With the dishonourable exception of the entrance to ‘Houblon Apartments’, the 'poor door' to the 'affordable' housing in Relay House, Tyne Street has become merely a narrow service road for that building and London Metropolitan University's Calcutta House annexe to the west. It is the truncated remains of a street known until 1937 as Newcastle Street, created in the early 1730s as New Castle Street, to distinguish it from neighbouring Old Castle Street. It was an extension and expansion of Three Bowl Alley, a yard off Whitechapel High Street, its west side encroaching on what had been the south end of Castle Street.1

The formation of New Castle Street was complete by 1734 when William Newland, the developer and an attorney on Gracechurch Street in the City, leased forty small houses, stables, a brewhouse and a warehouse to Thomas Peckham, a musician.2 New Castle Place, a network of four narrow alleys begun at the north end of New Castle Street in the 1730s, was extended south, mainly in the first years of the nineteenth century by the bricklayer Thomas Barnes (d. 1818) and his business partner, John Cass (d. 1805), a Whitechapel High Street haberdasher. The properties were thenceforward managed as part of the Barnes estate.3

From its opening in 1732 the Three Crowns public house was at New Castle Street’s north-west corner with entrances there and in a projection onto Old Castle Street, opposite the King’s Arms Brewery. Until the 1760s it was run without a licence by John Dumbleton (d. 1766).4 In 1755 Robert Hawkes successfully applied to be discharged from an apprenticeship with Dumbleton:

‘For the whole eleven years … instead of being learnt his trade of a pump maker he hath been almost constantly employed in drawing of beer, both Sundays and working days and has never been suffered to go to Church once … And the petitioner hath undergone violent severities and usages … during the whole term ... by being beat with sticks and whips and by flinging petitioner in a horse pond on a cold frosty morning without the least provocation. And on the 14th day of March last the petitioner’s master knockt him down with a hand saw and beat and bruised the petitioner so violently that he was not able to see out of his eyes for some days.’5

The Three Crowns remained in business till the 1920s, when it reverted to residential use. It was demolished around 1966.6

The Green Man public house, an inn of similar character on the west side of New Castle Street was also part of Newland’s original development. In its early days it was a kind of annexe to adjoining stables, landlords Francis Milson and Henry Davis (d. 1748) using it as a base for the sale of donkeys for milk, and for hiring horses to collect hay and straw from Essex.7 In the 1840s the Green Man’s landlord, John Clarke, ran the United Helpmates Birmingham Benefit Society and Coal Club and subscription clubs for cheap life insurance and coal. He also hosted dog fights and boxing. A low-life, low-rent character endured into the 1870s when the Green Man was raided as an illegal gambling den; only pennies were recovered.8

By 1884 a synagogue known as the Bikkur Cholim Sons of Lodz Chevra had been formed at the former Green Man. It was described in unfavourable terms in 1888: ‘there is a synagogue on the first floor, which is approached by a disgraceful staircase, and … there is no provision to enable women to worship. On the ground floor of this house is an eating house where there is reason to fear gambling is not unfrequently practised, while the upper floors are occupied by many poor families crowded together’.9 The landlord of the eating house had been and would again be prosecuted for unlicensed gaming. The congregation appears to have moved to New Goulston Street in 1896. The building was subsequently divided into tenements and then cleared by 1931 for the building of the Brooke Bond staff-welfare centre, now LMU's Calcutta House annexe.10

There had been some rebuilding on the estate in the nineteenth century, as on New Castle Place, where houses replaced stabling at the south end in 1853–4, and four somewhat deeper houses were inserted in 1897–8. But by 1914 the estate’s houses were invariably described as ‘old and dilapidated’.11

The whole Barnes estate, mainly in Stepney, passed to Thomas Barnes’s granddaughter, Ann Pemberton-Barnes (d. 1912), and was run as a limited company from 1924. There were some bomb-damage losses on the east sides of what had become Tyne Street and Tyne Place. The rest of this enclave was sold to the London County Council in 1966 for the building of the New Holland estate, and the houses had been cleared by 1970.12

Bradbury Court, site of Evershed House
Contributed by Survey of London on Dec. 20, 2018

Bradbury Court is a five-storey block of affordable-rent flats, built as part of the regeneration of the New Holland estate. Its roof features photovoltaic panels and the wall finish is rain-screen cladding.1 It is named after Bradbury House, part of the New Holland estate, which stood on the site of Kensington Apartments.  The building that stood on the site of Bradbury Court was Evershed House, a block of 16 flats run by the Toynbee Housing Association. It wa sopened by the Prime Minister Edward heath on 23 September 1970 and named after Lord Evershed, Master of the Rolls, who had been Chairman of the Toynbee Hall Council from 1954, and had forestalled attempts in the 1950s to move Toynbee Hall out of Whitechapel, and an approach in 1960 by the LCC Planning and Valuation Department’s to take the site of Toynbee Hall for part of its comprehensive redevelopment plans.2 Like most of the low-rise blocks on the New Holland estate it was a rectilinear concrete-framed block, faced in dark- grey brick, with strips of expressed concrete floorplates. Evershed House was demolished c.2013 as part of the regeneration of the New Holland estate, which had been handed over to EastEnd Homes in 2005. New Evershed House further up Old Castle Street was its replacement. 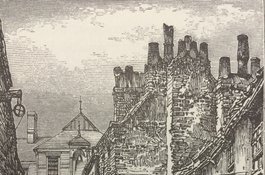