20-22 Whitechapel Road
Back to Map

Site of the People's Market of 1867, adapted by William Booth to be a mission hall and used as Salvation Army premises to 1926, cleared 2017

There were coach-makers on this site and a yard behind through the eighteenth century up to the 1860s. John McCall, a Houndsditch provisioner, redeveloped the site in 1867 to be the People’s Market, a capacious galleried and tile- paved hall under a timber-trussed top-lit roof using the full extent of the former coach-making yard behind the sites of Nos 20–26 with a three-storey entrance block at No. 22 . Built at a time of great impoverishment following collapse in the sugar industry and a banking crisis, with local bread riots of 1855 and 1861 not a distant memory, it supplied cheap groceries, shoes, books and hot soup (300 gallons a day) to working people, with a three-storey entrance block on the site of No. 22. McCall was rapidly undercut and a year later William Booth’s Christian Mission (forerunner of the Salvation Army) acquired the property and by 1870 had adapted the hall through Habersho and Pite, architects, to be the People’s Mission Hall, seating 1,500. A house of the 1760s at No. 20 was also acquired to provide a People’s Soup and Coffee House and other welfare services and the two façades were given a unifying striped treatment. There was further reconstruction in the hall in 1874 with G. Jackson as architect. This was what came to be known as the Salvation Army’s headquarters until 1881. The premises continued to be used by the Army as a food and shelter depot and the headquarters of its men’s social work up to 1926. There was warehouse use for Buck & Hickman by 1950 and the Victorian front buildings came down in the 1960s and were replaced with a single-storey warehouse.1

This was replaced in 2016-18 with a six-storey office building. The scheme for Alternative Developments Ltd by Rivington Street Studio Architects was taken forward by Whitechapel Road Developments with Modus Workspace Ltd as the principal contractor. It included refurbishment of Nos 24–30, long vacant. In the event Nos 24–26 were demolished iand replaced in a replica form.2

I wrote a feature in The Salvationist magazine on 20/22 Whitechapel Road (28 Feb 2015), called 'The First Corps', as it was the Army’s first official Corps, then a large Men’s Shelter, till blitzed in the Second World War. In its place a smart new office building is rising – where once beds were fourpence! I hope the new owners put a deserving plaque there. It also appears in Margaret Harkness’s Captain Lobe (1889), and in A City Girl (1887), recently republished. 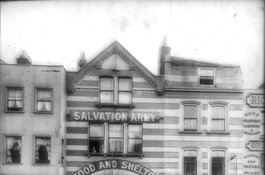 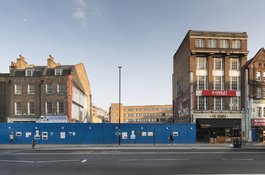 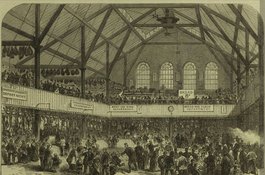