‘The men behave remarkably well […] and many of them form friendships and club together their means both for food and lodging, so that when one is out of work his neighbours help him. […] The most comfortable-looking room in the Victoria Home is the large hall where the men can read the newspapers, and where meetings and services are held, but the whole house is bright, cheerful, and well-warmed, and the men I saw seemed thoroughly comfortable. Recitations and music brighten the winter evenings.’1

The Victoria Homes, founded in the late 1880s by a group of philanthropic businessmen led by Lord Radstock, were two large-scale model lodging houses for working men in Whitechapel. The Victoria Homes were more austere than Rowton Houses and the London County Council's model lodging houses, and the lodgers were required to be respectable and sober. The first Victoria Home opened in 1887 at 39 & 41 Commercial Street (on the site of Ladbroke Court), at the corner of Wentworth Street. Victoria Home No II opened its doors at 77 (later 177) Whitechapel Road in 1891. Enlarged in 1897, at around which time it had ‘front’ and ‘centre’ buildings, the Home lay behind Whitechapel Road and occupied part of the site to the west that was later taken by the neighbouring Booth House. For a few pennies per night (4d or 6d in 1902-3), the Homes offered warm communal rooms on the ground floor with dormitories above. In 1919 the Salvation Army bought 177 Whitechapel Road and took over the management of the shelter and its 450 lodgers. They demolished Victoria Home in 1993 and redeveloped the site with Victoria Court.

The frontage at 177 Whitechapel Road was open until the 1890s. A yard to the rear (behind the sites of Nos 163–175), once part of the parish burial ground of 1614, pertained to Davenant School from 1767 to 1860 when it was sold to Bryant and May, general merchants and ‘lucifer’ or patent safety match manufacturers. William Bryant and Francis May had started importing matches in 1850 on Fenchurch Street and Tooley Street and, having obtained a patent for safety matches, were selling millions of boxes by September 1860 when they moved their headquarters to Whitechapel, from where they oversaw the building in 1861 of Fairfield Works in Bow, which was managed by Wilberforce Bryant and destined to become a notorious ‘model factory’. The firm’s general wholesale merchandising continued from the Whitechapel Road office and warehouse depot, managed by Francis May until he retired in 1868. The business was given up in 1873 and the property transferred to the Albion Brewery.1

Bryant and May’s Whitechapel Road property was sold in 1889 for the building of a Victoria Home for Working Men, a project seen through in 1890–1 with W. Gillbee Scott as architect and W. Hearn & Co. of Lancaster Gate as builders. The warehouses were replaced with a three-storey residential range, still leaving the frontage open. This was the second such home, following premises at 39–41 Commercial Street (see Rebecca Preston's contribution). The Victoria Homes had been founded around 1886 by Granville Augustus William Waldegrave, Baron Radstock, in partnership with other trustees, setting out to provide a better grade of accommodation than that available in lodging houses, with higher prices and a Christian mission. They were, however, more austere than the Rowton Houses that soon followed. A five-storey infill roadside block was added in 1896–7, with W. Howard Seth-Smith as architect, James Smith and Son of South Norwood, builders. It incorporated fire-resistant iron and concrete internal construction. Augustus Wilke was the first keeper and the premises, altogether designed for 500, housed 628 in 1903 and had 586 beds around a decade later. They comprised: in the front block, a ground-floor reading room (with billiard tables by 1903), basement dining hall and upper- storey dormitories; and in the back range, a ground-floor reading room (a chapel from 1903), basement dining hall with kitchens to the west, and elsewhere dormitories. An enclosed yard was used as a recreation ground.2

Financial difficulties caused by a severe loss of custom through the First World War led to a takeover of the establishment by the Salvation Army in 1918–19.  Charges were 5_d_ a night for dormitory accommodation, 7_d_ for one of 128 private cubicles. Use declined until the premises were only housing about 200 men. The Victoria Home closed in 1984, its residents transferred to the now adjoining Booth House.3

It was rebuilt in 1995–6 by the Salvation Army Trustee Company (David Greenwood, chief architect), engaging GHM Architects Ltd (Ken McFadzean, job architect), and Lovell Construction Ltd as builders. This six-storey stock- brick-faced building is even more starkly forbidding than its predecessor. It was built to provide forty-three flats for single homeless men, along with workshops and service rooms. From its front block a glazed link connects to three-storey stock-brick-clad and hipped-roof rear ranges more or less on the same footprint as their predecessor. Now called Victoria Court, these premises are run with Booth House by the Salvation Army Housing Association. The Salvation Army has stopped using the term ‘hostel’, seeing it as carrying negative connotations, preferring Lifehouse.4

Between 1959 and 1982 the photographer John Claridge photographed the men and women who stayed in Victoria Home and Booth House, as described by the Gentle Author in spitalfieldslife.com in 2012:

Parish burial ground, almshouses and workhouse
Contributed by Survey of London on Aug. 24, 2017

Richard Gardiner was Whitechapel’s Rector in 1614 when parish churchwardens oversaw the acquisition of a rectangular plot of about an acre and a half of manorial common land encompassing the roadside frontage now represented by 151–179 Whitechapel Road. Seemingly in part enabled by a bequest from George Clarke (d. 1606), a Vintner, almshouses with sixteen rooms for as many widows were built on the western part of this then remote road frontage. In 1615 the rest of the site, enclosed by a brick perimeter wall, was consecrated for use by the parish of Whitechapel as an overflow burial ground called ‘the Great Church Yard at the Towns end’. By 1654 this was referred to as ‘the poors land’. A passage on the site of Davenant (formerly St Mary) Street, present by the 1660s for access to the walled garden behind, came to be called Burying- ground Court.1 A charity school was built on the east end of the burial ground in the 1680s (see 179 Whitechapel Road), yet this was still thought to be at the ‘Townsend’ in the 1730s.2

Following an enabling Act of 1763, the almshouses were replaced by a more extensive parish workhouse in 1765–8, Whitechapel’s first and smaller workhouse of 1722–4 on Alie Street having long since been found wanting. The 1760s workhouse, described as ‘a plain, modern, extensive, and commodious erection’,3 was in line with the school building that survives at No. 179 along almost the whole of the burial-ground frontage. It housed 600, making it among the country’s largest workhouses – on a par with those of St Marylebone and Liverpool; only the West End parishes of St James, with 650, and St George Hanover Square and St Martin in the Fields, each with 700, had more inmates in the 1770s.4 The adjacent school had been given leave in 1767 to take further eastern perimeter parts of the burial ground. Thus the last open ground to Whitechapel Road this far west was built over. In 1795–6, the rest of the burial ground having become the workhouse yard, the parish took a larger rectangle of what had been orchard ground immediately to the north to be a new burial ground for the poor and enclosed it with a brick wall. The workhouse was enlarged in 1812 and the western part of the new burial ground given up in 1813–15 for another school. A ‘deadhouse’ (mortuary) at the west end of the workhouse was removed to improve access to this school on what was now St Mary Street, leaving the master’s house as the corner building. The eastern part of the burial ground, extended to the rear of No. 179 in 1813, was divided off with iron railings and used for parish burials up to 1853.5

The workhouse beadle was censured in 1833 for supplying bodies for anatomical purposes, cholera having meant that 196 fatalities had been interred in the ‘workhouse garden’ adjoining to the east (behind Nos 181–185), which later became the workhouse’s stone yard. In 1838 Dr Thomas Southwood Smith’s report to the Poor Law Commissioners more generally deprecated conditions, finding that 104 girls slept in a dormitory 88ft by 16.5ft, four or five to a bed; even in the fever wards beds were shared. The Poor Law of 1834 had united the parish of Whitechapel with other districts to form the Whitechapel Union. In 1855–60 what had been Spitalfields’s workhouse, just outside Whitechapel parish to the north of Thomas Street and the Quakers’ Burial Ground on what is now the east side of Vallance Road, was rebuilt to unify and consolidate the Whitechapel Union’s workhouses. The redundant Whitechapel Road workhouse was demolished and the property sold off.6 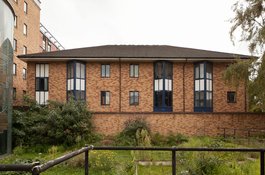 Victoria Court in 2017, view from the north from the site once used as a burial ground
Contributed by Shahed Saleem