16 to 20 Middlesex Street
Back to Map

The first rebuilding of the the war-damaged site of the 1880s warehouses, six of which survive further up Middlesex Street at Nos 38 to 48, was a solitary four-storey showroom and workshop building at 16-20 Middlesex Street put up in 1954-5 by the Demolition and Construction Co. Ltd for Winifred and Lucy Mendes to the designs of the cinema architect George Coles.1 It was similar to many low-cost post-war rebuildings, such as 84, 87 and 94 Whitechapel High Street, brick-faced with strips of steel-framed windows set within slim concrete framing. From the late 1950s to 1977 the shop was in workshop use for the Modern Knitwear Co. Ltd and known as Modnit House.[American Import and Export Bulletin, 1960, p. 465] Nos 16 to 20 Middlesex Street was demolished in 2016 as part of the redevelopment of the site for the Travelodge London City. 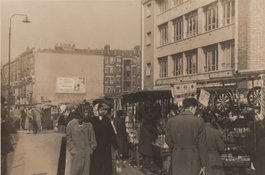