Hughes Mansions
Back to Map

memories happy and tragic of Hughes Mansions
Contributed by Survey of London on May 8, 2017

Hughes Mansions were completed in 1929 and comprised three blocks of flats that were well appointed and much desired by East-enders living in cramped and very basic tenement houses. My memories of living there are pleasant ones of a village-like atmosphere where families of different backgrounds lived amicably with each other. It took its name from an active and charismatic member of Stepney Council's Housing Committee, Mary Hughes JP, the daughter of Thomas Hughes the author of Tom Brown's Schooldays.

On the night of 10/11th May 1941 during the last aeroplane attack of the war on London, small bombs straddled the front of the flats and my wife's mother was killed - the only fatality.

Almost four years later there was the tragic horror of March 27th 1945 when a V2 rocket made a direct hit on the centre block completely demolishing it and most of the third block and severely damaging the front block. 130 people were killed - including lots of my friends and families I had grown up with. The two back blocks were much later rebuilt. How strange and bizarre it was that the first bombing death in Hughes Mansions came about in the last aeroplane raid on London and those 130 fatalities resulted from the last rocket attack on London. 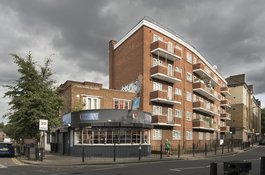 Hughes Mansions (with the former Royal George public house), from the northwest in 2018
Contributed by Derek Kendall 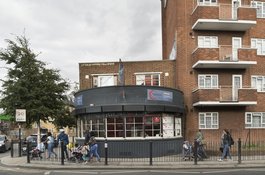