3 Gunthorpe Street
Back to Map

Until 1912 Gunthorpe Street was known as George Yard, named after the George public house, which appears to have stood on the route’s west side, towards the north or Wentworth Street end, on part of the site now occupied by Broadway House. The George was present before 1560, having been leased by John Feellde (Field) to John Biges. It survived as a pub until 1823.1

In 1580 John Brayne, a former Bucklersbury grocer who had financed the Red Lion playhouse at Whitechapel’s eastern margin in 1567, and who owned a stake in James Burbage’s The Theatre in Shoreditch, took a twenty-four-year lease of the George. He intended to establish a theatre in its yard, but failed to see the plan through and was deep in debt at the time of his death in 1586. Litigation between Brayne’s widow, Margaret, and his business partner, Robert Miles, a goldsmith she accused of murdering her husband, reveals something of the use of buildings surrounding the George, and that the lease passed to Miles.John Hibbeyhad a cooperage in the stable yard, and a mill was used for soap-making, by James Norman in the 1580s, and Miles’s son Raphe in the 1590s. Christopher Ocland, writer of historical verse, lodged at the George in 1589.2

The Black Horse was a long-lived presence further south on the west side of George Yard, a disreputable inn with a large stable yard, about 60ft deep and 45ft wide. Adjoining to the south was a narrower stable yard, evident by the 1670s and labelled Black Horse Yard on Rocque’s map of 1746, a mistake perhaps occasioned by the fact that the inn separated the two yards. The first clear mention of the Black Horse inn comes from 1732 when Jonathan Ellwood was running it as an unlicensed ale-house. By 1736 he had died, holding a lease of the inn and stable-yard from Joseph Tantum, a Quaker joiner and cabinet-maker once of Houndsditch, then of Stratford.3 That year a George Yard coachman was apprehended for carrying smuggled tea, and in 1750 a highwayman was apprehended in Black Horse Yard, ‘well mounted … a bold and daring fellow … pitted with the Small-Pox’.4 In 1786 the landlady Elizabeth Jones and her brother-in-law, James Jones, a coachman who kept his coach in the inn’s yard, were committed for perjury having given false alibis in a capital trial for burglary. The Black Horse, ‘the cadger’s hotel’, had a transformative afterlife from 1875, when it reopened as a ‘home for houseless girls’ with an evening Sunday School, part of the George Yard Mission and Ragged School. The narrow and lesser stable yard to the south was known as Batt’s Yard in the 1840s and ’50s, after Philemon Batt, a farrier, Jacob’s Yard in the 1870s, and Hall’s Yard from the 1890s.5

George Yard, generally inhabited by poor labourers, continued to feature in lurid descriptions of crime and poverty; it was ‘a place of dangerous appearance’.6 The House of Commons Committee on Mendicity and Vagrancy in 1815–16 singled out George Yard as ‘forty houses, in which lived two thousand persons in a … state of wretchedness’.7 It was described in 1822, in an account of a theft committed by two residents of a brothel there, as ‘that receptacle of all that is vile – George Yard’.8 Henry Mayhew presented a more nuanced picture in 1861. He found George Yard a ‘narrow, dirty and overcrowded street’ and described lodging houses, typically charging 3d. a night, one having a large kitchen 35ft long with a framed over-mantel picture of the 'Great Eastern' steamship, tables and benches around the walls for the residents – beggars and dock labourers, bonepickers, crossing sweepers, and shoeblacks. In some lodging houses he saw ‘a large number of low thieves’, in others ‘plainly but decently dressed’ women, and a ‘respectable mechanic out of work’.9 John Hollingshead, visiting around the same time, noted George Yard as an ‘English Colony’, in contrast to the Jews who predominated in Tewkesbury Buildings and the Irish in Inkhorn Court and elsewhere.10

George Yard survived the road widenings of the 1880s, but slum clearance saw most of its buildings replaced between the 1870s and the 1900s. The north-west side was replaced first, with George Yard Buildings in 1875 and St George’s House in 1883. The east side had several squalid lodging houses, including one run by George Wildermuth at Nos 31–34, near the north end, which shortly before demolition in 1891 housed sixty-four single men, mostly labourers and porters, nearly half of whom were unemployed. The most notorious premises were misleadingly named Garden Court, which survived until 1899. Charles Booth’s researcher George Duckworth was blunt, classing its residents as ‘vicious, semi-criminal’, his police guide saying it ‘“doubles” as a brothel’.11 Old houses south of Hall’s Yard were demolished in the 1880s for Sir George’s Residences (No. 4), the Whitechapel District Board of Works took over the north-east side of George Yard in the 1890s, and Black Horse Yard was eradicated by the building of Commercial Street (Canon Barnett) School in 1900–1. The renaming of the street in 1912 commemorates John Gunthorpe (d. 1498), a priest, courtier and diplomat who was Whitechapel’s rector in 1471–2. Hall’s Yard persisted, consisting of stables with lofts, a two-room house and a smithy that became a cart shed, its south side including the former smithy in use as garaging until around 1975.12 Residential and commercial gentrification has crept into Gunthorpe Street since 2000, but the Dellow Centre, Providence Row’s homeless shelter, on a site at the north end of the east side that had been a council works depot, might be thought to be sustaining the spirit of George Yard’s most famous historic presence, the Mission and Ragged School founded by George Holland.

In 1885 the Whitechapel District Board of Works acquired the City Saw Mills site on the west side of Angel Alley with a Wentworth Street frontage, and a building to the south giving access to George Yard. There William La Riviere, the Board’s Surveyor, oversaw the erection of a ‘destructor’ – a furnace or incinerator for turning household rubbish into clinker. Manlove, Alliott, Fryer & Co. of Nottingham, who had patented ‘destructors’, were the suppliers. It was at the back of the site, approached from Wentworth Street by a sloping ‘creep’ for horse-drawn vans. A tall thin free-standing chimney stood alongside in the middle of the site.1

In 1891 the Board acquired the site of three George Yard houses and put up a small Coroner’s Court to La Riviere’s designs. The ground floor housed a coach house, office, disinfector and stores. On the first floor, reached by a rear lift and central stairs, there was a small court-room, witness and coroner’s rooms, post-mortem room, mortuary and infectious mortuary, and ‘catacombs’, for the storage of bodies. A special feature was an additional ‘Hebrew mortuary’ with a small connected ‘watching room’ for the Jewish practice of shemira, whereby the dead are watched over during the time, ideally only twenty-four hours, between death and burial.2

Within the decade the Board held all but the south end of the east side of George Yard. From 1898 to 1902 the depot was transformed, extended to the south and east across the north end of Angel Alley, now stopped up. Upon the reorganisation of London local government, the site passed to the Works Department of the Metropolitan Borough of Stepney. Robust new buildings, finished in hard red brick, were put up to the designs of Matthew William Jameson, the Whitechapel Board’s last Surveyor and, from 1900, the first Stepney Borough Engineer. A large new destructor or furnace house of 1899–1900 on the south-west part of the site survives as 3 Gunthorpe Street. Essentially a long shed to cover another Manlove, Alliott &Co. patent destructor, it was open on three sides on cast-iron columns, with lattice girders separating transverse roofs and six gables with oculus vents. Smoke was carried away by twelve steel chimney-pipes, stayed by wires. Elsewhere on the site there was a well, and water tanks were built over stoker’s cabins north of the destructor house. In 1902–3 Wentworth Street between George Yard and Angel Alley was slightly widened and the frontage redeveloped for a lodge, cart shed and smithy, the George Yard corner smoothed with a bastion-like curve, red brick banded with stone.The mortuary closed in 1901 and the Coroner’s Court in 1903, inquests moving to the London Hospital. Those buildings were adapted for storage and further stores, a carpenters’ shop and a foreman’s house were added to the south on George Yard. Finally, a clinker crusher, an open steel- girder structure about thirty feet high, was erected south of the chimney with a conveyor link to the destructor.3

Alterations between 1928 and 1937 included the addition of several garages and, with the destructor out of use, the removal of all the chimneys. A former Ind Coope beer store on the east side of what had been Angel Alley, was acquired along with a narrow yard giving access to Osborn Street and altered for the Borough’s public cleansing department. The depot, unscathed by the war, was used increasingly for storage and garaging and gradually fell into dilapidation. The former beer store became part of 17–25 Osborn Street and the northern half of the site was acquired around 1990 by Providence Row.4

Sherrington Mews (No. 3).The shell of the former destructor house of the George Yard council depot was adapted in 1984 for use by Toynbee Hall as training workshops, named Toynbee Workshops. These were largely reconstructed in 1996–7. The retained six-gabled brick west wall determined the roof form. An upper storey was inserted and the east side given a neo-Victorian Postmodern elevation with full-height glazed doors, clusters of cast-iron columns and panels of beige reconstituted-stone blocks with recessed red-brick courses. Early occupants came from the voluntary and care sectors, along with radical publishers and printers (Aidis Trust, Red Pepper and Aldgate Press). Since about 2014 the workshops have been known as Sherrington Mews and occupancy has passed to largely commercial architectural and design studios.5 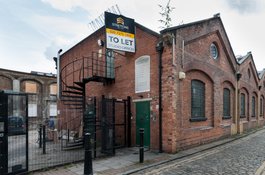 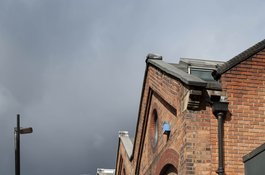 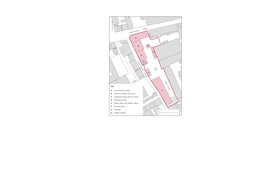 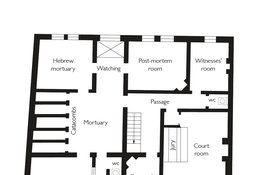 George Yard Mortuary and Coroner's Court, plans as built in 1891 - drawing by Helen Jones
Contributed by Survey of London