49 Gower's Walk
Back to Map

Examination of Ordnance Survey maps from the 1950s show a structure marked with a cross where 49 Gower's Walk is now. That is standard OS symbolism for marking a through-way with buildings above. The buildings above were two flats, one occupied by a Jewish family and the top one occupied by my father etc. The two flats were above an exit from Faircloughs, but were rarely used while we were there. The only use that I recall is for vast deliveries of coke for heating the Faircloughs buildings. The pile of coke came up to the bottom of the first floor. Both flats were coal-fire heated, and for our top flat, the coalman had to lug bags of coal up several flights of stairs, and the only place that we could store coal was in a small room between back and front bedrooms. The flat always smelled of coal.

As at 2010 or thereabouts, from a vantage point between Gower's Walk and Back Church Lane, it was possible to see the remains of no 48. I have a private photograph which shows marks on the northern wall of the soap factory at No 48 where the eaves of my bedroom butted up to it. I slept there.

Circa 1952, no. 49 Gower’s Walk belonged to Messrs Faircloughs the meat transporters, and at ground level consisted only of a pair of large wooden doors opening into part of Fairclough premises. Above these doors were two flats having a common front door at ground level. At that time I was a schoolboy living in one of these flats, and my bedroom looked out on to the huge Tilbury Warehouse opposite.

I have bought old images of Gower's Walk, showing where I lived, but copyright for these exists elsewhere. Some images I obtained from Tower Hamlets Archives, showing things before the current houses in Gower’s Walk were built. There were also buildings at nos 47 and 46 Gower's Walk, but by 1950 these had disappeared or were defunct. When doing my family research I made fleeting contact with a lady whose parents had lived at 46 Gower’s Walk. I have found that the volume of history just in the one block bordered by Gower’s Walk and Back Church Lane is mind blowing.

The discomfort of cycling over cobbles in the 1940s
Contributed by eric on Nov. 1, 2016

Early on my parents bought me a sit-up-and-beg bike. When I wore that out, they bought me a second-hand road racing machine, so light I could just about lift it with one finger. It had large-diameter thin wheels and a Brooks B17 saddle – not far from being just a strip of leather. It had one fixed high gear. Fine, but it wasn’t designed for the cobbles of Gower's Walk or London. At one time I could recognise individual stones in a set of cobbles outside our front door, and knew what to avoid. But I had to ride daily, else my bum would suffer. If for any reason I didn’t ride for a week or two then when I did, I knew I would have to renegotiate the pain barrier of ’hardening the bum for the road’.

Ours was the top-floor flat, with interesting storage places beneath the sloping roof. The floors were wooden, with much woodworm that we treated regularly. There were no carpets, though my mum made some by sewing small folded strips of material offcuts on to hessian backing. When first there, I was young and had a three-wheeled kiddies' tricycle, that I used to ride around. The noise that this made on the wooden boards annoyed the people in the flat below, and I was ‘told off’.

I also nearly killed myself at a young age. To me at one stage my trike was a fire engine, and a fire engine has to have a hose and somewhere to get water. Improvisation is a great thing. A section of old rope was the hose, and I tied one end of it to a length of electric cable I found lying around with a plug on the end and bare wires on the other.. I plugged the cable into a wall socket in our lounge. I remember right now finding my mum and saying that the cable had ‘bitten me’. I had had a narrow escape.

Faircloughs yards and the east side of Gower's Walk in the early 1950s
Contributed by eric on Nov. 2, 2016

As I walked it, ran it, cycled it, the Gower's Walk that I knew in the early 1950s was structured as I now describe. It runs roughly north/south and was cobbled throughout. The eastern side of Gower's Walk consisted roughly of three parts.

The top third, right up to Commercial Road, was ‘commercial’ and belonged to Faircloughs, the meat transporters. Mostly there were very tall brick walls, that had Fairclough loading/garage bays behind them, but in the middle of these was an entrance to the Fairclough Yards [on the site of 52 and 53 Gower's Walk], with a long on-high narrow office where arriving vehicles could be ‘clocked in’. There was also another wooden-doored exit/entry to Fairclough yards/garages, above which were two occupied flats, at no 49. Next door was no 48, a soap factory, and I believe that beyond that were the uninhabited remains of defunct dwellings at 47 and 46. No 46 was, I think, on the corner of Gower's Walk and Webb's Place before that was fenced off. At the very top of Gower's Walk was the side of a commercial building whose address was 52 Commercial Road, but it features in my memories.

This is about the previous property at 49 Gowers Walk, not the one present in 2016. When my family lived there in the 1940's and 1950's, the two flats had fireplaces, but nowhere to store fuel.

Our flat, at the top of the building had a small spare room between the two bedrooms, all three rooms backing on to the Albion Soap factory next door. We had to keep our coal in that. Our coalman was not happy to lug bags of coal up two flights of stairs, and because the floors had wood-worm we had to buy little and often. When my half-brother left the RAF after the war, he and his new wife were desperately looking for somewhere to live, and we could only offer to clean out our 'coal-hole'. Their faces gave their reply.

These are eighteen two- and three-storey houses that were built in 1994­–5 by the Mitali Housing Association, founded in 1985 to assist local families of Bengali origin, as the social housing portion of the development also at 109–129 Back Church Lane. The facades have a postmodern character in their use of red and yellow brick patterned to echo parapet gablets in front of monopitch roofs. The Gower’s Walk and Mitali Passage houses occupy a site that had included, from the south, Webb’s Place, cleared in 1937, a yard at No. 47 that was a cigar-box makers in the 1880s, later a builder’s store and sawmill, and a row (Nos 50–58), probably some of Joel Johnson’s eighteenth-century houses. By 1896 these were in the ownership of T. M. Fairclough, a haulage firm that occupied the yard behind, and which replaced the row in 1932. No. 49, a gabled red-brick three-storey building of two flats over an entryway to a small yard that came to be used by Faircloughs, had been built in 1906 as the delivery entrance and caretaker’s flat to the People’s Arcade. It had an improbable afterlife in 1984–9, as Exhibiting Space, a gallery that presented exhibitions, practical and theoretical workshops, lectures and recitals. It sought ‘a critical articulation of verbal and non-verbal signifying practices’ to ‘strategically privilege the productivity of irreducible plurality’.1 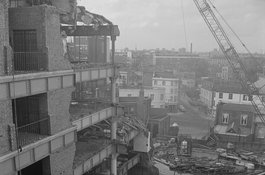