16-18 Whitechapel Road
Back to Map

A warehouse of 1852 here became a cigar factory in the 1890s. The site was redeveloped in 1938–9 to house a five-storey factory for Buck & Hickman Ltd. It was built by Killby & Gayford Ltd as engineering shops to replace premises the firm had in Vallance Road.

From around 2000 to 2015 the lower storeys housed the Rhythm Factory, a well- known bar and music venue. The premises re-opened as The Stable in 2016. 1

The archetypal picture of the Salvation Army's First Corps at 20-22 Whitechapel Road shows it adjoining, to the right, Nos 16-18 which, even before it became Buck & Hickman, was a tool and hardware outlet.

For five years in the later 1960s I worked here and, when not running messages to the lorry yard next door, or fetching jugs of tea from the basement, I sat typing in the middle window of the first-floor front (a Crittall window: Crittall was one of our prized customers). Luckily, it was not impeded by the HAMLET board shown in the 2015 photograph shown here.

From here I not only saw, but heard, the goings-on of the busy main road. There was the traffic: the dark-green Buck & Hickman lorries entering 20-22 via what had been the porch of the Army's First Corps (untouched by Second World War bombs), exiting from the back of its makeshift lorry yard (once the fine Hall and Shelter) to join the one-way traffic scheme. There was the noise of manual typewriters - my untrained two-fingered efforts far outdone by my envied colleagues at about 100 words per minute.

Then there were the bells from the long-lived Whitechapel Bell Foundry, the testing and the tuning. And one day, when I was unutterably sad because the kindliest of our officers at my nearby Salvation Army hostel had been moved, all the way to Dundee, they played 'Early one morning', in tune with my misery, causing smudging to my invoices:

O, don't deceive me;  O, never leave me.  How could you use a poor maiden so?

Lastly, there was the great flock of starlings that roosted on a nearby tree, making lovely sunset silhouettes on early winter evenings. 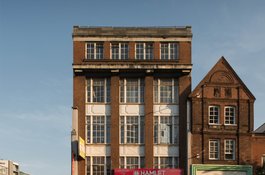