94 Whitechapel High Street
Back to Map

1956 shop and office building, with carriageway, formerly the entrance to Spread Eagle Yard

This is another workmanlike office building, designed in 1955-7 but not built till 1960-1 to the designs of Fitzroy Robinson and Hubert H. Bull architects (renamed H.V. Ashley & Winton Newman architects by 1960; M. Eker, job architect) on the footprint of the war-damaged former building, and retaining an entryway to what has been since the war a garage and latterly a car park.1 The site considered here includes No 94, long the site of an inn known variously as the Red Lion or more usually the Red Lion and Spread Eagle, and the car park which was formerly the inn’s extensive yard.

The name of the Spread Eagle inn is known from the second half of the sixteenth century when Thomas Bradshaw, probably the Thomas Bradshaw who was a son of Lawrence Bradshaw, the Surveyor of the Royal Works, who had held property further west in the High Street in the 1560s, was involved in a Chancery case over ownership of the Spread Eagle.2 A century later trade tokens marked ‘Thomas Grococke at ye Spred Eagle Tavern, Whitechapel, were issued and Spread Eagle Alley is listed in the Hearth Tax for 1674-5.3 It was known as the Red Lion and Spread Eagle by 1743, and often merely the Red Lion, an occasion for confusion as there was another Red Lion on the south side of street, and two others of that name further east.4 By 1757 it was a stage in a regular stage coach, a service that continued till at least 1810.5 It was also a repeated meeting place for Masonic Lodges in the 1810s and 1820s and again in the period 1890-1920. 6 By 1831 ‘the large room’ at the Inn was being used for auctions of business stock. 7 In 1835 election rallies were held in the Red Lion and Spread Eagle in support of Dr Stephen Lushington, the Reformer and abolitionist, and MP for Tower Hamlets 1832 to 1841.8

When the lease was put up for sale in 1839 the house was described as 26ft wide and 45ft deep, and in ‘the best part of the High Street’ convenient for the hay market, but it had been offered numerous times for sale in that difficult decade, and failed to sell, even without reserve. In the 1840s and 1850s various low entertainments – bare-knuckle fights, a Judge and Jury club (a type of music-hall entertainment with audience participation) the display of ‘a giant infant’ – were held, and a music licence was obtained by Thomas Bland, the landlord, who also operated as a musician’s agent. 9

In 1860 the lease was acquired by John Harris, who, following two fires in 1861, during one of which the potman was ‘burnt literally to a cinder’, rebuilt the premises in 1862-3.10 The solid, respectable-looking building (with ‘a handsome elevation in red brick, with Portland cement cornice and dressings’) was three windows wide with a mansarded attic with three pedimented windows and three large semi-circular-headed windows lighting the first-floor music hall ‘26ft by 31ft, a handsome lofty room… exceedingly well patronised’. There was also a ‘capital billiard room’ on the second floor.11 It held a music-hall licence until 1869, and competition billiard matches continued there into the 1900s, supplemented by competition boxing in the late 1880s.12

The building continued as a pub until c. 1923 when it became a wholesale drapers until it was ruined during the war, though patched up, most of the frontage surviving until rebuilding in 1960.13 The new building sits on the same footprint and may retain some fabric form the old building, still with an entryway to the cleared site of Spread Eagle Yard; it is five floors of shop and offices faced in brown brick with strips of metal-framed windows, industrially plain raw pink brick and exposed concrete frame to the rear. In the 1960s and 1970s it housed H. Fishberg Jewellers and the London office of Sir Joseph W. Isherwood & Co. Ltd, naval architects: ‘Isherwood House’ signage is still visible on the frontage.14 The shop has since 2008 been a mobile-phone repair shop, and the upper floors house solicitors and medical and dental practices offering services aimed variously at the Bengali and Polish communities.15

By 1666 there were at least fourteen small houses within Spread Eagle Alley, as it was called in 1674-5, mostly of one hearth.16 Until the nineteenth century it appears to have consisted of a small, square court immediately behind the inn, from which ran north a long T-shaped narrow yard lined with stables. By the mid-eighteenth century, the yard had been widened to accommodate increasingly commercial activity, stimulated, no doubt, by the stage coaches and industrialisation in East London. For around 45 years until his death in 1849, the stables were run by Charles Batley, stable keeper and horse-dealer, who recovered from bankruptcy in 1818 to supply horses, waggons and carmen to the Great Northern Coal Company at Granite Wharf, Wapping by 1848, and left a stock of 50 cart-horses at his death.17 By the 1840s the yard accommodated a livery stables. There were also, predictably, farriers – John Veal and Thomas Bramwell dissolving their partnership there in 1782.18 Watercolours of the 1850s and 1860s show an irregularly shaped stable yard with, either side, two-storey wooden stables with galleries over, and by 1861 seven households with 42 people were living in Spread Eagle Yard, many in these ‘rooms over stables’.19

When the lease of the yard was offered for sale in 1862 it consisted of stabling for 120 horses, covered cart standing, lofts, fifteen dwelling rooms, granaries, a dwelling house and gated entrances to the High Street and George Yard (via Black Horse Yard).20 Its character, however, was about to change. From 1865 until 1931, Spread Eagle Yard was associated with one of the two main hay and straw salesmen who came to dominate the Whitechapel hay market in the late 19th and early 20th centuries. Thomas Gardner (d. 1844), a hay and straw salesman living in Mile End, had run his business from the small yard of the Angel Inn abutting Angel Alley from 1825.21 His son William moved the business across the road to 48 High Street in 1865, joined by his brother George in 1867, but their yard was curtailed by the extension of Commercial Road so in 1875 they took an 80-year lease of Spread Eagle Yard. By that time the yard consisted of four separate stables, a two-storey office and a harness room on the west side, and covered yards for waggons to north and east, and a small cottage with a coachhouse adjoining the back of the pub, also on the east side.22 By 1880 they also had premises at St Dunstan’s Wharf, Narrow Street, Limehouse, reflecting the expansion of their supply chain from traditional sources in the Essex countryside, as importing hay became cheaper.23

The terms of the 1875 Spread Eagle Yard lease required the Gardners to spend £588 rebuilding the west side, and by 1890 they had replaced the old galleried buildings with a substantial new cart shed with hay storage above and another along the north side with concrete floors, as the first floor contained stables, reached by a ‘creep’ (horse ramp) from Black Horse Yard, off Gunthorpe Street. The stable/store building, complete with clock and weather vane (see below) also gave access to what had been Commercial Place/Sugarloaf Court, off Commercial Street, its buildings by then demolished, as a stand for haycarts.24 Gardners had also taken over the long narrow warehouse, previously part of No. 99 High Street, between the west side of the yard and Tewkesbury Buildings, from which it was accessed, in 1876, and the galleried timber-framed building on the east side by the back of the pub were rebuilt by Harris & Wardrop of Limehouse in 1888 as a caretaker’s cottage, along with another cart shed.25

The decline in horse transport and the need for hay was gradual in the 20th century and although Gardners left Spread Eagle Yard in 1931 shortly before the death of the 96-year old patriarch, George Gardner, the company remained in business supplying horse feed in Hackney till 1974.26

The journalist Thomas Burke offers a surprisingly bucolic picture of Gardners’ final days in Spread Eagle Yard, when the artist Pearl Binder (1904-90) was living there:

It is in one of the old Yards that Pearl Binder has made her home, and she has chosen well. She enjoys a rural atmosphere in the centre of the town. Her cottage windows face directly onto a barn filled with hay-wains and fragrant with hay, and a stable, complete with clock and weather-vane; and they give a view of metropolitan Whitechapel. One realises here how small London is, how close it still is to the fields and farms of Essex and Cambridgeshire.27

An application for a boxing and wrestling booth in the yard in 1939 was declined.28 After the war the ruins of Gardners’ buildings were adapted, and along with simple temporary shed along the north side of the yard, used, from 1947, as a service garage Pope’s Garage, later City and East London Service Garages, and additionally as a petrol station, with tanks sunk under the yard, augmented in the 1950s by further car workshops in adapted buildings in Black Horse Yard.29 The site was cleared completely around 1975 along with the former site of Black Horse Yard and, along with the site of Commercial Place (formerly Sugar Loaf Court), which had been mostly cleared in the 1880s, the rest destroyed in the war, the whole site has been a car park, part used by Blooms at No 90, the whole site acquired in 2011 by Alliance Property Asia Inc., based in the British Virgin Islands. The last application to build on the site was in 1981, when a plan for a playground, swimming pool and building with eight floors of offices was refused.30 A proposal by South Street Asset Management for a comprehensive redevelopment of 101-105 Whitechapel High Street that would see the car park landscaped as public open space is currently (July 2018) out for public consultation.31

This pub existed from aproximately 1839 to 1921 according to the Post Office Directory, belonging to multiple owners (male and female) including the Brown family in the 1880s and the Defries family in the early twentieth century. There was a high-profile robbery of the establishment in 1886. The publican was drugged before being robbed of £50. His attacker was sentenced to 18 months in prison with hard labour. 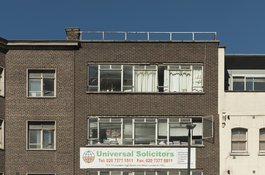