A 19th-century building, refronted as a public house in 1925–7 in 'Brewers' Tudor' style, now a Bangladeshi restaurant

This was the Black Bull public house from the early nineteenth century. Once taller, it was taken down a storey and refronted in a black-and-white Brewer’s Tudor style in 1925–7 by F. J. Eedle & Meyers, architects, for Thomas Barclay Ellis, the leaseholder, with Horace V. Clogg of Vallance Road as builder. A rear block appears to survive from the nineteenth-century building. The pub closed in 2007 and the premises have since been used as a restaurant, once the Bombay Grill, now a branch of Sonargaon, Bengali for ‘city of gold’. It retains a staircase from the 1920s.1

Family: My grandfather was once its publican
Contributed by steve on Nov. 5, 2016

The Black Bull on the corner of Whitechapel Road and Vallance Road was originally a William Youngers public house with a mock Tudor facade. This establishment has a special place in my heart as my grandfather was once its publican. My mother and her sister brought their children up within its walls, including my brother, sister and three cousins. It was a popular haunt for hospital staff. The Blackshirts found this out when they attempted a march through Whitechapel and the doctors etc. put a stop to it. 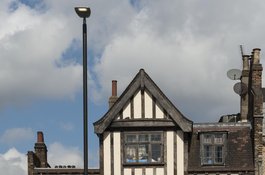