233 Whitechapel Road with 1 Court Street
Back to Map

1854 as a rebuilding of the Star and Garter public house, now shop and dwellings

This was the Star and Garter public house which can be traced back to the early nineteenth century (see Stephen Harris's contribution) and was perhaps older. It was rebuilt around 1854 on a 61-year lease and closed in 2001. It has a five-bay return to Court Street.1

This former pub at 233 Whitechapel Road was called the Star & Garter.  It was present here by 1807, when the landlady was a Mrs Chandler - we know this because she gave evidence in the Old Bailey trial of 23 year old Sarah Young, who was found guilty of stealing a watch from an elderly man who lived nearby and was sentenced to transportation for seven years.

For much of its history the pub was tied to the nearby Charrington's Brewery of Mile End Road.  From personal observation, in 1991 it was acquired by the Charles Wells Brewery of Bedford.  It survived for a further ten years before closing in 2001 and becoming a fast food outlet.

I returned to the Star and Garter in 1945 at the end of the Second World War after being evacuated to Slough to avoid the bombing. I was 18 months old when I left and 7 years old when I returned.

I lived with my maternal grandparents, Nathaniel (Jack) Joel and Rebecca Joel, her widowed sister, Leah Abrahams, and my paternal grandmother, Rachel Isaacs. Next door was a large menswear shop called Sabel Brothers. I attended Deal Street School until I was eleven years old and then went to Davenant Foundation School. 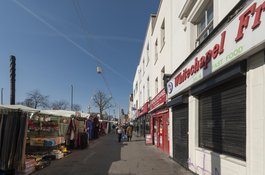 Whitechapel Road with No. 233 in foreground
Contributed by Derek Kendall 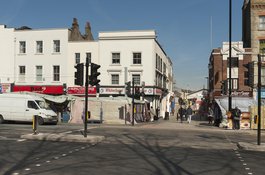