College East
Back to Map

For a hundred years between the 1880s and 1980s, College Buildings, a block of 'industrial dwellings', stood on this site and that of Attlee House. In 1883-4, as a consequence of the Flower and Dean Street Improvement, a slum-clearance and road-widening scheme of the Metropolitan Board of Works, one of the worst slums locally, New Court and the old frontage of Wentworth Street were pulled down. On the site, on the south side of the newly widened Wentworth Street and its hinterland adjoining Toynbee Hall, were built an extension to St Jude’s National Schools, College Buildings and a tennis court.1 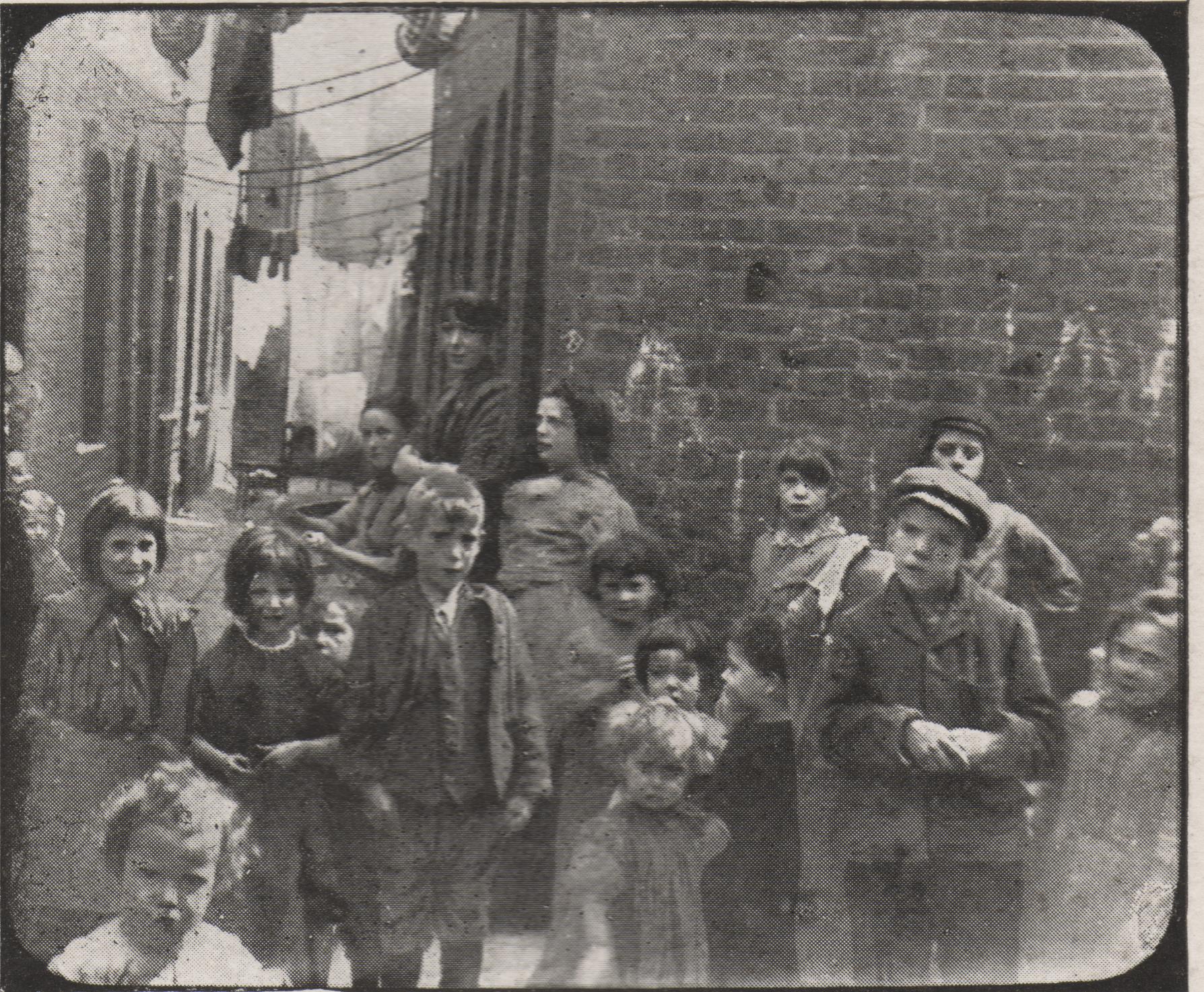 A Whitechapel slum, probably New Court, in the 1870s or 1880s, from Henrietta Barnett, Canon Barnett: His Life, Work and Friends, London 1918

College Buildings was aimed at a wider range of tenants than for example, George Yard Buildings, built the previous decade. It was built in 1886 by Williams & Son, builders of Thornhill Square, Islington, for a consortium which included Samuel Barnett of Toynbee Hall, and headed by Harry Levy-Lawson, later Viscount Burnham, a recent Balliol graduate and Liberal MP involved at this time in causes such as the Free Land League, and one of Barnett’s regular supporters.2 The block had a 150ft frontage on the newly widened Wentworth Street on the site of the rear portions of the old 94-100 Wentworth Street and the condemned Crown Court – the first development on land sold for the Flower and Dean Street Improvement.3 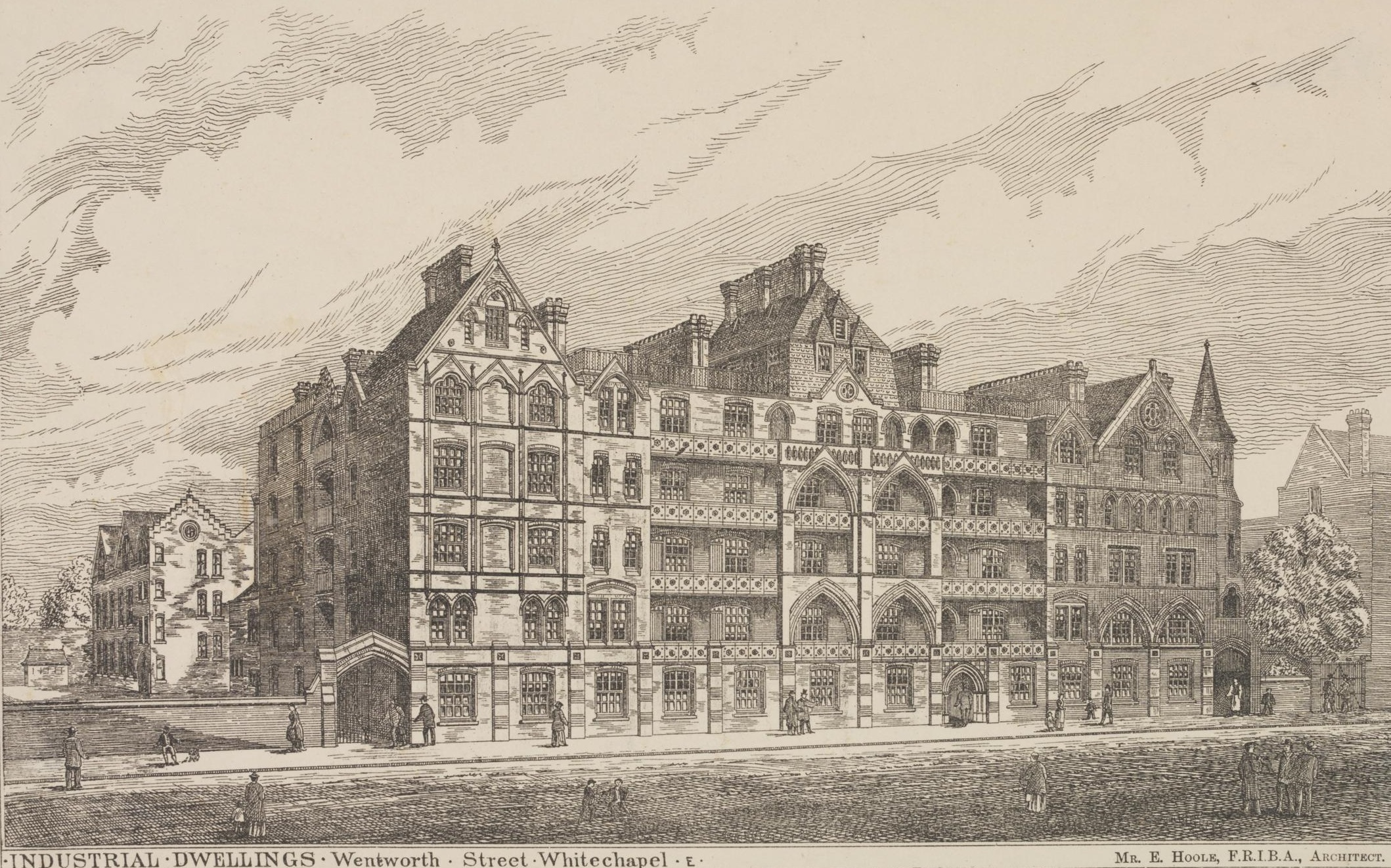 In mixing its type of tenant it was prescient of the development of the East End Dwellings Company, which was to find it more effective to mix single-room accommodation for the very poor with flats aimed at the skilled artisan – easier for the lady rent collectors to administer, and, perhaps, more likely to yield a five per cent profit.4 The 77 flats were one- , two- and three- roomed, with drying-grounds on the flat portion of the roofs. The building, in red brick with red-tiled roofs and, like Toynbee Hall, designed by Elijah Hoole, had considerably more architectural presence than those in George Yard, with a wide variety of Gothic windows and applied terracotta decoration. It was ‘built with some regard to beauty’, a conscious attempt to avoid the ‘barrack-like appearance too often characteristic of this class of dwelling’, because in Barnett’s view, ‘it is false… benevolence which provides for fellow-creatures things acknowledged to be ugly’, and ‘there is evidence that repulsive-looking buildings repel tenants’. Every living room had a sideboard, coal locker and range, though WCs were shared.5

College Buildings was unusual in having a co-operative element in its early days, when there was a tenants’ committee, ‘parties to the management of the buildings’, and after the landlord had cleared four per cent on the investment, the surplus was divided annually among the tenants in proportion to the rent paid. By 1889 that dividend averaged at £2 10s, and Barnett’s only regret was that if the tenants had allowed the dividends to accumulate, they might gradually have become owners of the building. It was the principle of the Tenant Co-operators and one pursued, at least for artisans’ cottages, at Brentham and Hampstead Garden Suburbs after 1900, where identical aims also went unfulfilled as tenants never owned ‘enough’ of their properties.6

In 1887 a further experiment foreshadowing Hampstead Garden Suburb, this time in mixing the social classes, came when the eighteen rooms in the western section of College Buildings opened as Wadham House, named after Barnett’s Oxford college, a collegiate hostel providing rooms and 7s or 7s 6d per week for the ‘schoolmasters, clerks and artisans’ studying at Toynbee Hall in the evenings, which Barnett hoped would introduce ‘into the heart of East London the elements of a residential university, and it promises to form a centre of social experience and of energetic practical citizenship’. A clubroom, billiard room and reading room were created by Hoole within a workshop adjoining the west side of Wadham House.7

Some of Barnett’s aims never came to be fulfilled. The occupancy of Balliol House (in Gunthorpe Street) and Wadham House was increasingly middle-class and the commitment to ‘the goal of connection’ was limited to fewer and fewer, as students preferred to commute from more congenial areas of London. Balliol House closed in 1913 and Wadham House a few years later.8

By 1970, although improvements had been made to the surrounding blocks now run by the Toynbee Housing Association for the Greater London Council - selective renovations and addition of bathrooms, to the designs of David Maney, architect, at College Buildings in 1967, for example – all the buildings were showing their age, and the GLC began rehousing tenants c. 1968 into the New Holland Estate.9 All but the eastern, renovated, section of College Buildings, now renamed College East, was demolished in 1970, the whole ‘proposed for eventual demolition’ by the GLC.10 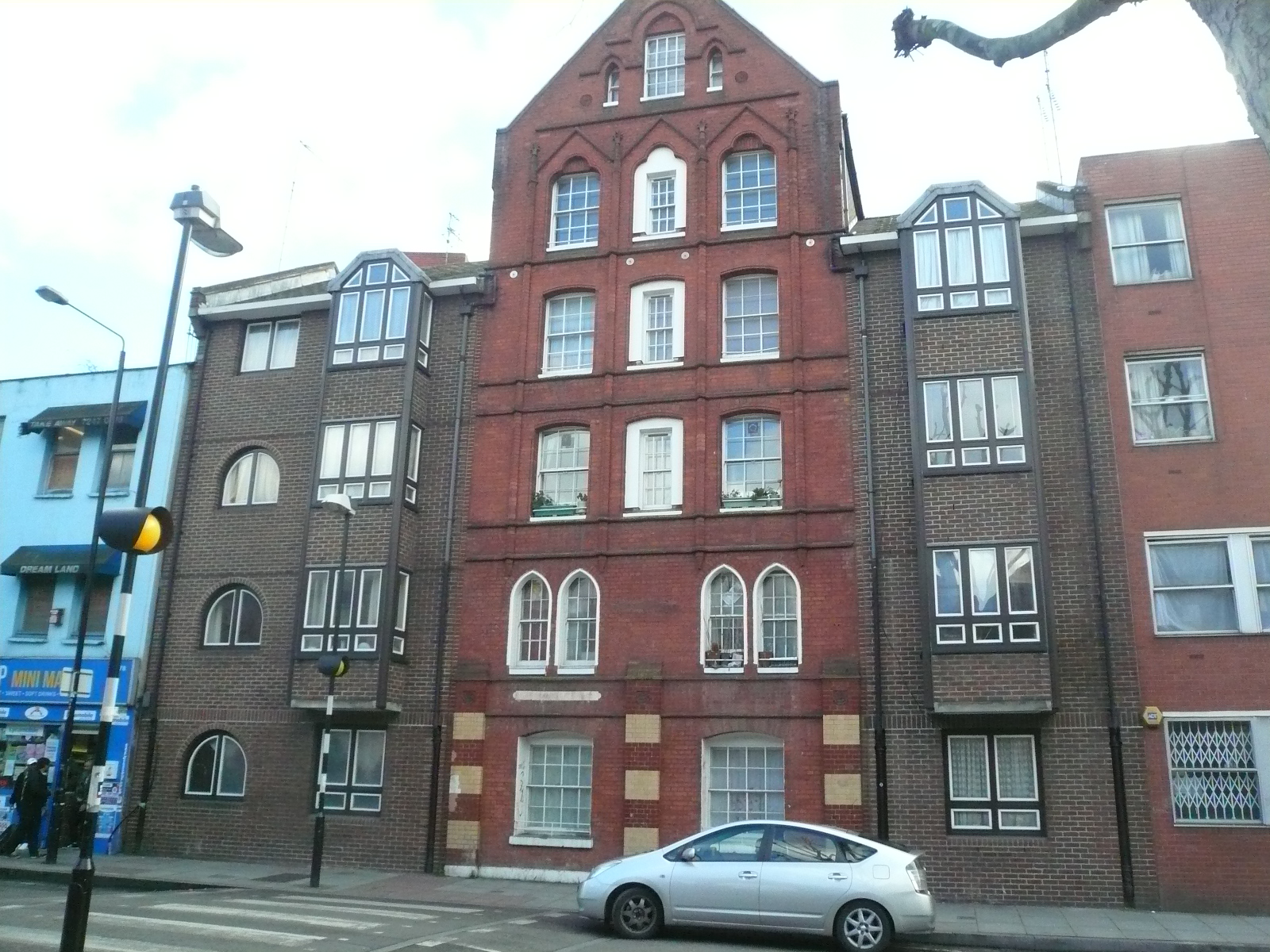 The 1984 buildings of College East and the retained frontage of 1886 of College Buildings, seen in 2015, shortly before the demolition of the 1980s buildings.

In 1980 permission was given to demolish the remaining College East (the scheme not carried out until 1984), the surviving part of College Buildings, all except for one bay of the frontage which was retained in the central six- storey portion of a new College East building, housing eighteen flats, that went up on the site, High Victorian red brick Gothic incongruously flanked by four-storey brown brick frontages with square oriels rising through three floors and semi-circular-headed windows.11

The 1984 building was in turn demolished in 2017, as part of the Toynbee Hall regeneration, though the 1886 retained frontage was retained once again as part of the new flats (named 'Billingsgate') currently (December 2018) under construction. 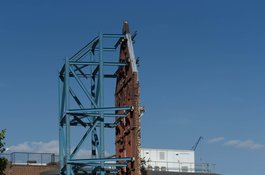 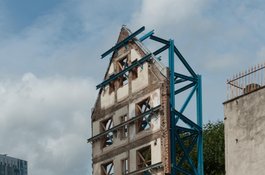 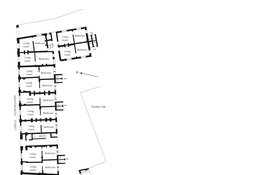 College Buildings, ground plan in 1886 (drawing by Helen Jones from 'The Builder', 13 November 1886
Contributed by Survey of London 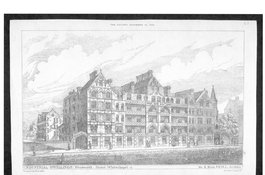 College Buildings, from 'The Builder', 13 November 1886
Contributed by Survey of London