17 Osborn Street
Back to Map

No. 17 Osborn Street is a single-storey building of 1949, erected by Ian G. Mactear, surveyor, for Woolf & Partners, monumental masons of Stoke Newington. It replaced three temporary Nissen-hut shops put up in 1947 for the site’s owners, D. Rose & Co., following bombsite clearance. The flat- roofed showroom and office had display windows to the front and side (the entryway to Swan Yard), the shopfront faced in black Vitrolite panels, the interior with black and white terrazzo. A rear workshop has a south-light roof and a small grinding room was added at the back in 1950.1

Woolf & Partners specialised in Jewish headstones. Around 1955 the business became a branch of A. Elfes Ltd, founded in Plashet Road, Plaistow, in 1894 by Albert Eugene Elfes (1871–1959). The grandson of Christian Prussian immigrants, Elfes found success through furnishing Jewish funerals and graves because of the proximity to his premises of the United Synagogue’s cemetery. A further branch at 130 Edgware Road opened in 1995, and an existing concern in Mile End was taken over in 1996, by which time the firm had passed from Elfes’s son Sidney’s hands to Mark Linley, who had married Sidney’s daughter. The Osborn Street branch closed in 2008 and moved to Gants Hill, where it continues as The Memorial Group with a head office in Aveley, Essex.2 No. 17 was in use for art exhibitions by 2012 and in 2013 opened as the StolenSpace Gallery, founded in 2006 in Brick Lane by D*Face (Dean Stockton), who moved the gallery when its premises were scheduled for demolition. It features artists, many of whom began as graffitists, and those who are ‘influenced by society’s prevailing subculture; where there are few rules and anything is possible’.3 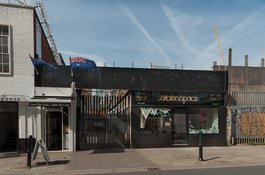