The Culpeper, 40-42 Commercial Street
Back to Map

1883 pub, the Princess Alice, reduced from 5 to 3 storeys after war damage. Later renamed City Darts. Since 2014 the Culpeper gastropub

From Princess Alice to The Culpeper
Contributed by Survey of London on Oct. 18, 2018

The Culpeper, formerly the Princess Alice, is a rebuilding of 1883 of a compact public house built by William Hooper, builder, of Kentish Town, in 1846 on the corner of Wentworth Street with the new Commercial Street. The first lesses were the brewers Elliot and Watney of the Stag Brewery, Pimlico, and it was named after Queen Victoria’s second daughter, born in 1843.1 A ventil-horn (a type of upright cornet) band operated from the Princess Alice in the early 1860s.2  In 1882 Wentworth Street was widened as part of the Goulston Street Improvement by the Metropolitan Board of Works , and the Princess Alice was demolished, and rebuilt by W. Shurmur, an early work of the architect Bruce J. Capell (1855-1943) of 70 Whitechapel Road for the then- owner, the Brick Lane brewers Truman, Hanbury & Buxton. It was on a larger scale than the old pub, as it was on a new corner site slightly further south incorporating the site of the warehouse at No. 40.3 The new pub was five stories high, in a robust commercial Gothic in red brick with moulded terracotta tiles to the second floor, soaring chimneys and a steeply pointed gable to the fifth floor on the Commercial Street frontage. There were formalised floral mosaic panels to the canted corner bays at second and third floors.

The Princess Alice was seriously damaged during the second world war and reduced by two stories. In 1985 the pub was heavily modernised internally and renamed the City Darts by the owner Thorley Taverns, during the 1980s darts boom when it sported five boards, though it reverted to ‘Princess Alice’ by 2005.4 In 2014 it was renamed again, during a major refurbishment as a gastropub which included the erection of a reclaimed 1940s greenhouse on the flat roof terrace for the growing of herbs and other produce, to which the pub’s new name, the Culpeper, after the herbalist Nicholas Culpeper (1616-54), alludes. Events including star-gazing, gardening, drawing and cocktail-making are are also held on the roof. Five letting bedrooms were created on the second floor.5

Some information on the Culpeper
Contributed by stephen.r.harris on Dec. 14, 2016

This pub was present in Commercial Street as the Princess Alice by 1850, when the landlord was listed in the Post Office Directory as James Budden.  The pub was named after Queen Victoria's third child Alice, born in 1843 and later to become the Duchess of Saxony.  By the early 1980s, the pub-sign was featuring the SS Princess Alice, which sank disastrously in the River Thames off North Woolwich in 1878, but the name of the pub clearly pre-dates that tragedy.

The pub was rebuilt in its present form in 1883 to the designs of B.J. Capell, architect of Whitechapel Road, with  a gothic element to the architecture.  It was a commission for Truman's Brewery of nearby Brick Lane.  Truman's registered the freehold of the building in 1928 and some Truman's signage is still visible on the exterior of the building today.

The pub features (as do most around here) in the tales of the Jack the Ripper murders, with murder victim Frances Coles and suspect John Pizer known to have used the pub.

Perhaps the best known licensee was Alfie Harris, who arrived with his wife Hetty in August 1935 and remained as tenant until his death in 1969.  It is said that Alfie kept the pub open throughout the second world war, even on occasions when enemy bombing fell uncomfortably close.

By 1986 the pub had been renamed the City Darts and it passed to the Thorley Taverns pub company.  The game of darts had long been a mainstay here.  Twenty years on and it became a freehouse, with the name reverting to Princess Alice. The latest change came in 2014, when the pub re-opened after refurbishment as Culpeper. 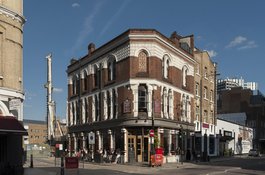 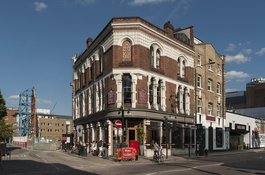 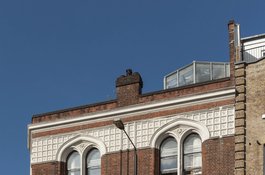