Following the opening of the London Muslim Centre in 2004, further enlargement of the East London Mosque's premises ensued to the south, beside Fieldgate Street on the site where the temporary mosque of 1975 and the imam’s house and mortuary of 1985 had stood. First plans for a building of up to seven storeys were submitted in 2006–7. These were revised up to nine storeys and the Maryam Centre was built in 2009 to 2013 in another design-build project led by Bamfords Trust, again working with Markland Klaschka, as at the London Muslim Centre. Costs of £9.5m were wholly met by the mosque’s fund-raising – £1.25m was raised in a single night in 2010.

The steel frame here is yellow-brick clad, echoing earlier buildings but more monochromatically with starker angular elevations, broken up by a smattering of generally small windows. A new Fieldgate Street entrance foyer for the mosque as a whole was part of the project. Its west side is the Alhambra donor wall, decorated with large-pattern geometric-Arabesque tiling that commemorates the donations that funded the project. The ground-floor hall is an extension of the mosque’s men’s prayer hall. A street-side staircase leads initially to other prayer halls, that on the second floor being for women. There is basement car parking and the rest of the building is dedicated to use by Muslim women in what is said to be the first such centre in Britain. There is a female-only gymnasium and classrooms, spaces for advice or guidance, healthcare and childcare. There are also some residential flats.

Haji Taslim Funerals, based at the Maryam Centre, commemorates Haji Taslim Ali (1915–1998), who had managed a Muslim funeral service from the East London Mosque on Commercial Road from 1950 with his wife Hajja Mariam Ali (née Josephine Mary Morgan). This couple also helped found Britain’s first halal butchers and ran a restaurant on Old Montague Street in the late 1950s. Their son Gulam Taslim succeeded as the Mosque’s funeral director.

Plans by Webb Gray & Partners Ltd, architects, to enlarge the men’s prayer hall yet again and to the east were approved in November 2015. They had not yet been carried forward in early 2020.1

The East London Mosque’s Whitechapel Road and Fieldgate Street estate achieved topographical wholeness with the acquisition of the former Fieldgate Street Great Synagogue in 2015. The mosque has grown rapidly and in a somewhat improvised though coherent manner. ‘The combination of religious, community, social and commercial space is manifest in a plan of complex alignments and spatial arrangements. This can perhaps be read as a metaphor for the emergence of British Muslim institutions through a strenuous, iterative and intensely negotiated process.’2

The 1873 map layer shows that the Maryam Centre sits squarely on the site of a sugar refinery, the later development of which took it almost to Whitechapel Road where the East London Mosque now stands. The sugar refinery was at 17 Fieldgate St, the building across the yard, beyond the gatehouse, was 16.

There had been sugar refining at two separate locations in Fieldgate St, the earlier record being 1736, but we don't get a true indication of who was working the refinery adjacent to Orange Row until 1817 when it was listed as James & Edward Friend. William Boden became a partner in 1821 and took over the company when the partnership was dissolved in 1830, following a fire the previous year. The 1851 census shows that Boden lived in the dwelling house at the refinery, while fifteen, mostly single, German sugarbakers lived in the men's room at no 16. Other sugarbakers would have lived in the streets nearby. Men's rooms, with many bedrooms and a mess room, had always been part of the larger London refineries, giving the newly arrived young workers secure lodgings and guidance from the one or two experienced workers who also lived in. The records for this particular refinery make it clear where the men's room was relative to the refinery.1

William Boden retired in 1851 and took himself off to converted salt workers' cottages in Clevedon, Somerset.1 The business was purchased by Sydney B Hodge. He ran it through to his death in 1878 when his son took over, but by 1882 it was losing money, production ceased and the extensive premises were put up for sale.2 The buildings were described in an advertisement in The Times: 'A brick built sugar house 67ft by 61ft of ground and 7 floors, warehouse brick built of ground and 5 floors, cistern house, dwelling house, and offices of 4 storeys and basement, sample room with gatekeeper's house over, manager's office, large stone paved yard enclosed with pair of folding gates, lofty brick built chimney shaft, steam engine house, and a freehold dwelling house no. 16 Fieldgate St containing 12 rooms and in the basement a mess room for the men. A brick built charcoal house 60ft by 55ft with ground and 2 floors over, smith's shop, and gateway entrance, brick built stable and store with dwelling rooms over, stoke hole in rear and yard, and a brick built dwelling house with 3 rooms with yard in rear.3

Visiting Whitechapel as a youngster
Contributed by Sarah Milne, Survey of London on June 3, 2017

Whitechapel had a sense of culture when I came to Whitechapel when I was younger. It was okay to be Bangladeshi here. We came to visit my uncle just outside the Whitechapel boundary from Yorkshire. My mum felt very at home here coming from Yorkshire. I remember being excited by going to a cinema on Commercial Road to watch a Bollywood movie. There was lots of Bangla media around: newspapers, the latest fashions, events. You could dip in and out of the culture. I felt part of it.

The first time I heard the call to pray was very memorable. It was like we were in a foreign country. You could see how different cultures were mixed together in London and it was okay. You heard of stories of racism but as a younger person visiting it wasn't something I thought about. The best thing was Whitechapel Market, it had everything that no one else had in Yorkshire!

I moved to the area later in life. My two daughters were born in the London Hospital before we moved out to Poplar. Since 1997 I've been working at the Wapping Centre(?), with women and Bangladeshi community in particular. I found that there was so much culture on our doorsteps but women were not coming out of their houses to engage with it. So I worked in various local centres to encourage women to be confident in different ways and to be part of the community. More recently I've been working at the Maryam Centre.

Mahera Ruby on how the Maryam Centre serves women
Contributed by Survey of London on March 9, 2018

Mahera Ruby, an academic and community activist, grew up in Whitechapel. Here she reflects on what the Maryam Centre provides for the women who use it.

'The Maryam Centre [is] one of our key achievements. We have a women’s project, Maryam Women’s Services now but it used to be called the Women’s Link. That used to be based at the mosque. So the mosque had two entrances: the women’s entrance and the men’s entrance. Even though women could still come in to use the services, I think they still felt a bit [uncomfortable] if they were coming in for, say, domestic violence or whatever troubles they were facing. With the Maryam Centre, it’s wonderful because they have [a] totally anonymous entrance.

There’s a gym there, there’s the prayer space. And because it’s separate, very separate entrance, I think women feel much much more comfortable accessing those services. There’s counseling available now. So those kinds of services [have] been great for those women. But also for classes, so there’s a lot women’s classes that take place.

Personally, I feel we could’ve done better. The Maryam Centre could have been better utilised. I would have loved to have had that ground floor hall to be ours too. [And] the lovely entrance, rather than us having that little entrance on the side. But we are working towards it.

Because at the moment I feel it’s a bit sad that sometimes we may have to share the lift with people who have passed away in coffins. It’s a good reminder, but it’s not the nicest thing to experience.

[The women’s prayer hall is on the 2nd floor] the whole floor. And it is nice, it’s quite nice. But I miss the gallery [the women’s prayer space in the 1985 East London Mosque building], because I think [there] we were at the heart of the mosque. Here, we’re a Centre.

It does feel separate. A lot of people like it, I mean, women do prefer that because in this area, this is the only women’s centre. We used to have Jagonari across the road, we don’t have that anymore. So in terms of women’s services, this is one of the community-sensitive, culture-sensitive services. And we do get referrals of other cultures and faiths too, so it’s not just restricted to Muslims.

[The Maryam Centre] really did make sense [as] the usage by women [was] increasing. The gallery just wasn’t [enough to] contain the women and the numbers, particularly Friday prayers, tarawih prayers, and it was becoming quite impossible. So I think it just made sense that women needed a bigger space. And [the] Maryam Centre was born.'

The Prince of Orange
Contributed by Survey of London on Dec. 30, 2016

The Prince of Orange was a public house, in existence from at least 1797 to 1863 when its site was incorporated into the neighbouring Bryant and Hodges' sugar refinery.1 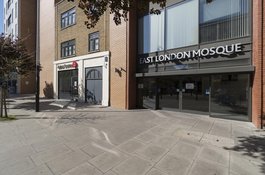