44 Middlesex Street
Back to Map

These six tall, muscular former warehouse buildings are the survivors of a range of seventeen that ran like a cliff down Middlesex Street when it was newly widened in the 1880s. The land had been bought from the Metropolitan Board of Works in February 1886 by Arnold Gabriel (1833-96), a dentist who had turned to commercial-property investment on an increasingly ambitious scale.1 The warehouse sites were leased and built up in 1886-8 by five builders, chief among them W. & F. Croaker of Great Dover Street and W. Mitchell of Reading who built six each.2 The architect was Marcus Evelyn Collins (1861-1944), son of the prolific warehouse architect Hyman Henry Collins, which may account for the young man’s swagger in the design, with giant white-brick pilasters rising through ground and first floor to Corinthian capitals, cement cornices between and full-height warehouse loops on the north sides of each warehouse.3 By 1911, several were in the ownership of the Clients’ Investment Company (Limited), founded in 1888.4 Use was generally by the rag trade, to which the full-height and width windows on ground and first floor were suited. Applications to demolish Nos 38-44 were refused or withdrawn in 1989-92 and the upper floors were converted to twelve flats, the loophole footboards retained and fronted with railings, in 1994. Since the Second World war, the ground floors have been in shop use. Nos 46-48, adjoining The Bell, were substantially rebuilt, with new rear windows in 1964. Its shops were refurbished and the upper floors converted in 2010 by Noble House Properties (Middlesex) Ltd to six large flats (No. 48A) as the Lofthouse to the designs of Tasou Associates, architects, expanding into the roofs, which were cut back at the front to create roof terraces. The shop units at Nos 46 and 48 retain a rag-trade association as Hilton Textiles, ‘the home of African fabrics’, specialising in West African waxed cotton.5 The other shops are currently (February 2019) a barber’s, an Argentinian restaurant and a news agent. 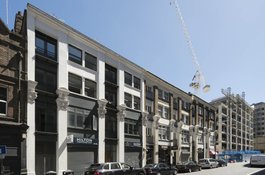 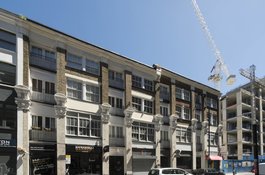 This film is only 26 seconds long but it is extremely early colour footage of Petticoat Lane Market, from the south end of Middlesex Street showing both the Whitechapel (right) and City sides (all now demolished) of the street, including the long range of 1880s warehouses on the right. Most of these were damaged in the war (38 to 48 Middlesex Street at the north end, being the only survivors) and eventually replaced in the early 1960s by Cromlech and United Standard House, itself now (2016) being demolished.