Hopetown
Back to Map

2005-7, Salvation Army Lifehouse, a women's hostel, replacing a predecessor of 1977-9 on this site and others on earlier sites nearby

Taking its name from the family that acquired the land hereabouts in 1643, Montague Street was in existence from about that time. In the 1680s another Montague Street was laid out close by to the north in Spitalfields (this later became part of Hanbury Street). By the 1790s the street in Whitechapel was regularly differentiated by a prefatory ‘Old’. The road was largely built up by 1700 and pubs included the Half Moon and Seven Stars, documented as present around 1730, and the King of Prussia’s Head, around 1770 by when the Cock and Key was on the south side, east of King's Arms Court, eventually No. 52. By 1840 the Cock and Key had become the Commodore. There was also the Black Bull, later if not always at what was eventually renumbered as No. 24 on the south side. John Frostick, the Black Bull’s victualler by the 1780s, owned property on the east side of Brick Lane. He or another John Frostick was a carpenter at a house on the site of No. 5 on the street’s north side, adjacent to what is now Frostic Walk, previously Frostic Place, which had a few houses on its east side by the 1790s. It had been preceded by Montague (later Manby Court).

Early Jewish presence appears to be represented by Moses Israel Brandon, a tobacconist on the north side in 1787. Joshua Levy was refining sugar on the street by the 1820s and by 1832 Kaufman Meyers, a cane umbrella stick and rib manufacturer and dealer in Russia mats, was at the top end of Osborn Street’s east side. With sugarbaking and distilling having been established to the south and dying to the north in the eighteenth century, it is unsurprising that other noxious trades arrived in the early nineteenth century, among them soapmaking, lamp-black manufacturing and scum-boiling. Courts of tiny two- storey houses were squeezed in: Montague Place (fourteen) between what became Nos 30 and 32 and backing on to Size Yard, and Easington Buildings (sixteen) between Nos 46 and 48 just west of King’s Arms Court, where the census of 1891 recorded 98 residents.1

Later nineteenth-century rebuildings for small houses and tenements included Nos 47–63, a row of 1887 called Pauline Terrace, and Nos 66–70 (Montague Houses) on the east side of Black Lion Yard, a tenement block of 1891–2 put up by Davis Brothers. By 1898 the street was ‘all Jews’, shopkeepers living above their premises. In 1909 a Passover Cake oven was built to the rear of the Black Bull, and in 1911 the pub was converted to shop use.2

The Chevrah Shass Synagogue (demolished) stood to the rear of 42 Old Montague Street, its name being Hebrew for ‘society for studying the Talmud’. A group that may have originated in 1875 settled here around 1896 through the conversion of a toplit warehouse. As at the nearby Great Garden Street Synagogue, which was somewhat larger, the building was squarish on plan and given galleries. Its entrance at the end of a short alley was distinguished through the reuse of ornamental double doors salvaged from Astley’s Royal Amphitheatre on Westminster Bridge Road. The synagogue was wound up by the Federation of Synagogues in 1959, and demolished in 1971–2 as part of a wider clearance programme.3

Old Montague Street remained generally low-rise retaining a number of open- fronted shops. In the early 1960s No. 36 was the Star India Sweet Meat Mart (Nawab Din, lessee, living with a family of eight above), and No. 44 was Eastern Grocers (Abdul Hannan Moklis Faron Miah Mazemmil Ali, lessee, with another eight or nine living above). Yet to Emanuel Litvinoff Old Montague Street remained the ‘heart’ of the Jewish quarter even in the 1970s, and Raphael Samuel looked back in the 1980s and recalled it as ‘the nearest thing in the East End to the way I imagined a shtetl … In its last days it still seemed to be an entirely Jewish street with vats of pickled herring occupying strategic places on the pavements, and shops which served customers at the window for want of internal space. Shops with no names but forcefully present proprietors.’ 4

The Greater London Council planned slum clearance around Old Montague Street from 1961. By 1968 the entire stretch of Nos 16–78 on the south side with attendant courts was set to go, but most of the demolition there happened in the 1970s. Clearance of the north side followed on, as part of the Hopetown Estate development.5

The Salvation Army’s women’s hostel on the south side of Chicksand Street known as Hopetown moved to Old Montague Street to make way for the Greater London Council’s Hopetown Estate development, against the wishes of Tower Hamlets Council which wanted fewer hostels in the borough. With Black Lion Yard and the south side of Old Montague Street cleared, the Salvation Army was given this site, larger than that on Chicksand Street, and the hostel went up in 1977–9 and was formally opened by Queen Elizabeth II on 20 February 1980. The project was undertaken by the Salvation Army Housing Association Ltd with the GLC and the Department of the Environment, and designed by the Salvation Army’s own architects under David Blackwell (John M. Maxwell, job architect). It used Broderick lead-faced panel cladding and had 107 beds in three-storey flat-roofed blocks, mostly in individual rooms in place of the predecessor’s dormitories.

The Salvation Army Housing Association wholly replaced this building in 2005–7 for supported housing (109 beds), eighteen bedsits and a disabled unit in four-storey blocks with polychrome brick facing. Designed in 2003 by Swanke Hayden Connell Architects, this project was seen through by Darren Bland, architect. Still called Hopetown, the premises continued as what the Salvation Army refers to as a Lifehouse for homeless women up to the end of 2017. The women were then displaced to make space for men following the closure of the Salvation Army’s Booth House (see p.xx). The building was renamed Founder’s House to downplay the association with women.1

A visit to Mena's flat
Contributed by Rosemarie Wayland (nee Zetolofsky) on June 6, 2017

When I was still in primary school we had our first Asian child join the class, her name was Mena and she lived in the tenement houses in Old Montague Street. She lived at the very top and she was the only member of the family that spoke English. She invited me back one day to her flat and we walked up the tenement stairs. All I could smell was the spices and all these wonderful aromas. There was a big double brass bed and they had boxes under the bed - all their worldly goods. The kitchen was partitioned off with a curtain. The bathroom and the toilet were down one flight. The mother welcomed me and, because she didn't have any English food as such, she'd bought a packet of Jacob's Cream Crackers with a pot of strawberry jam especially for me. She put it on a plate and she gave it to me. I thought, 'I don't want that, I want what I can smell. Give me some of that!' but I ate the crackers and the strawberry jam.

It was opposite a kosher butcher that sold chickens on Old Montague Street. The building was a three-storey tenement block. There was a whole row of them and she lived on the very top floor. The building is now gone.

Next door to the chicken shop there was a greengrocers. It was a brother and sister that owned it and they lived above the shop. If my mother ran out of vegetables she would send me round there to knock on the side door and say 'Mum's run out of potatoes, or vegetables…Can she have some?' The shopkeeper would go into the shop and then give some produce to me and I would run home.

This slide, below, from the Tower Hamlets Archives collection, shows the south side of Old Montague Street lin 1971 looking westwards across the fronts of Nos 66-70 and the entrance to Black Lion Yard towards the tower block of Denning Point on Commercial Street in the distance. All the buildings in the foreground have been demolished. 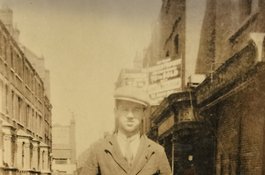 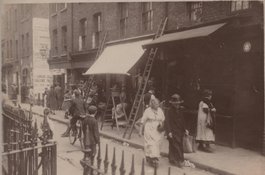