102 Whitechapel Road
Back to Map

1852, house with cafe and warehouse, later a boarding house, now shop and flats

My Italian great-grandparents Filomena and Antonio Fusco ran a café and boarding house at 102 Whitechapel Road, from about 1909-10, but they were definitely there in 1911 when the census records them as having six children, one servant (Abe Goldberg) and 36 boarders - a total of 45 people all living in 10 rooms! The boarders' ages ranged from 19 to 57, most were born in the East End, with a smattering from further afield - Scotland, Ireland and one from Austria. Most were occupied in low-paid unskilled work - hawkers, a tinker, a costermonger, general labourers - but there was a clerk, and a couple of tailors, which, like the fish curer and dock labourer also boarding there, is indicative of local employment. More unusual occupations included a coffin repairer and a farmhand. Antonio and Filomena ran this establishment until 1928 and at some point within the next three years the family moved to Fulham.  My research has also unearthed details of former and subsequent businesses at this address as follows:

102 Whitechapel Road
Contributed by Survey of London on April 19, 2018

Here at the north-west corner of what had been the Turner estate, a small house set back behind a shop was rebuilt in 1852 by and for William Miller, who had coffee rooms next door on the site of No. 104. A three-storey warehouse went up to the rear on Vine Court. Coffee rooms to the front were maintained, and the warehouse had been adapted to be a boarding house by 1890. Filomena and Antonio Fusco ran the café and boarding house from about 1909 to 1928. In 1930 the back building was adapted to be tailoring workrooms, demolished in the 1960s. The four-storey front block has had its brick façade rendered white. The shop now houses the Al-furqan bookshop.1 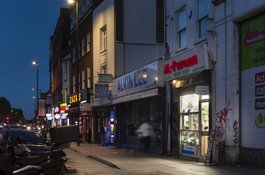 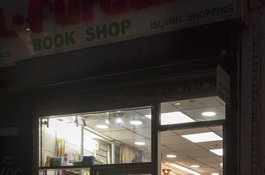