75 Whitechapel High Street
Back to Map

75 Whitechapel High Street and site of Bull Court
Contributed by Survey of London on July 5, 2018

Although much repaired and extended, this substantial four-storey building is one of the few on the High Street that may retain eighteenth-century fabric – or possibly earlier, judging by red bricks, possibly reused, evident in the party walls.1 It is three windows wide, with a double-pitch M-roof.

The site’s early history is uncertain, though it is likely to have been part of the ground between Angel Alley and what became Osborn Street occupied by the brewers James Enyon and Samuel Cranmer in the late sixteenth and early seventeenth centuries.2 By 1673 one Richard Bowler was in occupation of the High Street site, and by 1711 Joseph Bowler, a wealthy cordwainer and presumably a relative, left the house, along with other property on the south side of the High Street that had previously formed part of Enyon/Cranmer’s land.3 By 1735, when the house was conveyed along with those on the sites of Nos 74 and 76 by Henry Hall, grocer, to John Stone, a Covent Garden apothecary, it was divided into two parts, but described as ‘formerly known by the sign of the King’s Head’, suggesting earlier use as an inn.4 From 1753 it had reverted to single use, as a distillery owned by James Read (d. 1765) and his son William (d. 1809), who in 1763 married into the prosperous Rex family of Whitechapel distillers, by which connection he was able to remortgage his Whitechapel property and forswear distilling.5 The house ceased to be a distillery by 1781, and was occupied first by William Hale Demeza, stationer and constitutional reformer (1781-7), subsequent use being by a tea dealer and grocer, John Nightingale, who moved to No. 84 c. 1806, succeeded by Bligh, ironmongers, who were there when the premises were damaged by the fire that destroyed No. 74 and who remained till the 1830s.6

Thereafter it became successively a carpet warehouse, a grocers, and outfitters. In the 1880s the London School Board had a committee room in the building.7

Another fire in 1890, when it was occupied by the outfitter Philip Moses who then moved to No. 83, brought substantial repairs.8 After a brief interlude under another outfitter, the local Liberal politician Robert Rycroft (recently ousted from No. 79 which was demolished in 1890 for Whitechapel Library), had the shop (‘Ladies of Whitechapel say that Rycroft’s is the best place in London to buy corsets – they wear well, fit well, look well, and sell well’), followed from 1894 till c. 1935 by a branch of the outfitters Dunn & Co., founded from 1887 by the Quaker G.A. Dunn.9  It was then run as an amusement arcade until the 1950s, when it was used as premises for wholesalers of textiles and fancy goods, and the back of the building extended and reconstructed c. 1972.10 Since c. 2002 it has been a shop and storage for Audiotime (UK) Ltd, a wholesaler and retailer of electrical goods and homewares, established in 1972 by Iqbal Mahmood Shahid, and previously at 69 Whitechapel High Street, opposite.11

From at latest the mid-seventeenth century what is now No. 75 High Street has included a narrow entryway at its left side to Bull Alley, later Bull Court.12  In the seventeenth century the alley was lined with twenty small houses of between one and three hearths (of those recorded), but it was truncated in the early eighteenth century by the development of the Swan brewery and the creation of an entrance to its yard from what is now Osborn Street, and by 1761 had only around ten houses.13. All but one of the remaining houses on the east side of Bull Court were pulled down some time in the early nineteenth century but the west side survived as four small houses for another half century. Occupants in 1841 included several weavers, a carman, a cooper, a tailor, a seamstress, a costermonger and a corn doctor (chiropodist). By 1851 only one house was inhabited, that by a carpenter, by 1861 it was unoccupied, by 1871 it was found that ‘Bull Court no longer stands’, and in 1881 Bull Court is said to be ‘closed up’.14  However, by 1891 a range of lodgings on the west side, 1, 2, 3 and 4 Bull Court, apparently accessed from Osborn Street, was occupied by fifteen single men, mostly labourers, though there is no sign of occupation by 1911 and in 1914 ‘1 to 4 Bull Court are pulled down and the land is unoccupied’.15

Robert Rycroft the draper
Contributed by RMH on Nov. 30, 2020

Robert Rycroft moved south from his Lincolnshire birthplace to be an errand boy at his uncle’s drapery business in Colnbrook. He then moved to 141 Whitechapel High Street as an apprentice draper before setting up in business himself at St. Pancras and getting married. Later he moved back to Whitechapel High Street to No. 79. before being forced to move to No. 75. While Robert Rycroft was in business at No. 75 he not only ran his drapery business but was also prominent in local affairs. In May 1887 he petitioned the Queen on behalf of the Whitechapel traders. She had been invited by the committee of the East London Palace to open the Queen’s Hall. The invitation was evidently for a Saturday and the petition was to ask the Queen to vary the day. Saturday was market day, and the traders did not want to have to close their businesses for the Queen’s visit on their most important trading day on which they derived the bulk of their weekly income.

The affair of Jack the Ripper must have had a devastating effect on the residents and Robert’s name tops the list of petitioners who asked the Home Office in October 1888 to improve policing in Whitechapel, a petition which led to the resignation of Sir Charles Warren as Commissioner of the Metropolitan Police in November 1888.

The exploits of Jack the Ripper led to criticism of the street lighting in Whitechapel and in December 1888 Robert was made Chairman of the newly formed Lighting Committee of the Whitechapel Board of Works, tasked with improving the lighting.

His time at No. 75 ended rather sadly: in 1892 his youngest daughter, Gertrude, died at the age of ten from peritonitis and in September 1893 his wife died of phthisis (tuberculosis). He abandoned the business shortly afterwards and moved to Ilford where he became a member of the Council and a civil servant. 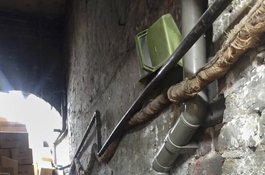 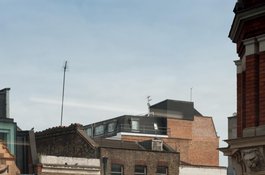 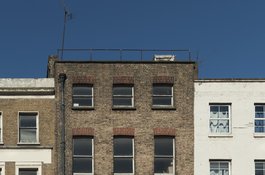 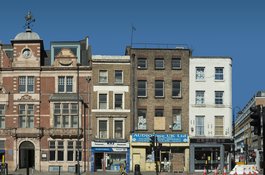