Travelodge London City
Back to Map

Travelodge London City
Contributed by Survey of London on June 5, 2019

This ‘flagship’ hotel of the Travelodge Group opened in 2018 on, essentially, the site of the sixteenth-century Boar’s Head playhouse and all the buildings that succeeded it. It sits immediately to the south of the service road that served the market-stall storage and car park beneath Cromlech House, and also occupies the full width of the site between Middlesex Street and Goulston Street. The owners of the site are Cromlech Property Company Ltd, part of Daejan Holdings, previously the Freshwater Group. The first application for this site and the rest of the site to the south up to Whitechapel High Street, was in 2005, for a seventeen-storey fully glazed office building, to the south and eight-storey hotel to the rear, both to the designs of John Seifert Architects. Planning permission was given in 2008 but with recession work did not start and was superseded by a further application approved in 2013 to build only the hotel, to the designs of If Architecture, whose director previously worked at John Seifert.1

The revised design built in 2016-17 is of six storeys at its north end rising swiftly to eight on the rest of the building, the top two set back on the west side. The frontages up to the sixth floor are stone clad, with the seventh and eighth and the central portion of the south side clad in darker brown shades of terracotta. Windows on the south side are shallow triangular oriels, one face terracotta projecting beyond the other, which is glazed, alternating on each floor, to prevent overlooking and restricting development in the site to the south. The hotel has 395 rooms and a ground-floor café/bar. The main contractors were Tolent Construction Ltd.2

Cromlech House and United Standard House
Contributed by Survey of London on June 5, 2019

The site of the Travelodge London City was cleared after the Second World War of the bomb-damaged portion of Brunswick Buildings, Goulston Street, the 1880s warehouses at 16 to 36 Middlesex Street, a single very large warehouse at 8 to 14 built in 1886-7 for Hollington Bros, wholesale clothiers, and 140 to 145 Whitechapel High Street, cleared later and rebuilt with single-storey shops demolished c1990.1 The site behind the High Street was in use as a car park by 1947, and by market stalls on Sundays. The first rebuilding was a solitary four-storey showroom and workshop building at 16-20 Middlesex Street in 1954-5.

Shortly after the war Petticoat Lane Rentals had taken a lease of the cleared site between Goulston Street and Middlesex Street as a car park and as a site for market stalls on a Sunday. By 1952 the site was scheduled under the Stepney comprehensive development plan for a warehouse and office building, but it was not until 1961 that the developer City and Country Properties Ltd secured outline planning. The scheme, designed by G. A. Crockett, architect, was for a double-height sunken market hall with gallery at street level for more stalls, in plan fanned out towards the north end, with a delicate Festival of Britain diamond-patterned glass roof. To the south was a tower of offices in a similar style, with a zig-zag profile roof of concrete shell with two double-pitches and oversailing up-pitched eaves. It had seventeen storeys of offices above first-floor restaurant and ground-floor shops, all curtain glazed around a lift core. On the Middlesex Street frontage of the market hall was a three-storey curtain-glazed building with showrooms on its upper levels. To the south of the tower was to be a sunken garden and access to basement parking, with a loading bay on the Goulston Street side of the market hall.2 A revised scheme received planning permission for the new owner, Cromlech Property Company Ltd, and construction began in 1964, when the 80-year covenant imposed by the Metropolitan Board of Works when they sold the Goulston Street frontage on which James Hartnoll built Brunswick Buildings restricting the site to flats for the ‘industrial classes’ expired.

The conjoined buildings that went up – United Standard House to the south and Cromlech House to the north - to the designs of J. Ockell of R. Seifert and Partners, architects, was more typical of the 1960s than Crockett’s more elegant design of 1961. The office portion, United Standard House, was in a slab block, six storeys over a three-storey and four-storey podium covering the entire site (leaving a light well behind the 1955 building at 16 to 22 Middlesex Street), faced in yellow brick like the side of the slab block, with continuous high-level strip glazing. The ground floor was mostly open beneath the podium, space for car parking and market-stall storage, the exception being the base of the tower.

The tower’s principal tenant was United Standard Insurance Co. Ltd, and with other insurance companies and, in the 1960s and 1970s, shipping agents predominating, reflecting Whitechapel’s status at the period as ‘the centre of the commercial marine business in Britain’.3 Cromlech House was more typical of commercial Whitechapel, with Daylin shirt manufacturers in the 1960s and 1970s, L. Frankenberg, warehousemen - who sold their Houndsditch headquarters in 1971 and moved to Cromlech House - and in the final days, Pemberman’s caterers.4

Petticoat Lane Rentals were wound up in 2008 and United Standard and Cromlech Houses were empty for 10 years pending redevelopment, which was completed in two phases, starting at the north end with Cromlech House, site of the Travelodge.5 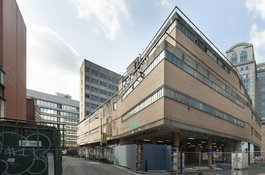 Cromlech House from the northeast in 2016
Contributed by Derek Kendall 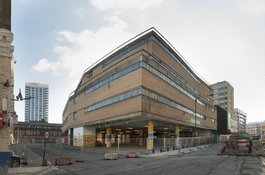 Cromlech House from the northwest in 2016
Contributed by Derek Kendall 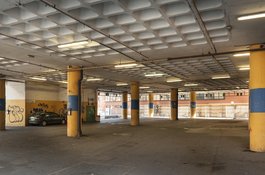 Inside the parking and market-stall storage area of Cromlech House, 2016
Contributed by Derek Kendall