From Graces Alley to Cable Street
Contributed by Survey of London on Dec. 7, 2018

The alley from the north-west corner of Marine Square was first called Boat Alley in 1683. Felix Calverd, a brewer, tax farmer and Fire Office trustee associate of Nicholas Barbon (who undertook the development of Wellclose Square), was then assigned the superior interest of the frontages. Leases were given to Francis Hooper for the east end of the north side, Charles Armistead, west end of the north side, and William Blackwell, south side. Building work was doubtless slow to get underway, but in early 1694 Calverd was taxed for eight empty houses at Well Close. George Jackson, a City bricklayer, built at least two 14ft-frontage houses on the alley’s south side in 1694–5 under a lease from Calverd to Edward Wright, a Clerkenwell glazier.1

By 1720, with its frontages fully built up with ten houses on each side, Boat Alley had come to be known as Graces Alley, a reference to the former abbey of St Mary Grace that had stood on the site later occupied by the Royal Mint. Next to Wellclose Square on the north side at 1 Graces Alley was the George Prince of Denmark’s Head, or Prince of Denmark public house, the name a nod to the square’s Danish church and occupancy – Prince George of Denmark and Norway, Queen Anne’s husband, died in 1708. This pub was part of Hooper’s block of ten houses which passed to Benjamin Collyer, a Surrey merchant. In 1732 John Harper, a citizen needlemaker, was given a new lease of the whole row on the north side of Graces Alley to run to 1805. Soon thereafter Collyer was obliged to sell and by the 1770s part of a larger property, which also included fifteen houses along the south side of Cable Street, was divided in the ownerships of Edmund Probyn, William Coward and the Duke of Bridgewater. Leases were co-ordinated to fall in together in 1805.2

John Yarrem, a silversmith and hardware dealer or toyman, was at 4 Graces Alley by 1760. In the years around 1800, Benjamin Abrahams, a slop (clothing) seller, was at No. 2 and George Holding, a confectioner at No. 3. In December 1807 Probyn, the Earl of Bridgewater and Ann Jemima Wroughton issued new leases for the unusual term of 46 years; it is not clear that rebuilding was expected. William Marsh, a publican, took 1–2 Graces Alley, the former continuing as the Prince of Denmark. Holding and Yarrem’s son, also John, continued respectively at Nos 3 and 4, which appear both, like the alley’s other houses, to have been two full rooms deep at this juncture.3

Shop use was general along both sides of the alley through the nineteenth century. After many years as an empty site, 7–8 Graces Alley were rebuilt in 1897–8. The American Stores beer house was at No. 10 in the decades either side of 1900, and the Royal Standard public house was at the west end of the south side, on the Well (Ensign) Street corner.4

Up to the 1960s the stretch of Cable Street immediately north between Well Street and Fletcher Street had a row of around twenty early- and mid- nineteenth-century three-storey shophouses, which included the Bricklayers’ Arms at No. 26, and the Admiral Blakeney’s Head at No. 56 on the Fletcher Street corner. When general clearance of Graces Alley and both sides of this stretch of Cable Street was programmed in the early 1960s, the houses on the south side of the alley had already been demolished. Particular complaints were made about an unlicensed club at 7–8 Graces Alley, owned by George Gavrilides and frequented by ‘coloured men’. Clearance of all but 1–4 Graces Alley and what had been Wilton’s Music Hall ensued by 1968.5

Sapphire Court
Contributed by Survey of London on Dec. 7, 2018

The site to the west and north of Wilton’s Music Hall, empty since the 1960s, was sold off by the London Residuary Body in the late 1980s. A 1994 proposal for a multi-storey car park (Skypark) was seen off and the site was built up in 1997–9 with two- and three-storey stock-brick faced ranges fronting Cable Street, Ensign Street and Graces Alley for thirty flats and maisonettes. A weak Neo-Georgian treatment extends to rusticated rendering.1

Memories of shopping in war-time Cable Street
Contributed by eric on Nov. 1, 2016

My mum did the ‘weekly’ shop in Cable Street, where we used a greengrocers and a Yiddisher grocers. I went too, most times.

The grocer sold you your needs, wrapped in paper or put straight into your bags, and he tallied the costs on a simple square of torn-off paper. He would verbalise the total cost as he summed it. But, he could not pronounce the ‘th’ of ’three’, and so verbalised it as ‘tree’. Strange things stick with youngsters, and my mind wants to say ‘tree’ instead of ‘three’ even today.

We were in the grocers one day when its owner was serving a lady. She bought some eggs, and as usual these were handed over flimsily wrapped, and she dropped one. Without hesitating, she scooped the egg, still mostly in its shell, and poured it down her throat. Such were the shortages of war. I remember this because I have always been a bit iffy about fatty/slimey things in the mouth.

At another time, during a weekday, I walked past another shop with an open door, and the way through to the back yard was visible. In the yard was a cow, which moo’d at me.

A cow in Cable Street? Wow. That is a memory. 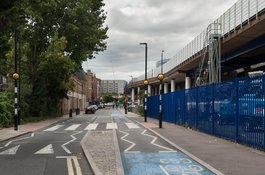 View along Cable Street from the east (Sapphire Court to left), 2017
Contributed by Derek Kendall 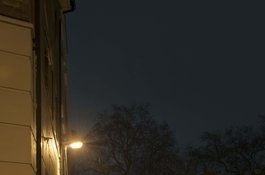 North side of Cable Street in the 1960s

This silent offcut of film from the 1960s is a long tracking shot taken from a vehicle from opposite 18-34 Noble Court (on the south side) in Stepney to the south end of Leman Street. The area opposite Sapphire Court is from 0.59 to around 1.15 on the timer. The footage is remarkable for the fact that every last brick in the film, we believe, has gone, the sites all now used as parking beneath or south of the Docklands Light Railway.