18 Ensign Street
Back to Map

The Mercantile Marine Act of 1850 introduced regulations to improve conditions and discipline in the merchant navy, formalising some of the anti-crimping arrangements introduced by the Sailors’ Home. Mercantile marine offices were set up in ports and run by the Board of Trade to register the engagement and discharge of crews and for the examination of masters and mates. One such office was immediately established in the Well Street Home, moving to the ground floor of the new Dock Street building in 1865. This became controversial in 1868 when an adjacent clothing store was established, to protect sailors from ‘slop’ transactions. Independent clothiers felt undermined by the seemingly official nature of this competition. Clothing sales in the Home were thus moved to a back yard in 1871 and the Mercantile Marine Office moved out in 1872 to be amalgamated with another office that had been near America Circus in a new building at St Katharine’s Docks.1

Facing lease renewal and dis-satisfied with the premises in the docks, the Board of Trade approached the Sailors’ Home in 1892 about a return of a Mercantile Marine Office. A 50-year lease of the south wing of the 1830s building and the Home’s stable yard further south was agreed, the Home undertaking to redevelop. The Home’s architect, John Hudson, now working as a partner in Wigg, Oliver and Hudson, prepared plans for premises to accommodate the engaging and discharging of crews and the examinations of masters and mates that were overseen by the Local Marine Board, which was also to be given a meeting room. Walter G. Gladding was the builder for the suitably mercantile classical three-storey and basement building that went up in 1893–4. Its ground-floor front is distinguished by polished granite, for Doric pilasters supporting a continuous fascia and flanking four entrances to separate the distinct uses. The red-brick faced upper storeys have stone cornices and cement-rendered Ionic pilasters and half columns with first-floor Serliana in an elevation the asymmetry of which is somewhat disguised by the busy-ness of its embellishment. The basement was a waiting room for the seamen, and the ground-floor spaces were used for their engagement and discharge. The first floor housed the Local Marine Board’s and other offices, the second floor the examination room, and space above was used to store deceased seamen’s effects. There was a hydraulic lift. White-glazed brick to the rear, butting up to St Paul’s Church, was used at the insistence of the Rev. Dan Greatorex.2 An ARP shelter was formed in the basement in 1939.3

Joseph Havelock Wilson, founder of the National Sailors’ and Firemen’s Union (renamed the National Union of Seamen in 1926) had set up an office in Wellclose Square before 1900. This moved to the east side of Ensign Street directly opposite the Mercantile Marine Offices in the 1930s, spreading from No. 15 to Nos 11–17, all cleared in the 1960s. The Department of Trade and Industry was still using No. 18 for signing–on crew and other purposes into the 1980s. Conversions for studios, flats and offices followed from 1985 to 1998. Open City, organizers of the Open House London annual festival of architecture, was based in the building from 2013 to 2020.4

On the 1790s edition of Horwood's map of London, 'Maud's Sugar House' is named, abutting the Royalty Theatre in Well St (the old name for Ensign Street).1 Initially with Wackerbarth, later with Crook, Mr Maud ran the refinery from about 1789 to 1803.2 We can see the sugarhouse in an image of the theatre by Daniel Havell.3

The later edition of Horwood's map dated 1819 shows the sugarhouse had been demolished and the site empty.5 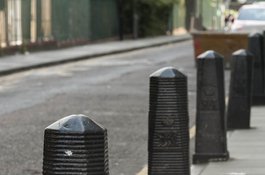 Bollards on Ensign Street marking the site of the Royal Brunswick Theatre, in 2017
Contributed by Derek Kendall 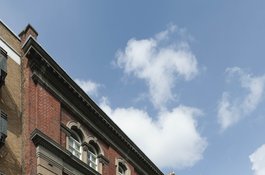 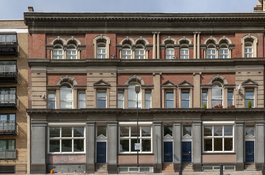 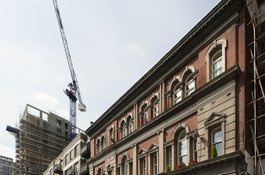 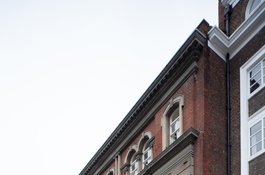 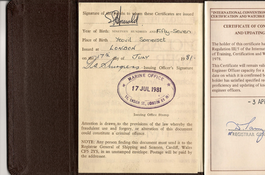