These details show the buildings soon after the premises at 2 Osborn St had ceased production in 1875. The development of the site for sugar refining began in late 1795 when Robert Dewes and George Ansell acquired the lease to 4 Whitechapel Rd. Early in 1796 they leased the land behind it that opened onto Osborn St to the west and abutted south on other ground of Daniel Peacock and Isaac Smith, east on Nags Head Inn, and north on the court house of the Court of Requests. In 1806 they took additional partners, and the site was referred to as 'messuage, sugar houses and ground on east side of Osborn St'. The partnership was dissolved in 1821 with the business continued by the Dewes family until Robert Dewes's death in 1832, when George Bankes took over the premises. Charles R. Dames and John F. Bowman leased the refinery from the Bankes family after George's death in 1843. Richard Dames replaced Bowman in 1855. Dames senior died in 1861 and Richard continued the business until, like other refineries, it ceased to make money. It was put up for sale in 1875 and Dames finally surrendered the lease back to the Bankes family in 1877.2

What had previously been the narrow southern end of Brick Lane took its present form and the name Osborn Street (after local landowners) following legislation in 1778 that provided for the widening and paving of ‘Dirty Lane’. Commissioners were granted compulsory purchase powers over Thomas Berney Bramston’s property on the street’s east side for clearance, including of the Bell after which Bell Yard was named. Other paving improvements, including to Old Montague Street, were enabled by the same Act. The roadworks were carried out in the 1780s.1

The new frontage was not yet fully built up when a tall sugarhouse was built on the site of Nos 12–18 in 1794–5 by Robert Dewes and George Ansell, sugar refiners previously in Goodmans Fields (see Bryan Mawer's account). Bramston granted them a 70-year lease of a site with an 85ft6in. frontage and a depth of 96ft8in., curtailed to the south-east where it abutted the yard of the Nag’s Head Inn. There were two houses, a sugarhouse and a warehouse. By 1806 Dewes and Ansell had acquired the freehold. George Bankes took over in 1832 and saw the sugarhouse destroyed by fire in 1834. After his death in 1843 Charles Richard Dames and John Frederick Bowman ran what was now described as a steam sugar house, ownership of the property and business passing to Dames & Son (Richard Dames) in 1850 up to 1877. By the time of the refinery’s closure in 1875, it had grown to have a frontage of 135ft. The sugarhouse had nine floors, there was internal iron construction and a 150ft chimney.2

From 1878 the Victoria Wine Company had the former sugarhouse buildings at Nos 14–18, adapted to be its head office, warehouses and vaults. This firm, started in 1865 by William Winch Hughes in Mark Lane in the City, is said to have been the first wine multiple in Britain. Making the most of reduced duties on French wines, Hughes’s operations expanded quickly and there were 63 shops by 1879. The Osborn Street site’s substantial buildings were used for the storage and bottling of all kinds of alcoholic drink, and tea was also handled. The ground floor housed offices and retailing. Replacement was piecemeal. A four-storey warehouse was built (at Nos 16-18) in 1892, and there were further extensive rebuildings at Nos 12–18 to a height of seven storeys between 1916 and 1926. An air-raid shelter was installed in the basement in 1939. The depot was a casualty of bombing in May 1941 when five members of staff were killed.3

The whole site (12–20 Osborn Street) was redeveloped in 1957–61 as a clothing factory, a warehouse and workshops, with offices above and shops below. Within a year or so a day nursery for the children of the factory’s employees was built to the rear, behind the Nag’s Head public house. This was converted to storage use in the late 1970s and demolished not long after. It has been succeeded by a building of comparable scale at the south end of a car park entered off Old Montague Street.

The factory was converted to be a hotel in 2000–1 for M. Gill of Transomas Properties, and raised _c._2004 to plans by GA Architects. Further alteration of what had been City Hotel in 2015–16 gave the ground floor its ‘graffiti- proof’ granite facing, for a bar that has since become a franchise restaurant under what was renamed Arbor City Hotel. Remodelling with substantial extension to the rear on the former car park up to Old Montague Street began in 2021. This aims to provide 153 further guest rooms in blocks rising to six storeys designed by Dexter Moren Associates, architects.4

Spotting Lulu in Osborn Street
Contributed by Joe_Waterman on Oct. 31, 2018

I worked in Osborn Street in 1963 before emigrating to Los Angeles. I was a pattern cutter and grader for a garment company called Mary Harnes. Opposite the company I worked for I think was a recording studio. I saw a very young Lulu get out of a cab and go into the building opposite. 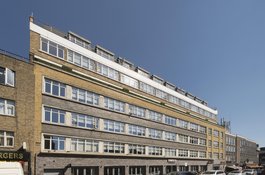 12-20 Osborn Street, from the north-west in April 2017
Contributed by Derek Kendall