23 Prescot Street
Back to Map

The Magdalen Hospital’s premises were advertised in July 1772 with a fifty- year building lease. This sale evidently failed as several houses with large gardens were again being promoted for redevelopment in June 1778. The hospital estate had been combined with adjoining property to the east, the three westernmost houses that Thomas Quarrill had built in the 1740s with leases that ran to 1777–8; William Quarrill vacated the end house after 1775. In 1778–81 a uniform terrace of nine large houses went up, with Magdalen Passage formed to the east as a way through to Chamber Street. It came to be known as Magdalen Buildings or Magdalen Row (16–24 Prescot Street from 1869). The builder of Nos 4 and 7–9 (Nos 19 and 22–24) was Thomas Tourll, a Limehouse timber merchant, who in January 1779 abandoned unfinished carcasses having fallen bankrupt. Other builders remain unknown. Nos 5 and 6 (Nos 20–21) had been completed and offered with sixty-year leases. The houses, possibly all now complete, were entirely empty in 1781. This appears to have been too high- quality a speculation for its location. On plain three-bay four-storey and basement stock-brick fronts there were pedimented Doric doorcases, a surprisingly old-fashioned plat band to the first floor, and blind central windows in the top storey on account of centre-valley or butterfly roofs. X-pattern iron railings, misleadingly called chevaux de frise, secured the forecourts. Inside, each house had three parlours, a dining room, eight bedrooms, two kitchens, and wine and coal vaults, with coach-houses and stables to the rear for Nos 5–8 (Nos 20–23) on what became Yeoman’s Yard off Chamber Street.1

Takers were found, and six of the houses were occupied by 1783, including by Abraham Goldsmid (_c._1756–1810) at No. 2 (No. 17), moving here from the family home on Leman Street. It was 1791 before all were occupied, many early residents being merchants. The first occupant in No. 8 (No. 23) by 1783 was James Fisher, an attorney, followed in 1788 by William Lafosse, who was or had been Fisher’s partner, then from 1791 by Benjamin Nind, another attorney and Secretary of the Middlesex Dispensary, whose lease was held by John Harris (see below). Nind stayed resident here until about 1823. Abraham Abrahams, a watchmaker, followed until at least 1830 when the property was also premises for Milligen & Co., wholesale jewellers. Henry Trinder, a dealer in glass objects, took the house on and then in the 1840s Ann Pool, a widow, made it a lodging house.2

In 1838 the executors of Giles Crompe, a Clothworker, sold the freehold of all nine Magdalen Row houses with four more on Chamber Street. They were advertised as having ‘excellent counting houses, show rooms and other buildings … particularly adapted to professional men or merchants’, but by this time Prescot Street was losing appeal for gentlemanly traders.3

No. 8 (No. 23) was leased around mid-century by Samuel Elias Moss, a Houndsditch-based wholesale jeweller trading as Moss and Levetus. He lived here with three Irish servants and twelve relatives, including his sister Marian, a governess married to Alphonse Hartog, a professor of languages from France. Abraham Levy, an elderly gentleman, moved here from 48 Prescot Street with his servant. Then Salomon Pool, a Dutch-born cattle salesman, made No. 23 his home in the late 1860s. English Martyrs’ Roman Catholic Church briefly had the house for a presbytery around1880. Moses Goldstein, a Polish cap maker, followed and it was probably during his tenure that the garden was built over with a workshop that was used around 1900 by Harris Braidman & Co., boot- makers. Tailoring followed in the first decades of the twentieth century. H. Frost Ltd, plumbers and builders, were based at No. 23 from after the Second World War to around 1986 when the building had to be shored up. Repair and conversion back to residential use ensued with a rear extension replacing the former workshop. The building was in fact thereafter used as offices, being reconverted back to be a house in 1996.4

No. 23 is the only house from Magdalen Row to survive. Nos 17–19 (formerly Nos 2–4) stood largely unaltered until they came to be owned by the CWS from at least the 1930s. Arthur Crow, Whitechapel’s District Surveyor, and John Robert Smith, an architect, were based at No. 18 from around 1894 to 1904. The Sisters of the Immaculate Conception moved their convent to No. 17 from about 1904 to 1928. The Women’s Co-operative Guild leased No. 17 from the CWS for its headquarters from 1936 until 1940, and during 1939 it was also the address of the No Conscription League, whose Honorary Secretary was the former Labour Co-operative MP, James Hindle Hudson. The row was damaged in a raid in 1940. The site of Nos 20–22 was developed in 1953 with a three-storey brick-faced office building for the Shipping Federation, from where seamen signed on to ships via the Merchant Navy Reserve Pool. The ruinous houses at 17–19 Prescot Street had been cleared by the 1960s and the CWS pushed for office use of the site on a planning-gain basis. No. 16 survived till about 1984 when office development was permitted.5 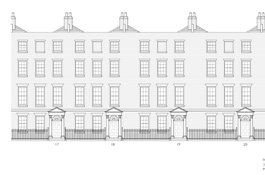 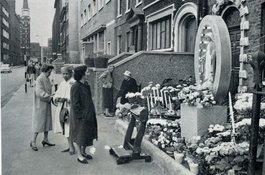