29 Whitechapel Road
Back to Map

1891, built by and for Mark Levy as tailoring premises above and behind a draper's shop

29 Whitechapel Road
Contributed by Survey of London on March 29, 2017

No. 29 Whitechapel Road was built with a workshop to the rear in 1891 after a recently erected predecessor was destroyed by fire. It was put up by and for Mark Levy of Fulham and occupied as a draper’s shop with tailoring on the upper storeys and ladies' costume makers in a back workshop. The premises housed a Mantle Makers’ Club and a first-floor front room opened to visitors in July 1898 as the Russian Free Library and Reading Room. This was an initiative by Alexei Teplov (1852–1920), a Russian revolutionary who had been imprisoned in both Russia and France before coming to London where he linked up with members of the Society of Friends of Russian Freedom. The library moved in 1900 to 16 (White) Church Lane. Around 1905 seventy-two people were employed at No. 29. The rear workshop was raised a storey to relocate dressmaking over offices in 1931–2 for D. Silverstein, with Higgins & Thomerson as architects.1 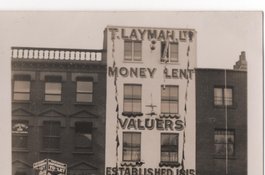