Outpatients Department
Back to Map

Former Outpatients Department for the Royal London Hospital, built in 1900–2 to designs by Rowland Plumbe.

The north-west corner of the junction between Turner Street and Stepney Way is dominated by the former Outpatients Department of the Royal London Hospital, a substantial red-brick building constructed to designs by Rowland Plumbe in 1900–2. Plans to improve the outpatients department were conceived as part of an ambitious rebuilding programme carried out under the auspices of the hospital’s chairman Sydney Holland, 2nd Viscount Knutsford, whose fundraising talents earned him the nickname, ‘Prince of Beggars’.1 By 1897 the outpatients’ department had outgrown its basement accommodation. Earlier attempts to relieve overcrowding had led to the transferral of the surgical outpatients’ unit to the Alexandra Wing in 1864–6, yet its medical counterpart had persevered in rooms in the West Wing that dated from the 1830s. These ‘cramped, dark and badly ventilated’ basements were inadequate for the volume of patients, which soared to as many as 1,000 in an afternoon.2 A number of solutions were considered, including the feasibility of enlarging the existing department. In the event, a donation from the shipbuilding magnate Alfred Yarrow secured funds towards a new building. At its completion, the medical and surgical outpatients’ departments were reunited in the largest building of its type in Britain.3 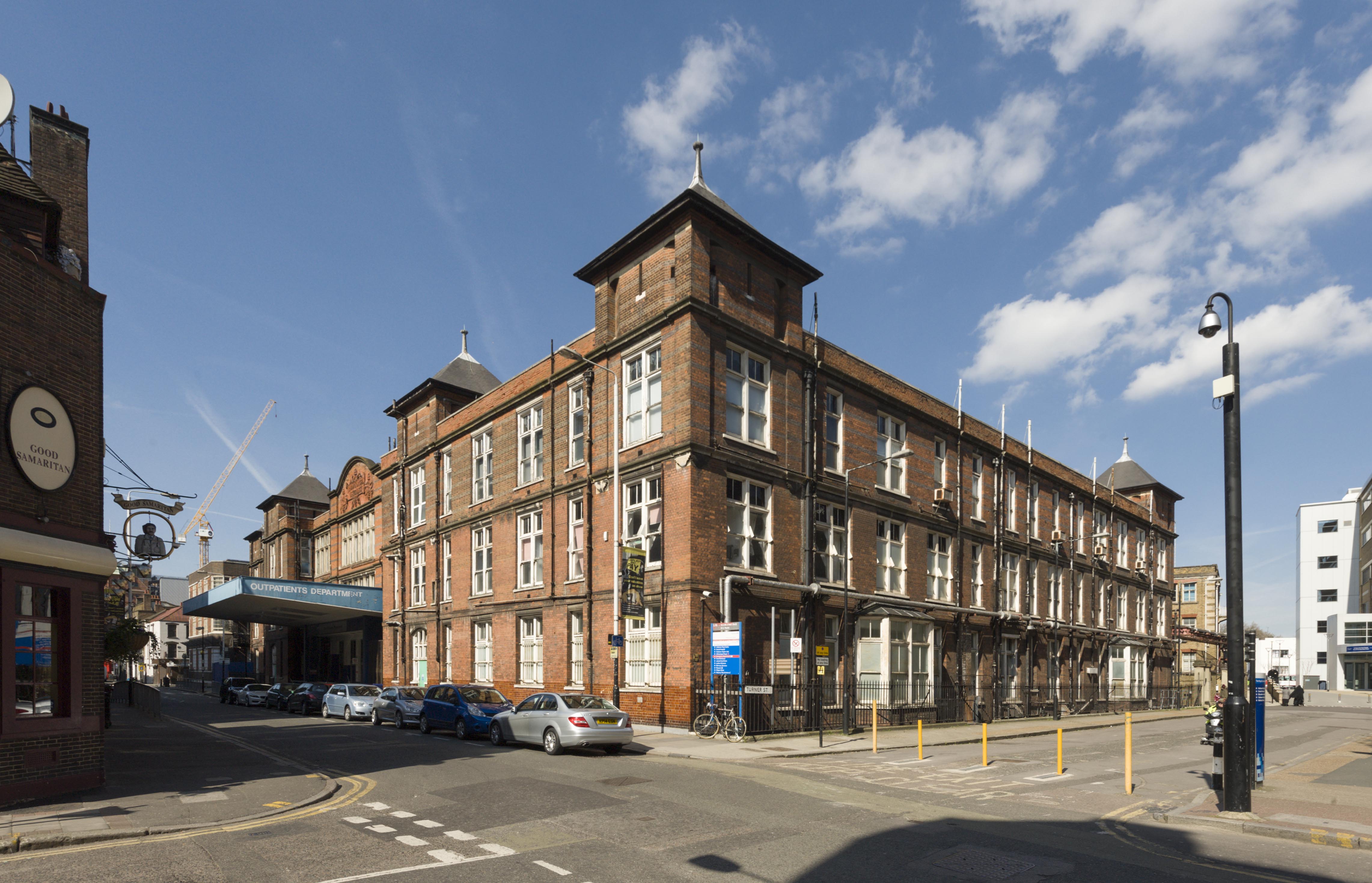 The former Outpatients Department from the south-east, photographed by Derek Kendall in 2016.

A large chunk of the hospital estate, designated ‘Block M’, was taken for the new Outpatients Department. The intended site, occupied by thirty-five early nineteenth-century terraced houses, comprised almost an acre bounded to the south by Oxford Street (now Stepney Way), Turner Street east, Green Street (later Pasteur Street) north, and a terrace overlooking New Road west.4 The complex was erected by the Bermondsey builder William Shepherd, also contracted to construct a tunnel beneath Turner Street to connect with the hospital. Early drawings indicate that it was intended to construct the building in stages, deferring the second-floor lupus, photographic and radiographic suites, yet the department was complete when patients were first admitted in December 1902. Its formal opening was reserved for a royal ceremony the following June.5

The Outpatients Department would once have appeared in stark contrast in scale and materials to neighbouring stock-brick terraced houses, though its large footprint no longer seems remarkable due to later hospital expansion. The Outpatients Department has retained its workmanlike appearance, with plain red-brick walls punctuated by large windows on each of its three main storeys. The brickwork is relieved only by artificial stone strings, narrow horizontal grey-brick bands, and a practical glazed-brick plinth. The corners of the building rise to sturdy square towers with top-floor tank rooms capped by pyramidal roofs with ball finials. The former public entrance in Stepney Way is adorned by a shaped gable with a gauged brick cartouche, now concealed above a clumsy modern canopy. The entrance is positioned between robust stair towers, with doorways designed as private entrances for the physicians and surgeons. 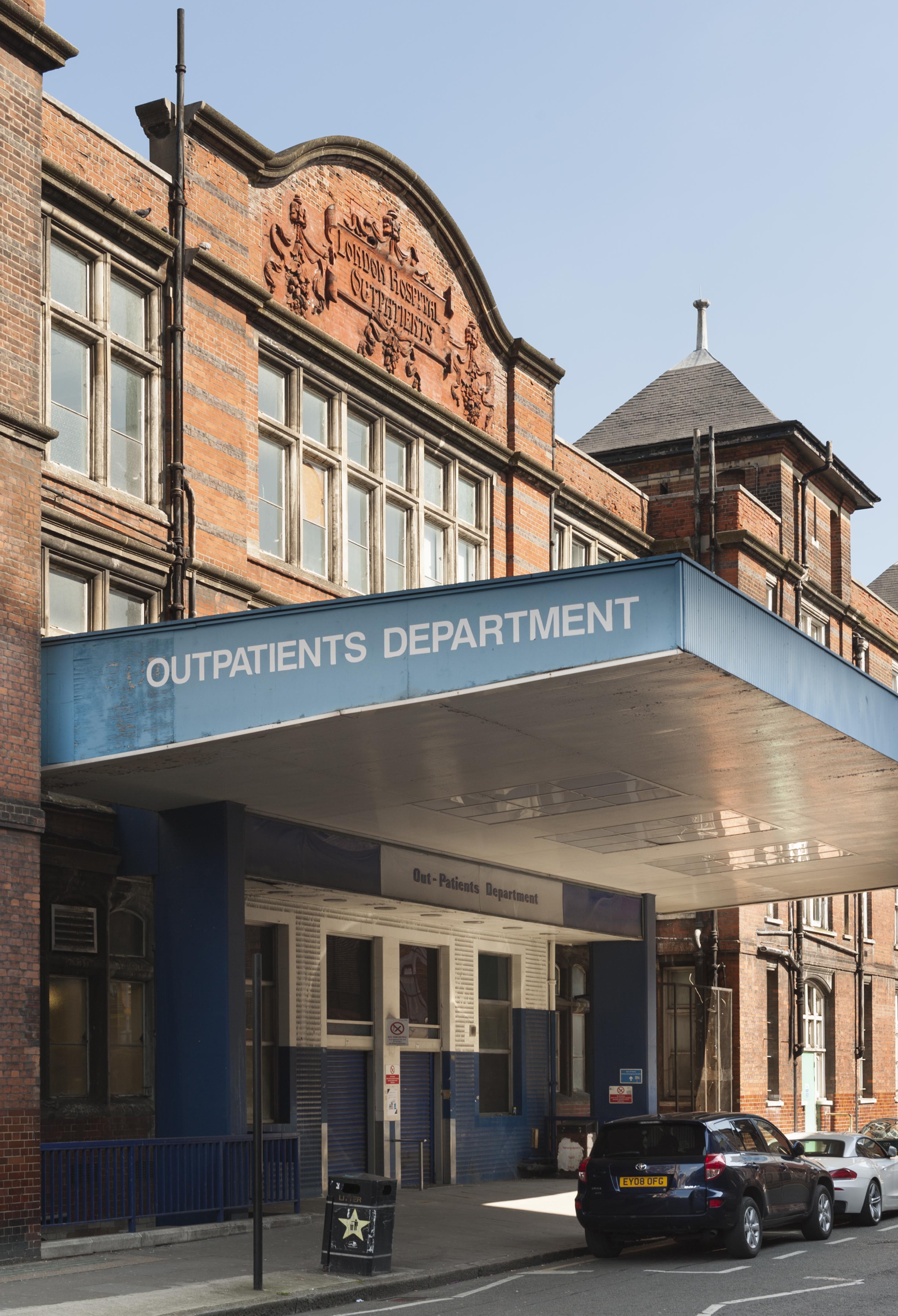 Former public entrance to the Outpatients Department in Stepney Way, photographed by Derek Kendall in 2016.

The Outpatients Department was planned with considerable ingenuity to ensure a continuous and orderly flow of patients through the building, and the separation of different types of cases. This sophisticated plan could only have been accomplished through close collaboration with the hospital’s medical and surgical staff. The public entrance opened into a vestibule that contained a registration office for new cases and ticket offices for returning, or ‘old’, patients. At the core of the building stood a vast and airy waiting hall that ascended to an open steel-framed roof crowned by a full-length lantern. It was furnished with a refreshment bar, drinking fountains, and uniform rows of benches designed to provide seating for 1,000 people. This central hall was wedged between a surgical department to the east, a medical department west, and a dispensary north. Plumbe’s utilitarian treatment extended to these internal spaces, which were lined with easily cleaned glazed walls and mosaic floors.6 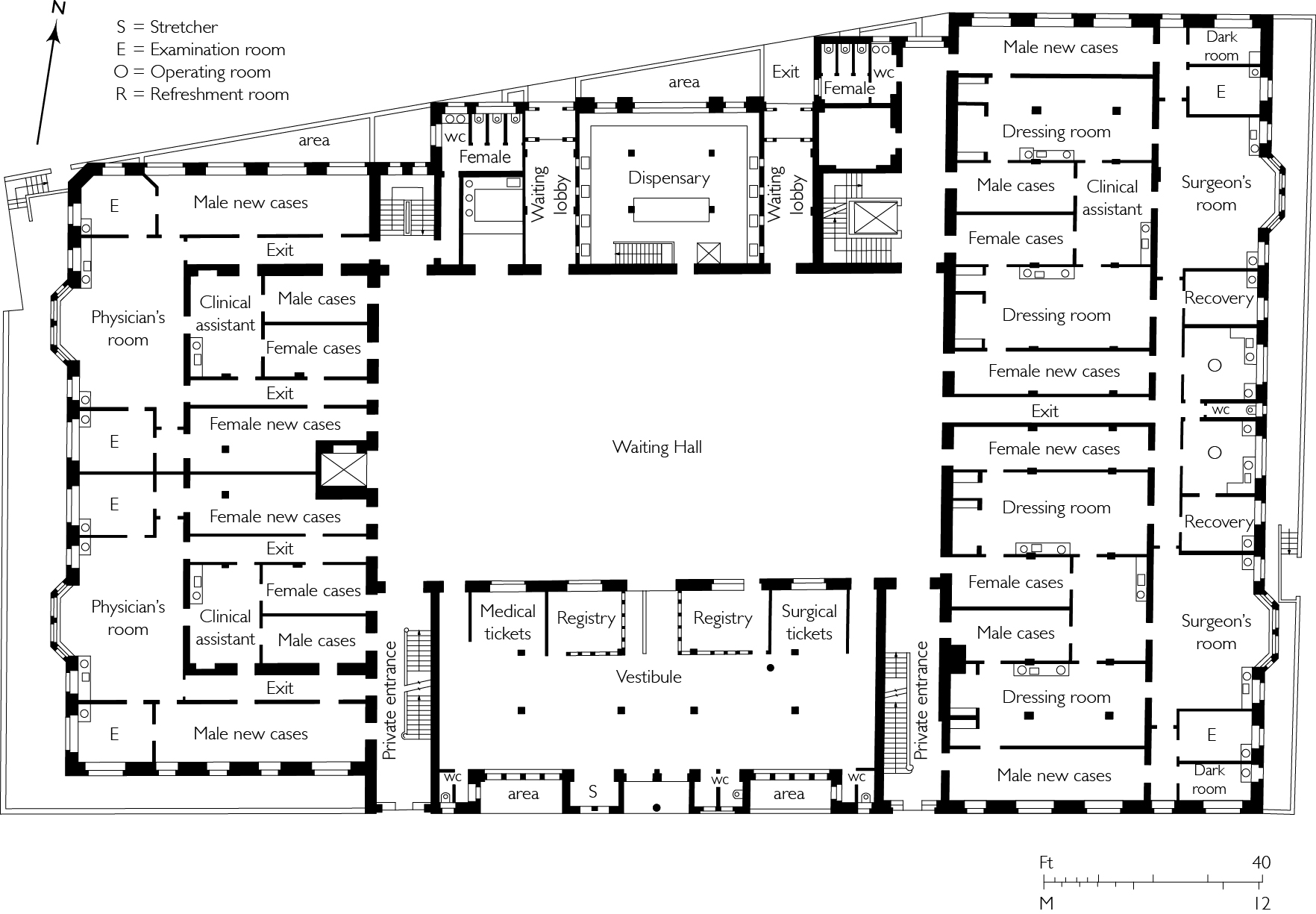 Ground plan of the Outpatients Department, redrawn by Helen Jones from a plan printed in 'The Lancet' in June 1903.

The surgical department was formed of two ‘complete suites’, each containing a surgeon’s office flanked by an operating room, a recovery room, an examining room and a dark room.7 Waiting rooms for old and new cases of both genders were accessed directly from the central hall. These narrow, top-lit rooms communicated with dressing rooms, supervised by a clinical assistant’s office. A similar arrangement was accomplished in the medical department, with two suites formed of top-lit waiting rooms for old and new cases adjacent to a clinical assistant’s office and examining rooms. The west end of each suite comprised a physician’s office lit by a large bay window.

The dispensary was flanked by two waiting lobbies, where patients would receive prescriptions before exiting to Pasteur Street. A large basement laboratory directly below the dispensary, accessed by a lift and staircase, produced medicine and drugs. In addition to this pharmaceutical laboratory, extensive store rooms, a boiler room, isolation rooms and staff rooms, the basement housed the bath department. This contained Turkish baths and medicated baths, for immersion in sulphur, mercury and carbonic solutions, along with rooms dedicated to the Tallerman treatment, a novel method of administering ‘superheated’ dry air to relieve rheumatic disorders. Tyrnauer hot-air baths were installed in 1909 for the treatment of similar complaints.8 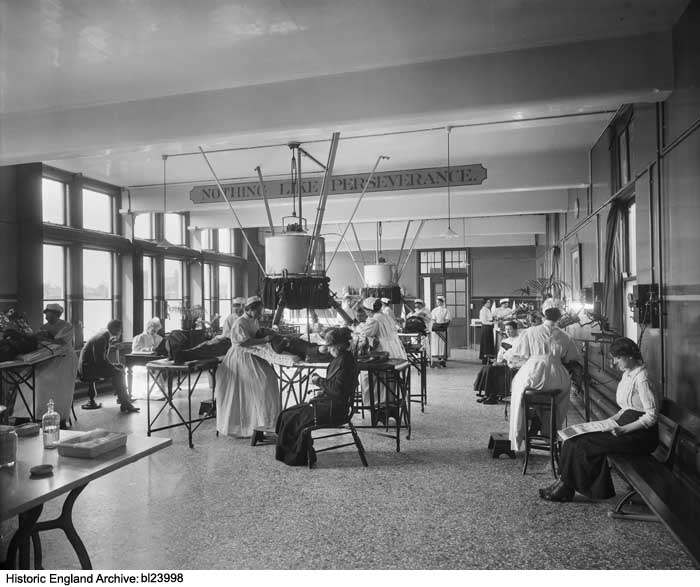 The first and second floors of the building contained more specialist departments. Their plans were arranged by a similar formula, with corridors encircling the central waiting hall and light wells above the top-lit surgical and medical rooms on the ground floor. An assortment of rooms for waiting, consulting, operations and recovery skirted the perimeter of the building, forming suites for each department. The first floor contained the aural, dental, obstetric and massage departments, whilst the second floor was dedicated to the ophthalmic, photography, lupus and electrical departments. These specialist departments boasted the latest medical innovations, including the use of Röntgen rays in radiography and the first Finsen lamp to arrive in Britain. Named in recognition of its Danish inventor and Nobel laureate, Niels Ryberg Finsen, the pioneering device emitted light radiation to treat lupus vulgaris, a tuberculous skin infection once common in east London.9 The hospital’s first lamp was donated by Queen Alexandra in 1900 and initially installed in a single-storey shed located in the hospital garden. By 1909 the lupus department was considered to be the finest of its kind in the capital, with treatment machines for up to twelve patients powered by roof-top generators.10

Subsequent alterations to the Outpatients Department included a roof extension built by W. Lawrence and Sons in 1909–11 to designs by J. G. Oatley, and modifications to the X-Ray Department carried out c.1938 by local builders Walter Gladding & Co. The building was remodelled in 1963, and substantial layout changes effected in the ground-floor surgical and medical suites. The building closed in 2012, when the hospital moved to its new premises and was granted immunity from listing in 2017.11

Three o'clock walk
Contributed by Mariame_Amouche on May 23, 2018

This is an extract from a longer piece of observational writing about a walk undertaken in 2018 by Mariame Amouche, a first year architecture student at the University of Westminster:

The discovery of this forsaken hospital building was, for me, a visual representation of how gentrification can even affect valuable institutional buildings of years gone by. I am saddened by the fact that this hospital building, which once used to be a highly respected structure enabling the functioning of a key public service for the people of London, has been left to perish in the memory of its own past. Stopping for a moment to concentrate on the building, I could almost feel the presence of the faded spirit that the hospital once possessed proudly. I imagined what New Road was like at the turn of the twentieth century when the building was first opened. The scene that came to mind was of a long road with men in top hats and women in long bell- shaped skirts bustling along the sidewalk while early designs of ambulance vehicles zoomed across the street to an abrupt stop as they reached the entrance doors of the emergency rooms located elsewhere on the hospital’s estate. Residents watched from their windows as these vehicles opened their doors and injured men and women were steered immediately into the emergency rooms ready for operating. Imagining this reality brought home to me the real community spirit and life that this building feels like it has now lost. Its location allowed it to act as something of a climax to the street, pedestrians from Commercial Road, like me, having to travel the full length of the road in order to reach the immense structure that there should always be a memory of in this place. 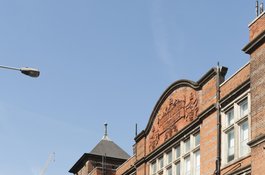 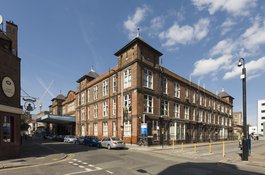 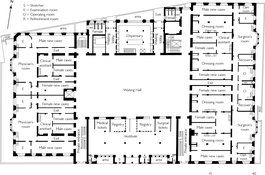 Ground plan of the Outpatients Department, 1903
Contributed by Survey of London 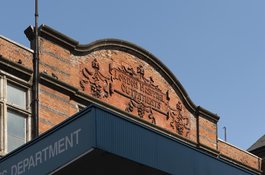 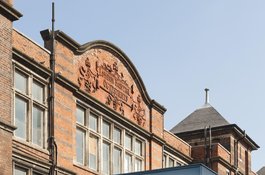 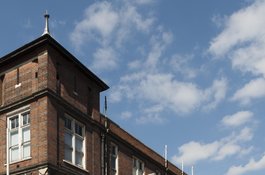 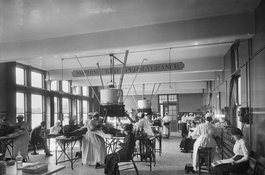