Ambrose King Centre and Grahame Hayton Unit
Back to Map

The former resident doctors’ hostel is the earliest surviving example of a purpose-built staff accommodation block at the hospital. Located on the south side of Mount Terrace, this three-storey block was built by W. H. Gaze & Sons to designs by J. G. Oatley. By 1919 this site had been earmarked for a staff hostel with basement stores for housekeeping provisions. Delays arose because the proposal conflicted with the need for additional space for the outpatients’ department, positioned directly opposite the hostel on the south side of Pasteur Street. The external appearance and configuration of the hostel inherited elements from the prototype for staff accommodation established at the hospital by Plumbe. The block has a robust stock-brick exterior with red-brick and concrete dressings, a string course and chunky quoins. An additional upper storey was envisioned in 1924, and is hinted at only by squat blind windows on the north elevation. A boxy ground-floor porch in Mount Terrace admitted residents into an entrance lobby equipped with a telephone room, an office and a cloakroom. Drawings produced in 1925 specified elegant finishes in the lobby such as patterned floors tiled with black Belgian and white Sicilian marble, which survive partially. A staircase and a lift in the lobby ascended to bedsitting rooms, which were fully furnished and fitted with gas fires. Shared bathrooms, box rooms and water closets were provided at the west end of each floor, adjacent to a subsidiary staircase. At its completion, the hostel contained 41 bedsitting rooms for doctors and receiving room officers. The raised basement, initially unallocated, was converted in 1928–9 into examination and consulting rooms for the outpatients’ department.1

The hostel was later converted into the Whitechapel Clinic, an organisation for the diagnosis and treatment of venereal diseases. The clinic had been established by the LCC in 1930 in response to a shortage of treatment centres, limited to overcrowded clinics in the hospital’s skin and genitourinary departments. The LCC took over the services provided by the hospital, initially leasing premises in Turner Street. After the establishment of the NHS, the management of the clinic was transferred to the hospital. In 1989 the centre was renamed in honour of Ambrose King, a Hackney-born physician who trained at the hospital and gained a position as a senior assistant in the clinic, subsequently rising to its directorship. The building continues in use as the hospital’s venereology department. The interior has been modernized extensively and the basement contains the Grahame Hayton Unit, a HIV clinic.2 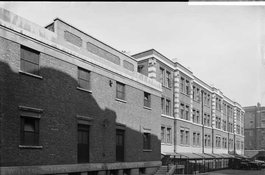 South Elevation of the Ambrose King Centre from the south-west in 1928, when it was known as the Resident Doctors' Hostel
Contributed by Historic England 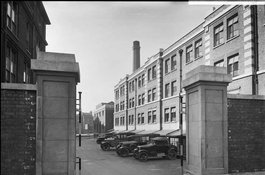 South elevation of the Ambrose King Centre from Turner Street in 1928, when it was known as the Resident Doctors' Hostel
Contributed by Historic England 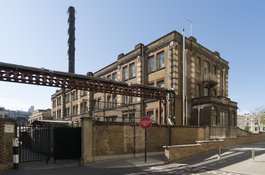 The former Resident Doctors' Hostel of the London Hospital, view from Turner Street in 2017
Contributed by Derek Kendall 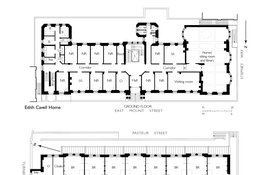