32-34 Commercial Road, with entrance to Riga Mews
Back to Map

Among Whitechapel's most notable and noisome industries in the eighteenth century was the Buckle Street white-lead yard. Present by the 1720s, this extensive works covered about an acre of ground at the east end of Buckle Street. Richard Lindsey, a City merchant, began to acquire this property in 1706 and appears to have held an interest in the site’s first white-lead works. He fell bankrupt in 1728 and made way for (Sir) James Creed (_c._1695–1762), who then accepted the role of treasurer to the ‘Company for melting lead with pit and sea coal’.1 Creed went on to make a fortune in the manufacture of white lead, principally for paint, also casting lead for use on churches and other buildings. He pioneered the chamber method of white- lead manufacture, taking out patents in the 1740s that outlined the principles of a method that was not thoroughly adopted until the late nineteenth century. Rather than, as was conventional, leaving rolled lead plates in pots of vinegar stacked several layers high over a bed of horse manure, he hung long thin lead straps over timber beams in chambers heated by stoves. This speeded up corrosion and reduced contamination. It was all the same a noxious and dangerous process, with known risks. Of Creed’s labourers it was said that they ‘are sure in a few Years to become paralytic by the Mercurial Fumes of the Lead; and seldom live a dozen Years in the Business.’2 Creed also had a related factory and warehouse at Horsleydown in Southwark from at least 1751, making lead shot. His innovations led to fellowship of the Royal Society and a knighthood. He kept houses on Mansell Street and in Greenwich. In his last years Creed was both a Director of the East India Company and an MP, as which he proposed an Act of Parliament for ‘more effectually discouraging and preventing the stealing, and the buying, and the receiving of stolen lead, iron, copper, brass, bell-metal, and solder, and for more effectually bringing the offenders to justice’.3

After Creed’s death, the Buckle Street white-lead works continued under Ann Creed, a daughter who took up contracts to supply milled lead to Woolwich Dockyard until about 1775. From around 1770, others began to be associated with the lead works including Thomas Farr, Flower Freeman, William Usher and Robert Campbell (1738–1828), James Creed’s son-in-law, who lived in Blackheath. Usher, Campbell, Elizabeth Farr and Sarah Birch were insured for the Whitechapel factory in 1806, along with lead flatting mills at Horsleydown. Under the charge of William Usher & Co., the Buckle Street works were put up for sale in 1811. The property was advertised as having ‘an excellent commodious modern residence, with spacious yards, mill-house, extensive and very superior drying lofts, stove, warehouses, sheds, stabling, requisite buildings and appendages, adequate to conduct a concern of magnitude, which has been carried on upon the premises upwards of a century’.4  A row of eleven small houses built across the yard’s east end around 1815 included forerunners of 23–37 White Church Lane. The large yard persisted, and its later occupants included John Marshall, a boilermaker present around 1840, and Deeley & Clarke, alternatively George Deeley & Co., mechanical engineers, who built a warehouse in 1845–6 and appear to have made sugarhouse machinery.5

Buckle Street, Colchester Street and Plough Street also hosted a smattering of small factories and warehouses into the nineteenth century. In 1804, Messrs Pyke of Colchester Street patented ‘improved pencils, with an inlaid rule, and containing two slides, one of black lead, the other of a curious article which will write on a glass window, (by hard pressure) woollen cloth, slate, slate paper’.6  A silk dyer named Davis continued to work in Buckle Street in the 1820s, and the nearby Red Lion Foundry claimed three forges and a ‘powerful foundry crane’ when it was sold in 1852.7

Riga Mews is a development of flats from 2004 occupying a former timber yard from which the street-side buildings of 1873 were restored as flats, shops and offices. It is representative of smaller-scale schemes of renewal in Whitechapel that were typical before blockbuster towers arrived after 2010. James Jabez Chalk (1836–1899) and Seymour William Chalk (1838–1909) were timber merchants with a wharf in Limehouse and a yard in Cannon Street Road, founded in the early nineteenth century by their father, James Chalk. In 1872 the Cannon Street Road lease was not to be extended so the brothers opened negotiations with the MBW. They considered several sites on the new section of Commercial Road, including that soon occupied by Morrison Buildings North (see No. 35A), before settling here. Unusually, as the road’s building plots were mostly sold on eighty-year leases, they bought the freehold, for £1,250. George Vulliamy, the MBW’s architect, was unenthusiastic about a timber yard on the new street, fearing a gap in the frontage. Designs by the Chalks’ architect, Charles Arthur Legg (1832–1906), with two two-storey buildings flanking an imposing gate, were no doubt intended to meet this reservation. They underwent several revisions, notably when S. W. Chalk decided to live on the premises. He failed to persuade Vulliamy to allow his house (No. 34, to the east) to be a storey higher. This presumably explains the formation of a room between the houses, somewhat concealed behind the substantial pedimental gable over the cartway to the timber yard. This also gave Chalk access to the first floor of No. 32, which originally had no staircase from the ground-floor office. The symmetrical stock-brick group of 1873 was soberly classical, with stone dressings, rusticated brick quoins and segmental-headed windows, those to the ground floor tripartite.1 In 1886–7 S. W. Chalk had his way and a third storey was added to No. 34 to matching designs by Adrian Lane (1852–1888), architect, by Amos Eaton, the Whitechapel High Street builder. By then known as Riga House, a gesture, no doubt, to the source of the Chalks’ timber trade, No. 34 already included a conservatory, bathroom, nursery and servant’s room. In 1901 a further office was added behind No. 32, where a staircase was then or soon after inserted. After S. W. Chalk’s death in 1909, the timber business continued through sons and grandsons of both J. J. and S. W. Chalk. The yard was apparently vacant by the early 1970s. No. 34 was let to a succession of hosiers, woollen merchants and tailors.2 A mixed-used scheme of 1997 by Time Square London Ltd that would have used the yard for storage and distribution came to nothing, and the site was redeveloped in 2004–5 by RS and PS Developments to the designs of Axis Architects. The listed front range was restored in a rather dry-cleaned manner, with ground-floor commercial use below four flats. Steel balconies were added to the rear, and the first-floor flats were given a bedroom each over the cartway. The ground- floor window of No. 34, which had been made plate glass, was replaced to match the original, and No. 32 was raised a storey to mirror No. 34 in not-quite matching stock brick, reinstating the symmetry on which Vulliamy had insisted. A three-storey block of five flats and workshop/office units were built behind in the yard, the latter in the manner of a light-industrial building, with large steel-frame windows and rendered walls.3 The ground floors of Nos 32 and 34 were in 2019 used as a solicitor’s office and a beauty salon. 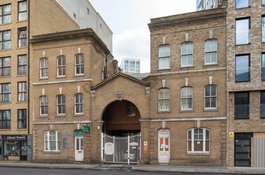 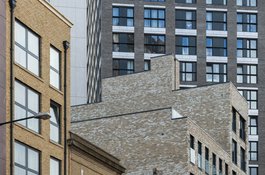