London Muslim Centre
Back to Map

2003-4, centre comprising halls and classrooms, with offices in business wing

The East London Mosque raised £600,000 to buy the land west of the mosque from Tower Hamlets Council in 1999 and the purchase was completed in 2000. The community centre part of the project, which had been initially designed to be two storeys and to include shops on Whitechapel Road and a roof terrace, intended for_ Eidgha_ (Eid prayers), was now taken forward with revised plans from the Frederick Gibberd Partnership. Since having designed Regent’s Park Mosque this firm had maintained a track record in mosque design, principally through Richard Biggins. Prince Charles and Prince Mohammed bin Faisal Al Saud (1937–2017), a son of King Faisal of Saudi Arabia, visited to launch the initiative on 23 November 2001 and planning permission was granted in February 2002. Bamfords Trust PLC, led by Mohamed Arif Zabadne, was appointed as the building contractors. In what turned into a design-build approach, Bamfords imposed revisions for the sake of cost reductions, and Gibberds produced a simpler and cheaper scheme in June 2002. Bamfords then switched architects, replacing Gibberds with Markland Klaschka. David Glover of Arup was also involved. There were further revisions to what ended up raised two further storeys to be a six-storey main block, Gibberds’s roof terrace abandoned. The much changed scheme was approved and built in 2003–4. The Centre cost £10.4m of which £2.5m came from Tower Hamlets Council, the European Regeneration and Development Fund and the London Development Agency. There was also support from Sure Start and the Bridge House Trust. Community fundraising was critical, and was seen through under the supervision of Dr Muhammad Abdul Bari, the East London Mosque Trust’s Chairman from 2002 to 2013 who had been instrumental in the link-up with The East London Citizens Organisation (TELCO) in 1996. More than half the total cost was raised through donations from local worshippers and from around the UK, around ten per cent from international sources, and the remainder from the sale of assets.1

The London Muslim Centre is a steel-framed and brick-clad building. Its main Whitechapel Road elevation has a full-height and therefore attenuated eight- bay arcade, of red brick with blue-brick spandrels and tympana. There are shop units in the four western bays and lettable offices in the ‘LMC Business Wing’ at 38–44 Whitechapel Road, entered to the far west in a setback bay that rises in yellow-stock brick.

A portico to the east adjoining the mosque was much redesigned. It ended up with a geometric-arabesque tiled panel that curves inwards over the entrance between white blockwork piers. Inside, a triangle-plan concourse leads to the centre’s main hall, which is set diagonally echoing the mosque’s prayer hall in being oriented to Qibla to provide for overflow prayer-hall use, which allowed the mosque to accommodate up to 10,000 worshippers. This orientation was not an element of the earlier Gibberds’ designs. The centre also houses basement ablutions and a gym/youth centre, a ground-floor nursery to the south and upper-storey rooms for private schools and community use, increasing capacity for social work, healthcare, training and advice. It substantially consolidated the East London Mosque’s local presence.

Early history of the site of 36-98 Whitechapel Road
Contributed by Survey of London on April 19, 2018

Long frontages of waste ground on the south side of Whitechapel Road were the subjects of 500-year manorial leases from Henry, Lord Wentworth, in 1585. A 528ft stretch on the site of 100–146 Whitechapel Road, extending back 132ft at its east end so as to include what was to become the site of Vine Court, went to James Platt, a London gentleman; Thomas Wilson, a brewer, already had tenure of the westernmost 66ft. John Leyland took an equivalent lease of a 237ft frontage adjoining to the west, his plot being of shallower depth and narrowing to 26ft at its west end; this took in the site of what is now the north part of the East London Mosque. Leyland already lived in a house here to which there pertained ‘a great hog yard and hovel or carthouse’,1 with a new barn and a number of other houses nearby. Smaller plots westwards were leased for 500 years in 1589 and 1591. ‘Sundrie’ houses and other buildings were built on Platt’s land, and by 1658 when Meggs’ Almshouses went up at its west end, there were twenty-one buildings further west on the Leyland land, which had come into the possession of Richard Garford. A windmill had risen on the corner with the footpath that later became Fieldgate Street. This whole Whitechapel Road frontage had been largely built up by 1682, with Tongues Alley roughly where the mosque now stands.2

On the east side of what was to become the Fieldgate Street corner (the site of 36 Whitechapel Road) was the Three Colts public house, built in 1708 by William Crayford, a City carpenter. Thomas Holbrooke, an armourer from Barking, who held one of the smaller manorial leases of _c._1590, gave Whitechapel parish six small cottages in trust in 1644 to house the poor, these being on the site of 42–44 Whitechapel Road (now part of the London Muslim Centre). Holbrooke’s cottages were replaced in 1804–6 by two shophouses built by William Green, a turner, and Richard Dames, a cooper, supervised by Samuel Page acting for the parish. There were bow-fronted shop windows and central-staircase layouts in 13ft-wide plots; the first occupants were brokers in household goods, typical of late-Georgian traders in the locality. Adjoining to the east was the Black Horse and Windmill, where William Quick had a brewhouse through the middle decades of the eighteenth century. His son, John Quick (1748–1831), left home aged fourteen to start a successful career as an actor.3

Further east, Tongues Alley had been reshaped as two small yards. Around 1740 Little Tongue Yard (entered between the sites of Nos 52–54) enclosed about five houses and Great Tongue Yard (entered between the sites of Nos 76–78) comprised fourteen small houses and stables held by William Fillingham. The larger yard was part of a small estate with a number of small houses on the adjacent frontage that passed from John Guy to Anthony Denew in 1746. Denew’s widow Mary (née Gianinetti) held the property from 1755 to her death in 1800. Part of this holding, just west of the entrance to Great Tongue Yard, was the Three Goats Heads public house (on the site of 74–76 Whitechapel Road), present by 1730. It moved west to the site of No. 62 around 1800 under Joseph Smith and became the Brass Founders’ Arms; that disappeared in the 1840s. William Scourfield (d.1803), a tobacco-pipe maker, had a house and business on the site of No. 64 by 1781, continued by his son Thomas Henry Scourfield (d.1842). Thomas Higgs, an auctioneer and cabinet-maker, was at the site of No. 80 and a landlord in Great Tongue Yard through the early nineteenth century.4

Another small yard behind the site of Nos 86–88 was perhaps associated with James Turner, a timber merchant and the property owner at the site of No. 90 in 1790. It passed to Edward Stubbs, a coach and harness maker. In partnership with John Dixon Hancock, Stubbs extended premises on the frontage and into Great Tongue Yard in the early nineteenth century for a large coach-building factory. In that period Samuel Hetherington Hurt, a carpenter, had a timber yard behind the site of No. 96. Between what became Nos 98–100 was an entrance to Orange Court, which took its name from the Prince of Orange’s Head public house on Fieldgate Street. This small clutch of houses (alternatively Orange Row or part of Hampshire Court) was a late eighteenth-century westwards extension of Vine Court. Between the Earl of Effingham public house (see below) and Meggs’ Almshouses was the entrance to Hampshire Court, which comprised about thirteen small houses, evidently redeveloped in the late eighteenth century.5

The stretch of Whitechapel Road east of the Fieldgate Street junction continued as a miscellany of humble and disparate two- and three-storey buildings in quotidian uses through the Victorian period up to the Second World War. One of the least usual businesses was that of William Shemida Halliday, a musical instrument maker at No. 40 in the decades either side of 1900. Also atypical were the presences of the East London Observer, which had its offices at No. 48 by 1870 until the Second World War, and of the Presbyterian Jewish Mission at No. 58 by 1890 to 1913, no more than a small mission room under classrooms. No. 78 was a beer-retailer’s through the Victorian period winding up around 1920 as the Veteran Beer House.6

Little Tongue Yard had a boot and shoe warehouse–factory on its north side, built in 1867 with Thomas Chatfeild Clarke as architect. Great Tongue Yard’s equivalent was a crockery warehouse that was converted to be a cigarette factory, held by Farmville Tobacco Ltd in 1910. Myer Woolf built a millinery factory–warehouse in Great Tongue Yard in 1926–7.7

David Hart, a weighing-machine maker at the site of Nos 82–84, had rebuilt what had been Stubb’s coach-making premises to the rear by 1864. These soon became part of Sydney Bryant Hodge’s sugar refinery, large premises with six- and eight-storey blocks extending back to Fieldgate Street (No. 17) across much of what is now the East London Mosque and Maryam Centre site. The refinery’s origins had been around 1803 with Henry Eggers, who was succeeded by Friend & Boden among others. Hodge took over in 1851. It closed after Hodge’s death in 1878 and a fire in 1879. The site was sold in 1882 and cleared around 1889, its back part giving way to Great Eastern Dwellings.8 The frontage at Nos 82–84 became that of the Barbican Mission to the Jews, founded in 1882. It moved from Finsbury Square to Whitechapel in 1900 and put up a red-brick building that was enlarged in 1909. The mission hall and chapel backed onto the Fieldgate Street Great Synagogue. As with a number of other such establishments in the East End, the Jewish community was chiefly attracted to the Barbican Mission for the free medical and dispensary services that it offered, services not available elsewhere.9

Krone & Sesemann, surgical instrument makers, were at No. 92 by 1870 to around 1900, followed by Nathan Margolis, an ironmonger. Benjamin Napper, a leather merchant, and his successors at Nos 94–96 from around 1870 to 1940 had a glass-roofed warehouse to the rear, probably built in 1887 to plans by Harry Oliver (Whitechapel’s District Surveyor), of the firm Wigg, Oliver & Son. At No. 98, John Ashbridge, solicitor, was followed around 1900 by Abraham Pincus Goldenfeld & Co., basket dealers.10

In 1937 a scheme was advanced for a large boxing hall extending from 54–78 Whitechapel Road across Great Tongue Yard and Little Tongue Yard to 23–37 Fieldgate Street. The architect for this was Richard Seifert, still in his 20s. It appears to have come to nothing.11

Across all this property Second World War bomb damage was extensive. Nearly all the Whitechapel Road properties had been cleared by 1953, survivors being at Nos 36–46, 54–56 and 68–72. By 1968 these too were gone, and the open ground (acquired by the Greater London Council) was used variously for the assembly of casual tailoring workers and others, and more enduringly for car parking. That use continued until the East London Mosque and associated buildings went up between 1983 and 2013.12 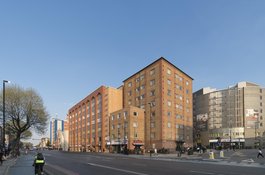 The London Muslim Centre with Mosque Tower, from the west in March 2017
Contributed by Derek Kendall

This film was made in 2018 for the Survey of London by Nurull Islam and Rehan Jamil. It documents the changing South Asian restaurant trade in Whitechapel, and includes the restaurant located in this building.