Turner’s Square on the site of 122–130 Whitechapel Road was redeveloped with larger houses around 1820 and obliterated by no-doubt taller rebuilds on the forward building line by 1873.1

‘AWB 1901’ at the centre of the parapet on the bold and architecturally eclectic five-storey commercial building at Nos 128–130, records its construction in 1900–1 by Arthur Winckles Brown, a corn chandler, who spread here from premises at and behind No. 132. Brown also operated as an oil- and colour-merchant and as his own builder. He let out the ground-floor spaces, that at No. 128 as a restaurant. Some of what were intended to be amply lit workshops above were adapted to be living spaces in 1902 in what came to be known as ‘Brown’s Buildings’.2

There had earlier been a timber-built carriage and perambulator factory on the site of No. 128 and a three-storey brick warehouse on the site of No. 130. That had gained notoriety as Henry Wainwright’s mat and matting warehouse and packing depot for his brush-making factory on the other side of the road. It was here in 1874 that Wainwright murdered Harriet Lane, his mistress, her body not being discovered until a year later. It has been said that the back of Wainwright’s warehouse survives, but that is not so. The three-storey three- bay workshop and warehouse block at 1A Vine Court was erected in 1902–3 for A. W. Brown. John Robert Smith was his architect, and may thus also have been responsible for the preceding front building. By the 1920s ‘Brown’s Buildings’ housed tailors’ workrooms, sixty-seven people accommodated in the block as a whole above the restaurant at No. 128, Folman’s, then Feld’s, then the Central Kosher Restaurant from the 1920s to 50s. It had become the Iffat restaurant by 1973, with bedrooms above for seventeen persons said all to be staff. There are now offices above shops.3 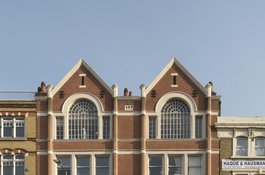 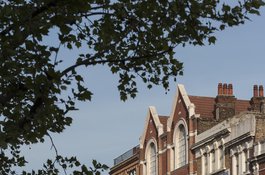 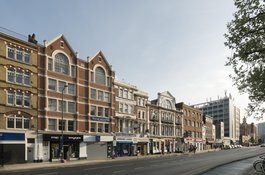