Nathaniel and Raphael (Ralph) Davis were the youngest of the seven builder sons of Woolf Davis, and the only ones known to have had some sort of architectural background (they trained as draughtsmen while their ex-furrier elder brothers went into building).

They built mainly housing and flats above shops, on many east London sites, including the north side of Fashion Street, Spitalfields (1896), which survives, and Underwood Street, west of Vallance Road (1896), which doesn’t. Buildings of theirs near this complex - in Alie Street, Rupert Street and Christopher Court - have also gone. As has a commercial building on the east side of Leman Street (nos. 25 and 27; built in 1893, when they were in their early 20s) which they called Woolfray House, punning on a staple warehouse commodity of the district and the first names of father and one of the sons, and underscoring that there was, generally, a great deal of mutual financial support within the family.

The block at 20-30 (even) East Tenter Street and 52-60 (even) Leman Street (1901), is larger than most of the Davis sites surviving in east London, and like their smaller, early project on Mercers’ Company land at 76-78 White Horse Road, Ratcliff (1893), consisted of artisans’ dwellings in flats. With the exception of the latter, and possibly Woolfray House, they appear to have favoured the Davis trademark sound red brick.

The red-brick tenements at 52–58 Leman Street and 20–30 East Tenter Street were constructed in 1901–2 to designs by the builder-developer brothers Nathaniel and Raphael (Ralph) Davis, both of whom had some architectural training. Built across Leman Street from Woolfray House, one of their earliest projects, these ten units, four to Leman Street, six to East Tenter Street, are typical of their later approach and local output in scale, style and materials. Ground-floor shops were eschewed in favour of upper-floor workshops. The tenements had been preceded by three large eighteenth-century shophouses to Leman Street. A warehouse to the rear, first present around 1800 and rebuilt as three-storeyed in 1848, was replaced by six short-lived houses around 1880.1 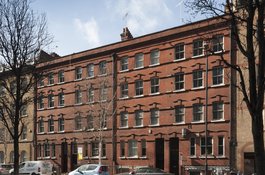 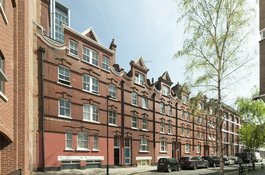