1866–7 mission hall and infants' school, converted for free-school and synagogue use in the 1920s, adapted as a resource centre in 2001–2

This building has a remarkable chequered, yet consistent, history. It was erected in 1866–7 as a mission house and infants’ school for the parish of St Mary Matfelon Whitechapel. First plans were to extend on the garden of an existing house, but in July 1866 the Rev. James Cohen gained the London Hospital’s approval for complete rebuilding displacing two houses – the top end of Nottingham Place (Parfett Street) was narrowly opened up at the same time. The establishment was known variously as St Mary’s Mission House and the Charlotte Street Infants’ School, the building’s purpose signalled through the use of simple Gothic Revival forms. The originally single-storey rear range had high-silled, segment-headed windows and a glazed roof to a room for mothers’ meetings, evening readings and mission work. It communicated with the main block through a wide pointed-arched opening. Double-iron handrails on the main block’s stairs seem designed to provide for young children. Mission use continued up to about 1918.1

The building was next used for a few years by Jewish anarchists to be an International Modern School, following the inspiration of libertarian and non- coercive ‘modern’ schools established in Barcelona by Francesc Ferrer I Guàrdia. Attendance rose to more than 100, but funding difficulties prevented longevity. 'Arbeter Fraynd (Worker’s Friend)', a Yiddish radical weekly paper, and its Jubilee Street anarchists’ club premises had been shut down in 1915. For a time 62 Fieldgate Street was also used as the New Worker’s Friend Club, and by the East London Anarchist Group.

In 1925 the building was converted into a synagogue. The Linus Hazedek and Bikur Cholim congregation, founded with a mission to help the sick, moved here from Burslem Street on the other side of Commercial Road. A new door was formed in the Parfett Street elevation in 1934, but the synagogue did not survive beyond the 1940s. Abraham Spitalowitch, a tailor, was in occupation by 1951, and other garment-makers passed through. Conversion works for continued rag-trade use that included raising of the former classroom to the rear were intended from 1978, but not carried out, though a shopfront for a showroom was inserted in 1981 for Sophia Fashions.Thereafter the building fell into dereliction.

In 1999 a group arising from that decade’s Reclaim The Streets movement conceived the need for a base or action resource centre for direct-action and anarchist groups. Without awareness of the building’s history, 62 Fieldgate Street was purchased, largely through a single supporter with inherited wealth. Refurbishment works for office, workshop and library use as what was initially the Fieldgate Action Resource Centre were carried out in 2001–2 to plans by Anne Thorne Architects Partnership. These involved rebuilding and raising the rear section, which was given a roof garden. Figural graffiti on the shutters is by Stik.2 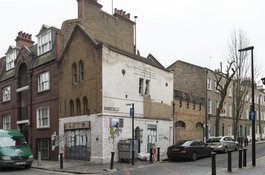 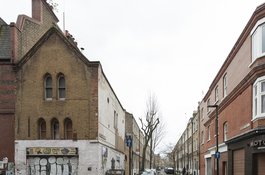 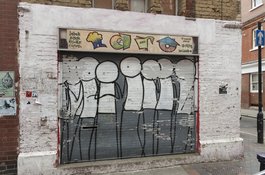 62 Fieldgate Street, detail of shopfront with figures by Stik on shutter
Contributed by Derek Kendall 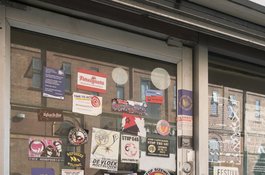