1980-1, built as offices (occupied by the NHS) with a penthouse, converted to school in 2014. The site previously housed the King's Hall.

How we use the London Enterprise Academy, by the students of Years 7 and 9
Contributed by Survey of London on July 14, 2017

The most important rooms to us are the canteen and the sports hall. Aaqil likes the canteen because you can eat there and socialise, though it smells of food, because you can't open the windows. It can feel a bit claustrophobic. Maryam points out this can be a good thing when there is chocolate cake. Junayna brings a packed lunch instead as 'it's not the best food I've ever had', though the cakes are nice. There are flags on the walls in the canteen that show where pupils and staff are from originally. There are flags of Spain, Jamaica, Turkey, Algeria, Italy, France, Bangladesh, Saudi Arabia, Afghanistan, Pakistan, Somalia, Russia, Germany and the United Kingdom.

There is a roof garden, which Maryam likes for the views and the light. Humayra and others do the gardening on the roof garden, on Wednesdays. They re-pot the plants and water them. There are different types of plants, and vegetables. The principal is very keen on the carrots and tomatoes. Sabreen likes it because it is a relaxing place, though it can get too hot. Her favourite rooms, though, are the sports hall and the library, where she spends most time. Samia points out that students can work there as library assistants.

There is a playground behind the building, that used to be a car park. Some cars still park there, maybe one car per week. It is the place the students enter and leave the school, which Mahfuj finds 'empty, dull and small'. Some of the students, though, are planting plants and painting benches and the big plant pots. They are painting them rainbow colours, and mixing colours to make purple and pink, and they decide on the colours themselves. Zerin likes it because it feels nice to get out of the building, to be able to run around and play in the fresh air, or chat sitting on the benches after lunch.

There is a plan for the playground, there will be balconies from the school overlooking it. The work might start in September 2017.

On the third floor there is a hub, with different computer rooms.... the 'geek labs'! Shaon enjoys the PCs and all the technology... especially playing games... though the blue chairs are a bit hard. Half the computers don't work.

The fourth floor hub is where Sultana and her friends hang out, chatting and enjoying each other's company. It's comfortable with a carpeted floor, and cushioned chairs and side tables. The hub is the area in the middle between the rooms at the sides used for lessons.

There is a table tennis table in the basement, which Farmeda likes as she can hang out with her friends. Nihau likes this, too, even though it is quite dark. Humayra says it is loud and fun. The sports hall is on the top floor.

The whole building feels narrow with lots of stairs leading up its seven floors... there are two staircases, one to go up and one to go down, which is a narrower stair... no running or talking on the stairs, or you find yourself in detention, for up to two hours. Abu points out you can also get a detention for having your hair too long.

There is a morning assembly in the canteen, different years on different days.

At break time you can play outside in the playground, or in a room on each floor... not in the classrooms, though. Abu says it's good to get outside as parts of the inside can be gloomy and depressing.

The students of Years 7 and 9 of the London Enterprise Academy were in conversation with Shahed Saleem and Aileen Reid of the Survey of London at a workshop facilitated by the Whitechapel Gallery and Sara Heywood, 14 July 2017

Living in the Old King's Hall
Contributed by Elaine_Evans on Aug. 30, 2017

I lived in a building on this site as a child. The address was 83/85 Commercial Road. It was called the Old King's Hall at one time. I think it might have once been a theatre.

I used to go through the black doors on the ground floor. There was a hall with mirrors on both sides and black and white tiles on the floor. We lived on the top floor. The two windows on the left of the Phoenix plaque was our living room and the two windows on the right hand side of the plaque was my parent's bedroom. We had an outside toilet on the floor below, no bathroom. There was a ladder in the hall outside my parents bedroom that led onto a flat roof above. We also had a kitchen and one other bedroom for myself and my two sisters. It is funny but I never felt as if I was poorly off. In fact we were fine.

The reason we lived here was because my mother wanted to be near her mother at No. 81 Commercial Road. My grandmother died when I was two years old and we stayed in the flat until I was a teenager I think.

A digitised colour slide from the Tower Hamlets Archives collection: 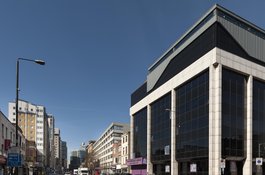