Aaron, Lewis and Matthew Worms, linen-drapers, haberdashers and mercers, had much of this site from the 1820s to the 1850s and other drapers followed. A large warehouse extended across the whole frontage and back along Thomas Street. A two-storey house at the back was adapted around 1880 to be the Tower Hamlets Working Men’s Club & Institute. In premises affected by the arrival of the railway line in 1883–4, this occupancy subsequently appeared under different names, including the Tobacco Workers’ Club and Institute. This appears to have been the venue in 1888 of penny-gaff shows that the Whitechapel District Board of Works attempted to suppress. The club was evidently successful and was enlarged twice, in 1894 and 1906. This ‘Socialist Club’, scantily furnished with a ground-floor coffee bar and notices in Russian and Yiddish, was where a group of Russian delegates, ‘revolutionists’ to the London Daily News, was received on 9 May 1907 upon arrival in London. The next day it hosted a conference preliminary to the Fifth Congress of the Russian Social Democratic Labour Party (the forerunner of the Bolshevik Party), attended by Vladimir Lenin, Leon Trotsky, Maxim Gorky, Josef Stalin and around a hundred others. The Congress proper ran from 13 May to 1 June at the Brotherhood Church, Southgate Road, Hackney.

At this time, Morris Freedman, a furniture dealer, had the warehouse to Whitechapel Road. He was followed by Jay’s National Furnishing Company. In 1934–5 this company (also identified as the Gosford Furnishing Company) redeveloped the site as a shop and showrooms, with Alfred Spiers, architect, deploying a stripped Art Deco style, and G. O. Mallows as builder. The development extended to include reconstruction of the clubhouse, which had become a Zion Hall (4 Fulbourne Street). In 2017 the building houses clothing wholesaling below the Eastenders Snooker Club.1 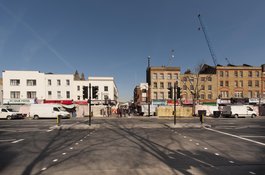 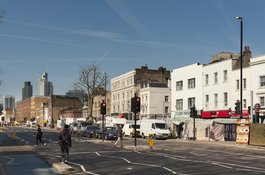 Whitechapel Road view to City in 2016
Contributed by Derek Kendall 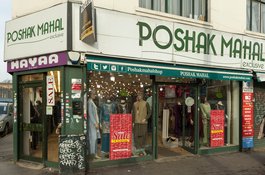