195 Whitechapel Road
Back to Map

In the early nineteenth century there were seven small shophouses east of the site of the Pavilion Theatre’s entrance passage up to the Baker’s Row corner, which was to move west in the 1870s when what became Vallance Road was widened. The western pair housed Benjamin Gomes da Costa, a surgeon and apothecary, and David Cardozo, a tobacconist, up to 1818 when both men died, leaving widow Lucky Da Costa in possession.1

In 1881 the Metropolitan and District Railway acquired the freehold of the site, to build the line that now passes directly beneath the corner. With sewerage works carried out in conjunction with the railway works in 1884, the MBW put up a ‘deodorising’ shed behind the cutting. Complaints about its unsightliness forced alterations in 1886 for workshop use, but it was not until 1908 that Press, Robinson & Co., builders, concealed this behind the present two-storey red-brick group of shops, retaining one unit for themselves and the back workshop, access to which was and is via a passage from a pedimented doorway. Dallas Clothing occupied the premises up to about 2013.2 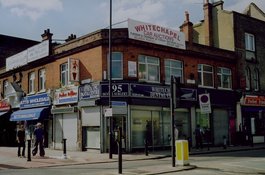