Block A, Don Gratton House
Back to Map

There was a house on the site of 16 Greatorex Street by the early 1770s when John Harrison set up a ropewalk behind. Around 1845 Ind, Coope & Co., brewers, took the long thin ropewalk site to be a stable yard, an adjunct to the company’s main local depot on Osborn Street. This extended most of the way back to Davenant (then St Mary) Street, and buildings were erected north and south of a narrow yard, some going up in 1848–9 with A. Reed of Stratford as builder. The largest of these was the four-storey seven-bay plain stock-brick range that survives, thoroughly refurbished in 2003–5 to be artists’ studios in the Craft Building (No. 12a). It originally stood behind an open street frontage, and in 1880 housed a granary, engine house and harness repairs under forage stores. Further construction by Ind, Coope & Co. in 1871–2 added two ranges of stables and a foreman’s house on the yard’s north side.1

Miscellaneous manufacturing uses came onto the site in the first years of the twentieth century before Samuel David Goldberg, a builder, acquired the premises and spent the period from 1912 to 1921 tussling with the London County Council over improvements that included the replacement of internal structural stanchions in and refenestration of the tall warehouse and infill of the open space in front of it with a building to rehouse Jewish club premises, employing Hobden and Porri as his architects. The enlarged and refronted eighteenth-century house at the north-west corner of the site, immediately across the road from the Great Garden Street Synagogue, had come to be occupied by the Jewish Penny Fund and Jewish Woman’s Tailor’s Insurance, with first-floor infants’ dormitories and a second-storey rooftop playground on a back extension – thirty-two people in all. Later the United Ladies Tailors’ Trade Union was housed along with what had become the Million Penny Fund Day Nursery for the relief of the Jewish victims of the War, but this closed in 1921, rent very much in arrears. Goldberg redeveloped the rest of the north side of the yard in 1935–8. After war-damage at the site’s east end, the Goldberg Investment Co. Ltd oversaw reconstruction and the arrival of clothing-factory use to conform with the other commercial buildings on the larger block. Ownership passed to the GLC in the 1960s, but intended redevelopment did not materialise. In 1982 Mosobbir Ali’s Daily Quilting Co Ltd adapted the far south-east corner of the site to provide a prayer room. Alma Leather Ltd was a later commercial occupant alongside occasional use by the Celestial Church of Christ. Most of the site, including the eighteenth- century house, was cleared in 2001–3.2

In the first decade of the nineteenth century a row of twenty-two small houses had been built in front of the ropewalk at what became 76–118 Old Montague Street. Abraham Davis replaced this in 1891–2 with the same number of properties, each with a shop and four flats. This row was designated for slum- clearance in 1965, but redevelopment did not happen under the Greater London Council and the property passed to Tower Hamlets Council. In 1990 new plans for mixed use were promulgated and Levitt Bernstein, architects, came to be involved. Yet it was not until 2003–5 that the Shaftesbury Housing Association combined with T. P. Bennett Architects to put up the complex of yellow brick and cement-faced four-storey blocks, timber clad at the corners, that extends from Greatorex Street along Old Montague Street to Davenant Street. This was built to provide student housing, the ground-floor accommodation in all but the separate Block A on the Davenant Street corner intended for commercial use. The housing is managed by Sanctuary Students, with the University of Arts London placing students in the main block, Don Gratton House. Alma Home, leather furniture, continues at 12–14 Greatorex Street, providing a link with earlier occupancy. The main ground floor was taken for use by the National Health Service in 2008 to house the Greatorex Street Children and Young People’s Centre at 16–18 Greatorex Street, with the Institute of Psychotrauma in Don Gratton House. The early-Victorian range that had been named the Craft Building was converted to provide more student accommodation in 2010–11.3 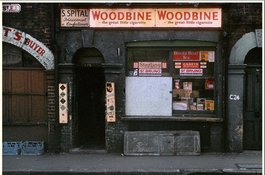