Christopher Clarke (1613–72), a Warden of the Drapers’ Company, acquired property in Whitechapel including what is now 131–145 Whitechapel Road (minus the public house at 133) which he obtained in 1659 from the Parliamentary Commissioners responsible for selling forfeited estates. This land was bequeathed to the Drapers’ Company and managed as part of their Clarke’s Trust. At its west end was King David’s Alley, the public house that later became the (Old) Blue Anchor (No. 133) having been the David and Harp in the eighteenth century. In 1717 Robert Phipps, a citizen plasterer, was granted a 61-year lease undertaking to rebuild sixteen small tenements, probably including those on King’s Arms Court or Cart and House Yard. The King’s Arms public house was on the site of No. 145 up to the 1750s. The specification did not mention brick, suggesting that these humble houses were probably timber built. The yard was cleared and the frontage at Nos 135–145 redeveloped again in 1759 by Thomas Kinlyside, a Spitalfields carpenter, on new 61-year leases, this time in brick as a row of six good-sized but unequal three- and four- storey houses that appear always to have incorporated shops. Early tenants included James Langham, a currier, Stephen Hicks, a coach harness maker, Aaron Anderson, an indigo blue manufacturer, William Roper, a pattern or last maker, and John Stackard, a leatherseller. Around 1820 Joseph Cordingley built a floorcloth painting room behind Nos 135–137. Two shophouses at 147–149 Whitechapel Road with cottages at what was 1–3 St Mary Street were an outlying piece of Spencer Phillips property. 1

The Limciecz or St Mary Street Synagogue stood behind No. 147. Present by 1890 it was affiliated to the Federation of Synagogues from 1894 when it had 55 members. David Applebaum, the chazan (cantor), was at the centre of the ‘circumcision scandal’ of 1902–5, when a series of deaths led to the regulation of mohelim (ritual circumcisers).  Galleried and top-lit, the shul or chevra, partially rebuilt in 1911, had a return frontage at 3 St Mary Street. These premises and the rest of Kinlyside’s terrace of 1759 (Nos 139–145) were cleared after Second World War bomb damage. A petrol station was formed in 1953–4, and rebuilt with a canopy over the forecourt in 1991.2

North side of Whitechapel Road at the junction with Davenant Street, 1971
Contributed by Survey of London on Dec. 16, 2016

This digitised colour slide from the Tower Hamlets Archives collection was taken in 1971 outside where the East London Mosque now stands: 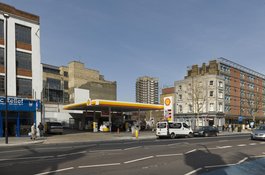 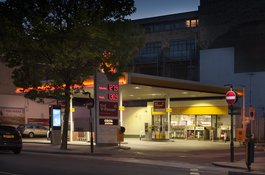