95-6 Whitechapel High Street
Back to Map

95-6 Whitechapel High Street
Contributed by Survey of London on July 13, 2018

This was a postwar repair of 1954-5 by Trehearne and Norman, Preston and Partners, architects, for Barclays Bank of a substantial Edwardian commercial building they had adapted for the bank in 1937-8. Only the third and fourth floors were completely rebuilt (the second floor refaced and metal windows in concrete surrounds inserted to match the new Utility design) which may explain why it has slightly more architectural presence than the other High Street postwar rebuildings. It also retains the two-storey back extension of the previous building.1

The design carried up the surviving canted central oriel from second to fourth floors, but whereas the Edwardian building was topped by a gable, this ends at a simple cornice. The 1903 building had typical large plate-glass display windows to the first floor, but these had been replaced in 1937-8 during adaptation to a bank with offices above. The western edges of the new building in 1955 were keyed for the rebuilding of neighbouring No. 97, a rebuilding that, sixty years on, has yet to happen.

The building of 1902-3 was erected by G. Munday & Sons, builders of Trinity Square in the City, to the designs of Harrington & Ley, architects. The client was ‘Sir J. Baker’, probably the Portsmouth MP, outfitter and hosier, who had held 95 Whitechapel High Street from 1872.2

It replaced two separate two-storey shop-houses, possibly built by Edward Hawkins in the eighteenth century. In 1797, when it was sold following the bankruptcy of its occupant, Thomas Fane, an upholsterer, No. 95 was described as ‘recently modernised, and put in substantial repair’, with a backshop, stable, chaise house and loft over accessed from Spread Eagle Yard, whose entrance it adjoined.3 By 1895 its front was ornamented with three giant- order pilasters.4 No 96, hemmed in on three sides, was coffee rooms in the 1850s until 1865 when it became R&J Dick’s shoe warehouse, whose burning down in 1900 may have prompted Baker’s rebuilding.5

After Baker’s death in 1909, the shop closed and rag-trade wholesalers took over, with offices and tailoring workshops above. In 1921 68 people, mostly women, were employed in the workshops.6 Barclays remained in the war- damaged building till the rebuilding remained there till the 1990s. In 2013 the basement, ground and first floors were converted to restaurant use (Moe’s Diner) and the top floor into two studio flats, with offices in between.7 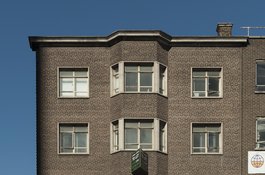 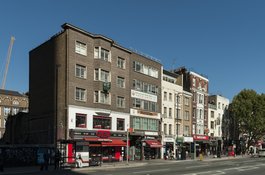 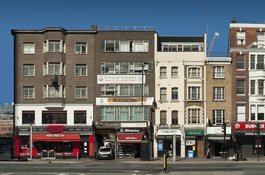