83 Whitechapel High Street
Back to Map

83 Whitechapel High Street
Contributed by Survey of London on July 10, 2018

A utilitarian rebuilding of 1957, originally with steel Crittall windows and a step-back to the fifth floor at the rear. In 2007 the upper floors were converted to self-contained flats (known as Gouldy House, 82a Whitechapel High Street) and the top floor setback infilled with a mansard extension in 2010.1 The building sits on the footprint of a war-damaged stolid Jacobethan building by John Hamilton, architect (1845-1907), of four brick stories with composite-stone dressings, a shallow oriel, and an attic floor in a shaped gable, and wide display window lighting the first-floor showroom. It was built in 1899 by Coulsell Bros of Morpeth Street for Philip Moses, outfitters who remained till c. 1915.2 The 1899 building replaced a sixteenth- or early seventeenth-century timber-framed shop house, of three storeys with shallow oriels to the first and second floors and a tiled gambrel attic, very likely an eighteenth-century alteration. William Hart, a hat manufacturer who went bankrupt in 1846 was there from the 1840s to c. 1865, letting residential rooms ‘with use of a pianoforte’ above, and, after a brief interlude as a jewellers, in 1870, Samuel Gaved, set up as an ironmonger after four years as a tobacconist next door at 82, the business taken over in 1885 by Philip Cohen, ‘the cheapest house for furnishing ironmongery in the East End’. He was replaced by the oft-moving Philip Moses, outfitter, who rebuilt the premises in 1899.3

Use after 1915 included Hines, china and glass retailers, and from 1933 Alberts menswear, who later opened a branch at No. 145. After bomb damage, Alberts relocated to No. 88 and following rebuilding, shop use (fabrics etc) with offices above continued till c. 1970 when Instone, a specialist travel agent arranging house parties – ‘for the “discerning traveller” ... no family groups, boisterous children or rowdy teens’ - and escorted tours to Russia continued till c. 2005, followed by a newsagent until opening as Exmouth Coffee Company, an independent coffee shop, in 2012. 4 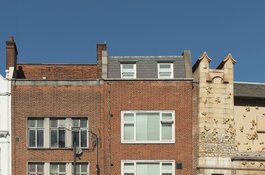 by kitsune, from Vimeo Lucia Fioretti/kitsuneart decorates the window of ExMouth Coffee Company, 83 Whitechapel High Steeet, as part of the London Window project. The film shows Whitechapel High Street as it was in 2014, with a panning shot of the south side of the High Street, including the Lloyds TSB brown brick building demolished in early 2016 for the Aldgate Place development.