This site was acquired by the adjacent Great Garden Street Synagogue in 1934 and a year later Messrs Joseph, architects, prepared plans for two buildings, to be a welfare centre and antenatal clinic for the Federation of Synagogues. These were approved, but not seen through. The site stood empty until 1961–2 when development was carried out through Dennis S. Lichtig, architect, and J. Hyde & Co. Ltd, builders, to provide the synagogue with a single-storey communal hall. In the late 1960s this was named the Morris Kasler Hall, after a leading member of the congregation, and became home to the Kosher Luncheon Club, filling a gap caused by the demise of the area’s small Kosher restaurants. Above were two storeys containing four flats.1

Much of the synagogue's congregation and the Federation’s adjoining offices moved away, but the luncheon club, the last of its kind and among the last manifestations of the Jewish East End, continued up to 1994, having endured a racist arson attack in 1992. The complex was acquired by the Bethnal Green Business Development Centre Trust, with the help of a European Union grant as part of the Bethnal Green City Challenge, for a conversion to offices and studios. This was carried out in 1999 by Ankur Architects for use as a Business Development Centre. There are six flats above the former hall, the block having been raised a storey in the late 1990s.2

The Kosher Luncheon Club was owned by my uncle, Lou Morrison, and Connie Shack, both of whom are sadly no longer with us. It became well known enough for the Sunday newspaper The Observer to run an article on it in their colour supplement in the 1960s. (Probably still in their archives.) Not only was the food delicious but the portions, especially the fish, were HUGE.  Lou used to joke, 'We're so posh you don't choose the fish. The fish choose you.' Just round the corner from Blooms, it never had to live in their shadow.  A little gem, after the  massive 'redevelopment' of Old Montague Street. 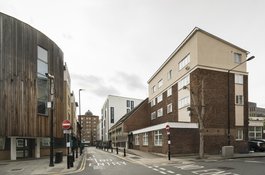 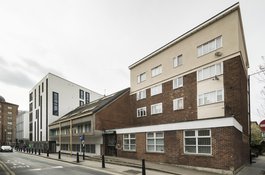