3 White Church Lane
Back to Map

White Church Lane's origins are as the north end of Church Lane, the only early north–south route through the parish of Whitechapel, in existence by the seventeenth century to link Well Close to the south via what is now Back Church Lane and a dogleg west onto White Horse Lane (subsumed into Commercial Road when it was extended), before another turn to run north to meet Whitechapel High Street along what was renamed White Church Lane in 1939.

This northern stretch may not have been much built up until the 1660s, back building by the 1670s indicating density and low status. Church Rents or Maidenhead Court (nineteen mostly one- or two-hearth houses), later Dyer’s Yard, was behind the east side, on the site of No. 4A. Thomas Bridgwater, a silk thrower, was among early occupants in houses that appear to have shared upper-storey workshop space along with an adjacent warehouse. This yard was largely cleared in the 1760s for enlargement of the churchyard, a tiny four- house court, Church Place, squeezed in by 1790. Off the lane’s west side, Hatchet Alley (later Spectacle Alley, now Whitechurch Passage) gave onto Adam and Eve Court (thirteen two- to five-hearth houses) on its south side until about 1800; beyond there was Back Yard, already gone by the 1740s. Tenure of a significant part of this area appears to have passed from Robert Burchall junior to Dr Peirce Dodd in 1738. A substantial house on the lane’s west side at the corner of the alley facing the churchyard gate and next door to the Cow and Hare public house was held by John Weld (d. 1746), a silk thrower, then by Samuel Darkin (d. 1756), a Barber Surgeon who operated from ‘the sign of the Bleeder’, followed by his son, Samuel Darkin the Younger, ‘Bleeder and Operator of the Teeth’. His successor, here from about 1767 to 1787, was John Parkinson, another surgeon dentist whose son, James Thompson Parkinson (1780–1859), was in later life an architect and surveyor to the Portman Estate. A white-lead works and a cooperage lay to the west of Church Lane south of Colchester Street (now Manningtree Street) up to 1811. There was a sugarhouse on the east side opposite Colchester Street by 1769, when it was James Greenhow’s. It passed to Davey & Hounsom, John Doorman and Thomas Hodgson up to 1831. The Fir Tree public house was at the south end of the east side by 1760, adjacent to a site later taken for John Furze’s brewery, and north of John (later Assam) Street there were livery stables, possibly built around 1772 with six houses when the manor of Stepney ceded freehold possession of two acres on Church Lane’s east side to Samuel Bull and John Thompson Bull. The north end of Church Lane’s east side (Nos 2–12) was wholly redeveloped in the early 1850s and buildings to the south were cleared for the extension of the Commercial Road in 1869–70. Redevelopment since has been piecemeal, with the central part of the road’s east side replaced in 2000–2 by the Naylor Building West flats, and the south end of the west side transformed by the tower of 2018–19 at 27 Commercial Road.1

3 White Church Lane
Contributed by Survey of London on June 20, 2016

This two-storey brick corner building of c.1960 was bomb-damage replacement. It was much embellished in 2012 through Global Street Art. Facing White Church Lane is ‘Too much buying not enough taking’ by Lister, the entrance-door shutter has wings by Probs, and the south return to Whitechurch Passage a head by Hunto and ‘The Lady’, a low-relief ceramic by ChinaGirl Tile.1 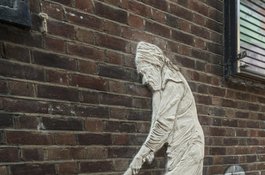 The Lady, by ChinaGirl Tile
Contributed by Derek Kendall 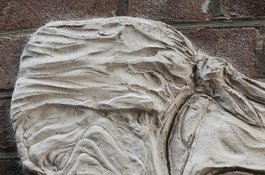 The Lady, by ChinaGirl Tile detail
Contributed by Derek Kendall 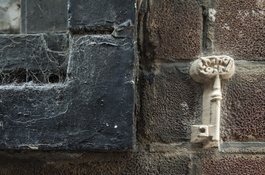