Aldgate Place
Back to Map

Early buildings on Colchester Street and Plough Street
Contributed by Survey of London on July 31, 2020

Around 1681 Thomas Neale acquired garden lands between Alie Street and Whitechapel High Street with a view to draining the ground and laying out streets and houses. He had perhaps begun work on this, and did combine with John Price, who held neighbouring gardens, in the making of Red Lion Street, but late in 1682 he sold up to Edward Buckley, a brewer, who died in 1683. It was his son and heir, also Edward Buckley, who undertook the development of an estate across this area. Colchester Street and Buckle (originally Buckley) Street were laid out running east­–west parallel to Alie Street to the north, and Plough (or Plow) Street crossed at right angles to extend Plough Court (or Alley) south from the High Street. Plough Street terminated prematurely before Alie Street, probably the result of the failure of a plan to have it continue to face Rupert Street. The stub south of Buckle Street was generously called Plough Square in the nineteenth century. Colchester Street west of Commercial Road was re-named Braham Street in 1921, after John Braham (1774/7–1856), a virtuoso Jewish tenor whose undocumented origins were in or around Goodman’s Fields and who as a boy in 1787 sang at the opening of Well Street’s Royalty Theatre.

Among the first-phase builders was Robert Burt, a carpenter of Newington Butts, who built at least four houses on the west side of Plough Street, being granted a seventy-nine-year lease from 1685. Ninety-two properties were assessed for tax purposes as being on Plow Street in 1693–4. This is implausible, but can be interpreted as taking in Buckle Street and Colchester Street, which are not listed. If so, it indicates fairly complete development, though a Mr Biges held a 140ft frontage of undeveloped ground, possibly at the east end of Buckle Street.1

The houses in this small grid of streets were regularly arrayed and modest in size, reflecting proximity to the narrow courts that extended off Whitechapel High Street. Remarkably, seven late seventeenth-century houses survived on Braham Street until demolition for the Gardiner’s Corner traffic system in the 1960s . On the north side, Nos 5–11 had three storeys with steep-roofed garrets and cellars. There was a moulded stringcourse below the first floor, stepped up at No. 11, and a wide plat band below the second. Staircases in two-room planshad moulded closed strings and turned balusters. Opposite, on the south side, Nos 6–10 were outwardly similar, but with one-room plans with twin-newel staircases, comparably finished, in small rear outshuts. In both sets of houses, beams were exposed below ceilings.2

Thomas Shaw, who had the only large house listed as on Plow Street in 1693–4, may have been involved in developing Buckley’s estate. Edward Harrison of Putney, possibly a link to Buckley, held ten houses in Colchester Street. A lease of a group of six houses on Buckle Street and Plough Street was transferred in 1725 from the heirs of Robert Comport, an Aldgate oilman, to William Johnson, a Whitechapel dyer, and Samuel Woodfield, a Shadwell tallowchandler.

Residents of Colchester Street in the first years of the eighteenth century included John Stockton, ‘the blind doctor at the Golden Ball’, 3  Richard Walton, a naval surgeon whose gout and failing eyesight hampered his service in Jamaica in 1704, and Marmaduke Cradock (_c._1660–1716), a leading painter of birds and animals. 4

Aldgate Place
Contributed by Survey of London on Aug. 15, 2019

The Wimpey offer to the Greater London Council in 1978 when it lined up acquisition of the Gardiner's Corner properties included a leisure centre on a triangle east of Leman Street otherwise bounded by Braham Street and the vestige of the old line of Commercial Road that had been named Drum Street. Initially set to be called ‘The Attlee Centre’, this would combine a theatre- conference hall and a sports hall with squash courts. It was a gestural product of planning gain, to satisfy the public-provision ambitions of the GLC and Tower Hamlets. Designs were taken forward through Wimpey and the Sedgwick Group, initially by Trehearne and Norman, Preston and Partners, then from 1982 by Frederick Gibberd Partners, soon renamed Frederick Gibberd Coombes and Partners. The Sedgwick Sports and Conference Centre with the Chaucer Theatre was built in 1982–5 and soon renamed the Summit Sports and Conference Centre. There was a lower-level auditorium with a stage to the east, originally intended to seat up to 700, but built for no more than 400, and squash courts and the sports hall on the upper storeys. There was something of a commercial angle in that the building was linked at basement level to the shopping plaza below the Sedgwick Centre. Leisure centres of the 1980s were usually sprawling low-slung buildings, but this one had its spaces vertically stacked and was externally unrecognisable for what it was. Anonymous, but blandly and blankly impregnable, it was uninviting from any external vantage point, and odd, gimcrack and ungainly as architecture – ‘a white-panelled exterior, tall, with silo-like corner towers; its faux-industrial appearance made even more ludicrous by the giant globe lanterns suspended on arms from the roof.’1 From the outset the auditorium was used more for conferences than for entertainment; in 1986 writing tablets were added to the seats. In so far as it had a purpose, the building was more of the City than of Whitechapel, to serve the area’s new office workers. It lasted only twenty years.2

The easternmost Sedgwick and Wimpey site was on the south side of Commercial Road and Braham Street. This was developed in the early 1980s as a four-storey car park, to designs by Trehearne and Norman, Preston and Partners. Of streamlined profile, it was faced in Holbrook smooth-brown bricks, and was demolished in 2014.3

Following the abandonment of the gyratory in 2008, the east end of Braham Street was available for development. Tishman Speyer (alternatively TST Aldgate Holdings LLC) had put together a scheme for a large building on this composite site that was named Aldgate Place, to complement Aldgate Union in the eastward march of the City. Plans of 2007 for a massive large-floor-plate twenty-one-storey office block were approved in 2009. Wilkinson Eyre were again the architects. The bulk of this single-block scheme, which did not extend as far south as Buckle Street, was slightly mitigated by the formation of an open way through on the old line of Drum Street. However, after the financial crash of 2008 demand for office space fell away and the German HSH Nordbank, which had advanced millions for the project, persuaded the American developer to abandon the scheme. In 2012 Tishman Speyer sold the two-acre site to a joint venture formed by British Land and Barratt London, a subsidiary of the housebuilding firm, which staked its plans on Whitechapel’s residential gentrification. Allies and Morrison were brought in as architects and, despite misgivings expressed by CABE, a huge scheme was approved in 2013. It proposed six buildings of from six to twenty-six storeys for 463 residential units, of which thirty-five per cent were to be ‘affordable’ housing, and a hotel, with retail and office uses to the north on Whitechapel High Street and ‘public’ open space laid out by Vogt Landscape Ltd and Townshend Landscape Architects to include the diagonal way through as New Drum Street. Walsh Associates were structural engineers. Work began in 2014 and the first phase was completed in 2017. This comprised the southern parts, the nine-storey white-faced hotel flanked by residential blocks with brown-brick verticals and white spandrel panels, to the east Metropolitan (renamed Blakeney) Tower, of twenty-two storeys and with the ‘affordable’ housing, to the west Gateway (renamed Wiverton) Tower, twenty-five storeys with a ten-storey southern section. The 212-room hotel opened as the Clayton Hotel City of London in 2019. The second northern phase, part of which was to have been a twenty-seven-storey tower, was abandoned in 2018, there being a glut of flats on the market locally. Tower Hamlets rejected attempts to alter the Section 106 agreement that were deemed to put at risk the continuity of the affordable housing. At the time of writing the High Street frontage remains a cleared site behind hoardings.4 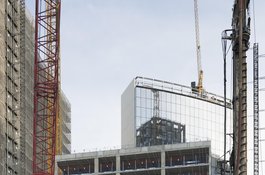 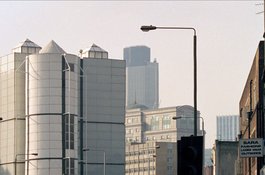