1988, office block for M. and C. Sandhu, plans approved in 2016 for replacement with a 21-storey residential and commercial block

A shophouse on the site of 26 Leman Street was connected to a sugarhouse on the south side of Camperdown Street until 1880, when it was taken over by Cohen Brothers, leather cutters. The freehold of Nos 26–30 was sold in 1885 along with that of other local buildings previously related to the sugar business. Rebuilding likely ensued such that Nos 28–30 were four storeys in height, with a taller corner shophouse at No. 26 that in 1901 housed a confectioners with sweets made on site by Italian migrants. These houses survived war damage and continued to be occupied until demolition in the 1980s. Pennine House, a seven-storey speculative office building, went up for M. and C. Sandhu in 1988 to designs by Abbott Howard, architects, that feature irregular chunky grey facets and flimsy red glazing bars. The demolition of Pennine House and its replacement with a twenty-one storey tower were approved in 2016. Designed by Nathaniel Lichfield & Partners, the intended building comprises commercial spaces on the ground to fourth floors and flats above.1 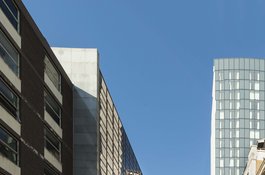 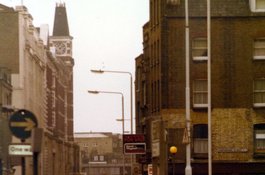