3 Dock Street
Back to Map

The pair of shophouses at 3­ and 5 Dock Street went up in the 1860s for George Edward Rose of the Black Horse public house, then adjoining to the south. The architect was probably Frederick Robert Beeston, who had taken a lease of the plot in 1859, undertaking to build two houses before conveying the property to Rose. No. 3 was a baker’s with a basement bakehouse, No. 5 an outfitters. Frank William Lersch, baker, had No. 3 by 1910 and the pair in the 1930s and 40s. The Battle of Cable Street of 4 October 1936 is commemorated by a red Tower Hamlets Environment Trust façade plaque. A well-known photograph from that day shows police clearing the way for a car carrying Fascists while anti- Fascists blocked the top end of Dock Street. The Sailors’ Home acquired the building around 1943 for a redevelopment that never transpired, instead No. 5’s blocked shopfront was adorned by a bas-relief panel depicting a sailor, while bakery use continued into the 1970s. Estate agency is a twenty-first century arrival.1 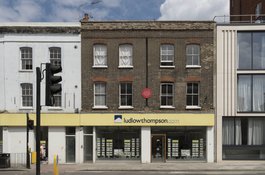