Former head office for the ‘E’ postal district, built by the Ministry of Public Building and Works in the 1960s.

Yoakley's Buildings (demolished)
Contributed by Survey of London on Oct. 20, 2020

Yoakley’s Buildings were ten one-room plan almshouses for elderly female Friends (Quakers). They were built around a court in 1800–1 on the north side of Mile End Green to the west of what is now Cavell Street. Michael Yoakley (1631–1708), a Margate mariner, shipowner and Quaker, a member of the Mile End meeting, held this and adjacent property opposite the Red Lion Farm by 1688, when he and Thomas Marden, a citizen cutler, granted a sixty-year lease to Richard Smith, a citizen carpenter. Yoakley also owned Hope Court on the north or Spitalfields side of Wentworth Street some of the houses of which he rebuilt as almshouses. After his death his trustees built Yoakley almshouses, which still stand, in Margate in 1709–10. Michael Yoakley’s Charity moved almswomen from Hope Court to part of their Mile End Green property in 1789, but finding the houses there unsuitable undertook the formation of the court of ten almshouses on what came to be called Raven Place off Raven Row. In 1839 Yoakley’s Buildings were leased to the National Guardian Institution for Families and Servants, a charity that had been set up by Elizabeth Fry, another Quaker philanthropist. The almshouses were occupied by subscribing retired female servants. They were rebuilt on a similar two-storey scale in 1884–6, only to be cleared around 1900 for the Post Office.1

Yoakley property extended to the west side of what is now Cavell Street and north to Whitechapel Road. Here John Hayward, the floorcloth and carpet manufacturer of Newington Causeway, established his floorcloth factory in the 1780s (see above). These premises were adapted for use by lead and glass merchants from the 1840s to the 1880s.2

The large concrete building which dominates the corner of Whitechapel Road and Cavell Street represents the last expression of postal activity on an extensive site which was once the centre of the Post Office’s operations in the East End. Before its closure in 2012, the East London Mail Centre (formerly known as the Eastern District Post Office) processed mail for the entire ‘E’ postal district, an area covering over 50 square miles from Chingford to Poplar, and was the eastern terminus of the Post Office Railway.1 During its 130-year association with the Post Office, the site has seen successive building projects prompted by rising workloads, technological developments and changing patterns of consumption. 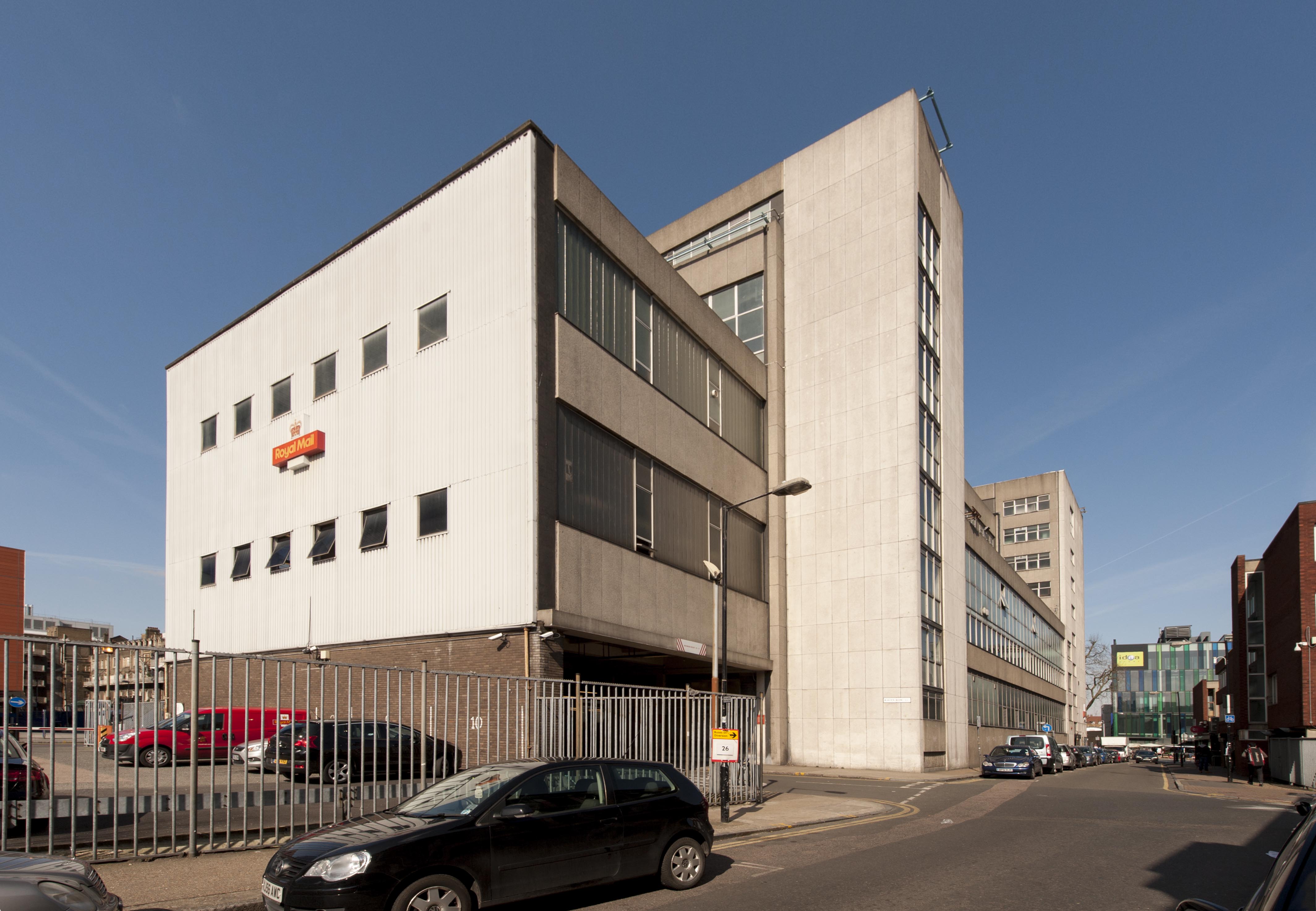 In the 1880s, the Eastern District Office had outgrown its premises due south at 226 Commercial Road and the Post Office sought a larger site for a new chief office with room for expansion. The offer of a lease from the Trustees of Yoakley’s Charity in 1883 brought a piece of former waste ground near the London Hospital, occupied by a paper-stainer’s shop and two cottages, to its attention. With a 50ft frontage extending south from Whitechapel Road to Raven Row, the site was generous in size and its situation ideal.2 In preference to taking a lease, the freehold for the ground was acquired in 1886 under the Post Office (Sites) Act of 1885 and the new post office built to the designs of Henry Tanner of the Office of Works.3 The building comprised a three- storey red-brick range with a public office fronting Whitechapel Road, and a single-storey sorting office at the rear. The main elevation of the public office was grand in character, with a central pedimented gable and round- arched windows on the third floor. In contrast, the sorting office presented a robust brick elevation to Cavell Street, with a plain staff entrance and large recessed windows.4 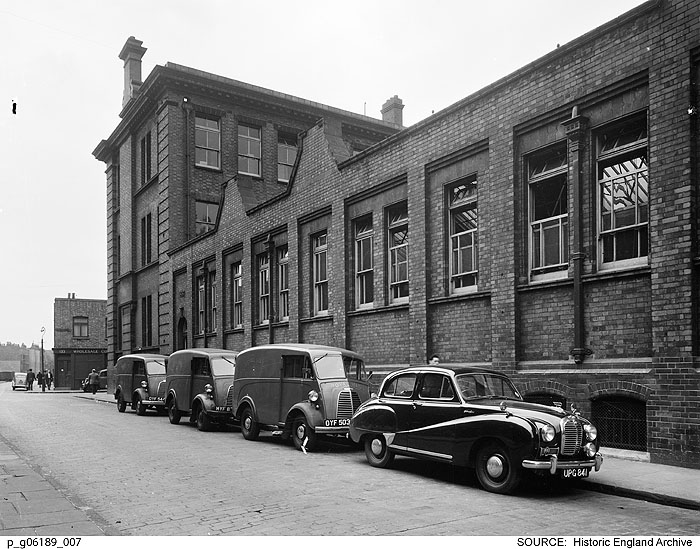 View of the sorting office range in Cavell Street of the Eastern District Post Office, looking towards the rear extension designed by Jasper Wager. Photographed in 1956. Reproduced by permission of the Historic England Archive.

Rapid growth in demand for postal services, which by 1899 had caused the number of letters processed at the Eastern District Office to increase twofold, sparked plans to extend the building to relieve ‘cramped’ working conditions.5 Ground to the west of the building was acquired and a significant extension built, replacing shops at 198–204 Whitechapel Road, 15–19 Raven Row and Raven Place, an alley lined with almshouses known as Yoakley’s Buildings, built in 1804 for elderly female servants.6 Designed by Jasper Wager of the Office of Works, the extension was sympathetic to the appearance of the earlier building and nearly doubled the floor area.7 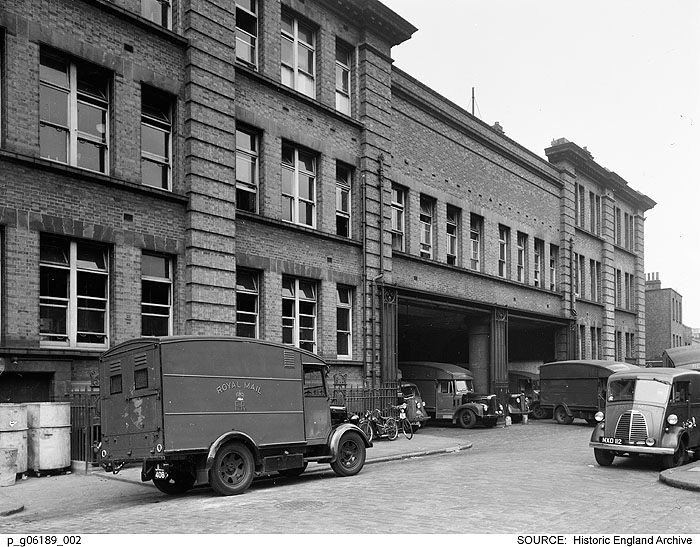 View of the van entrance to the Eastern District Post Office in 1956, part of the extension built to designs by Jasper Wager. Reproduced by permission of the Historic England Archive.

Further alterations followed with the construction of the Post Office Railway, or ‘Mail Rail’, to plans by William Slingo, engineer to the General Post Office, and Harley H. Dalrymple-Hay, consulting engineer. The underground electric railway was conceived in 1911 as a solution to the strain on London’s postal services caused by traffic congestion and a soaring volume of letters and parcels. It opened in 1927 to connect all of the capital’s major post offices, with its eastern terminus at Whitechapel. The line approaches from Liverpool Street, following the route of Whitechapel Road before curving southwards to meet the station platform and terminating in a loop to the south of Raven Row.8 Although the railway was closed in 2003, the infrastructure survives and has attracted proposals for reuse.

The introduction of mechanised postal sorting equipment in the 1930s led to new requirements for sorting offices and Whitechapel Road’s was probably considered unsuitable for modernisation.9 A scheme for the redevelopment of the site seems to have been in place by 1956, when plans indicate that the adaptation of the former clothing factory on the east side of Cavell Street for post-office use was considered, most likely as an interim measure. The acquisition of Nos 180–196 Whitechapel Road and the adjacent builder’s works provided a substantial site with a frontage of over 200ft.10 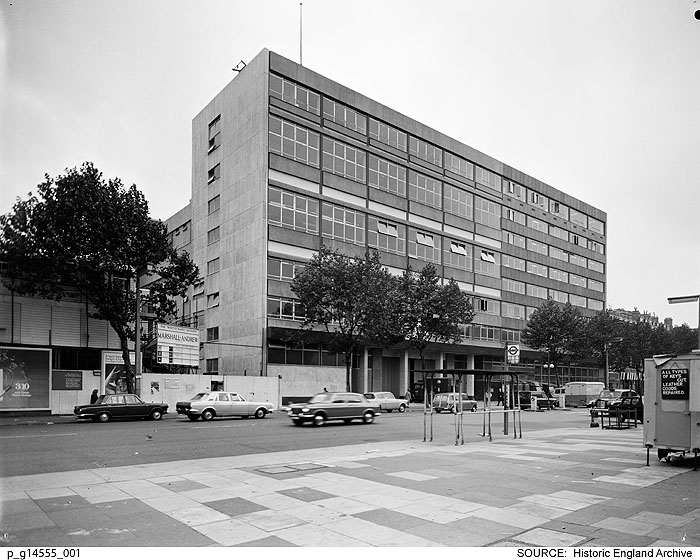 The new Eastern District Post Office, photographed in 1970. Reproduced by permission of the Historic England Archive.

The earlier buildings were demolished and the present Modernist building constructed in two phases by 1970.11 The first phase comprised the eight- storey west block, which housed a ground-floor public post office with administrative offices above.12 It was followed by the adjoining four- storey sorting office, which extends along Cavell Street to Raven Row. The drab utilitarian exterior was the product of a short-lived initiative to standardise the design of post office buildings, in a new house style showcased in a 1960s exhibition produced by the architects’ department of the Ministry of Public Building and Works, headed by Eric Bedford. The main elevation facing Whitechapel Road is divided into eleven bays clad with prefabricated-concrete panels and horizontal bands of glazing. The structural frame of the building is exposed on the ground floor by four concrete columns flanking the van entrance to the sorting office.13 The widely publicised ‘modular system’ was contrived as a ‘common approach’ to building design to make post offices ‘instantly recognisable in any setting’.14

The interior of the sorting office was laid out for a mechanised workflow, which processed four million items each week.15 The ground floor functioned as a loading yard, with large entrances for postal vans opening onto Whitechapel Road and Raven Row. A warren of chutes and conveyors enabled the flow of letters, parcels and mail bags between stages in the sorting process. A chain conveyor brought inward mail bags from the yard to the sorting floors, to be processed by specialised machinery. The first, second and third floors of the sorting office comprised open-plan rooms with continuous steel-framed windows on each exterior wall to maximise light provision. Offices for inspectors were formed from light partitions. On the third floor, inward mail bags were opened and their contents sorted by size in the segregator machine. Small items were organised by stamp and postmarked in the automatic letter facer.16 The conveyor system fed items directly to the packet sorting machine, located on a mezzanine above the expanse of letter and parcel enclosures in the first-floor sorting hall. From there, the post was organised into outward mail bags and transported via spiral chutes to the ground floor loading bays or, if destined for the Post Office Railway, to the basement. The Eastern District relied on over 2,000 postal staff working through the day and night, and a lounge, games room and bar were provided on the fourth floor.17

The East London Mail Centre did not survive plans announced in 2000 to modernise London’s sorting system and, at the time of writing (2016), its former offices are occupied by tenants and only a modest delivery desk continues to operate. As the site has been earmarked for redevelopment by Tower Hamlets Council, the building is likely to be demolished.18

Whitechapel Sorting Office was a terminus for Mail Rail, a unique underground railway, which stretched all the way between Whitechapel and Paddington via Farringdon. It was a completely separate system to the London Underground and used tiny electric trains of the right size to carry parcels and letters.

The system is no longer in use and has been mothballed but plans are in place to reopen the line for tourists as a museum in 2017. 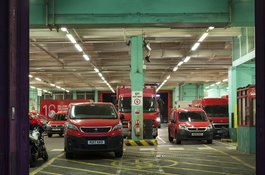 East London Mail Centre, view into garage from the east in late 2018
Contributed by Derek Kendall 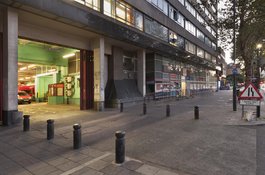 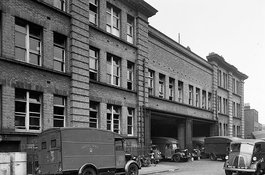 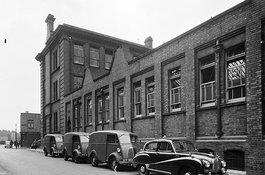 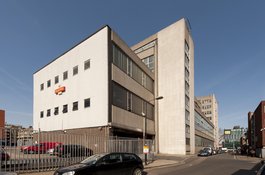 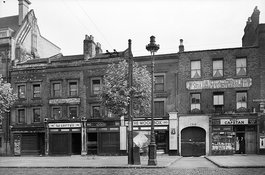 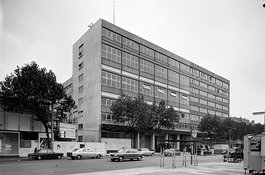 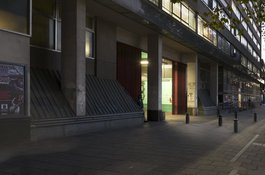 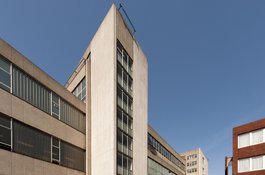 Film of the 'Mail Rail' that terminated at Whitechapel, 1932

The underground mail rail, which ran until 2003, seen in a newsreel from 1932, five years after it opened.

The Post Office Museum, at Mount Pleasant, Clerkenwell, is about to reopen (July 2017) and visitors will be able to ride a section of the MailRail that ran on a loop underground from Whitechapel to Paddington between 1927 and 2003. https://postalmuseum.org/

Contributed by Survey of London on June 5, 2017