Outpatients Annexe
Back to Map

The former Outpatients Annexe of the Royal London Hospital stands at the north-east corner of the junction between New Road and Stepney Way. This substantial block was built in 1935–6 to designs by Adams, Holden & Pearson to provide a centre for the hospital’s Department of Physical Medicine and a newly established School of Physiotherapy. This school benefited from the closure of the Westminster Hospital’s School of Massage and Medical Gymnastics, which transferred staff and students to the London Hospital’s ‘large and well-equipped’ new facilities. In the 1930s the department offered a variety of treatments, including electrotherapy, gymnastics, hydrotherapy and massage, and performed electrodiagnosis for the entire hospital.1 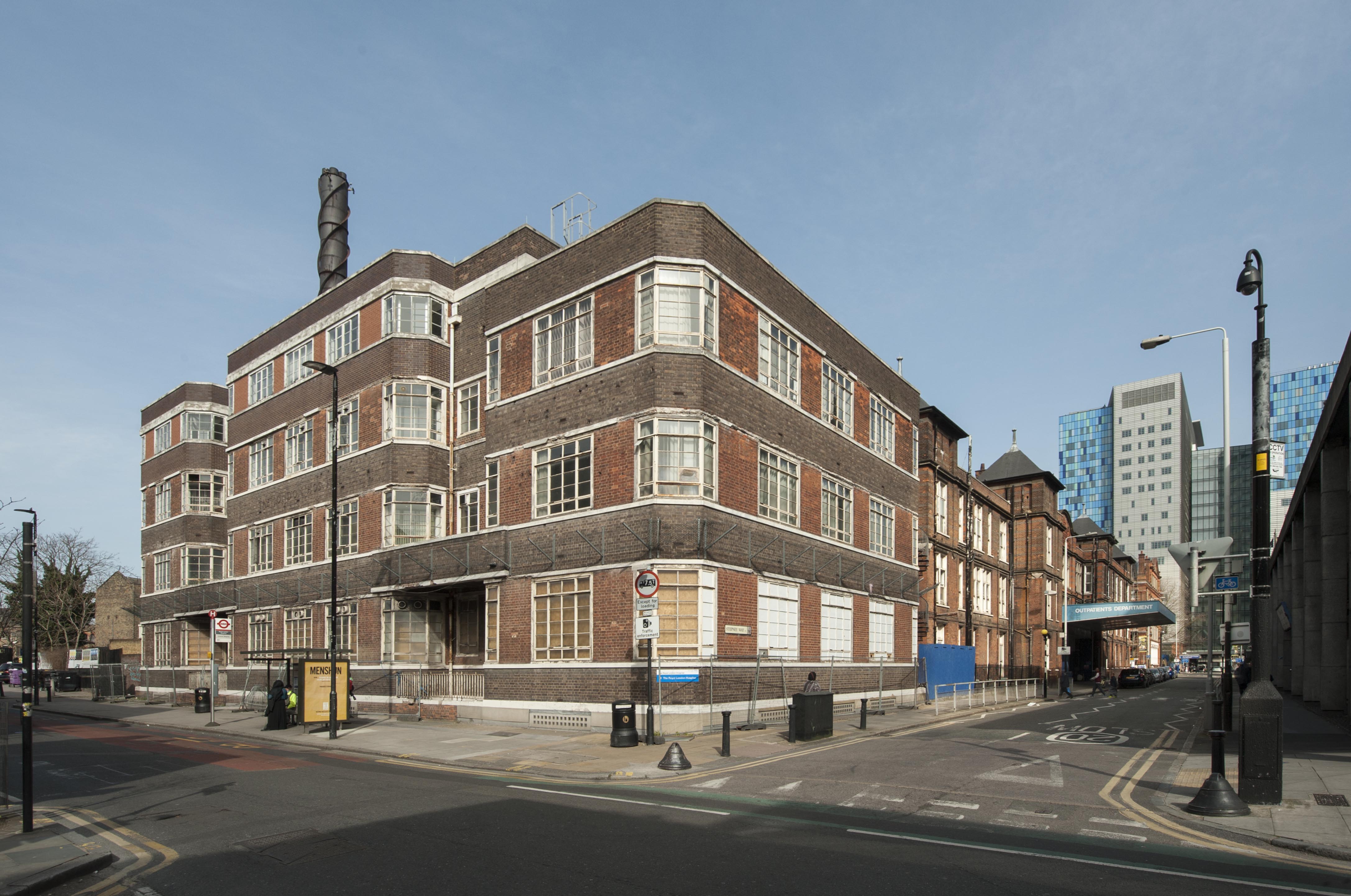 The fomer Outpatients Annexe in Stepney Way, photographed from the south-west by Derek Kendall in 2016.

This diverse department traced its roots to the beginning of the twentieth century, when the construction of the Outpatients Department coincided with growing medical interest in physiotherapy. Electrical, bath and massage suites had been installed in the new building on its completion in 1903. A few years later, the massage unit moved to vacant rooms in the basement of the Alexandra Wing that had previously been occupied by the surgical outpatients’ department. At this time, nurses were trained in Swedish massage and gymnastics under the supervision of Professor Koch, judged to be ‘an extremely skilled manipulator’ despite his lack of formal training.2 Koch’s first students were taught with Swedish textbooks and qualified as nurse masseuses, positions of elevated status in the nursing staff. Electrical, bath and massage therapies at the hospital were united in 1911 at the instigation of Dr Robert Stanton Woods (later knighted for his treatment of George V in 1928), and the Department of Physical Medicine was formally established six years later.3

Despite these steps towards administrative coherence, the various treatments under the newly established department remained scattered around the hospital. Plans to unite the department in a new building were delayed by the First World War and subsequent financial constraints. Several designs for a massage and electrical department were produced in the 1920s by J. G. Oatley, the hospital’s surveyor. From the outset, the site at the west end of the Outpatients Department was earmarked for the building. This piece of ground fronting New Road was occupied by early nineteenth-century terraced houses and a purpose-built house for the hospital’s receiving room officers. Oatley’s estimate of £27,000 eclipsed a gift towards the cost of the building from Sir Harry Mallaby-Deeley, 1st Bt. Despite proposals to pare down Oatley’s plans or construct the building in stages as funds permitted, the scheme was deferred.4 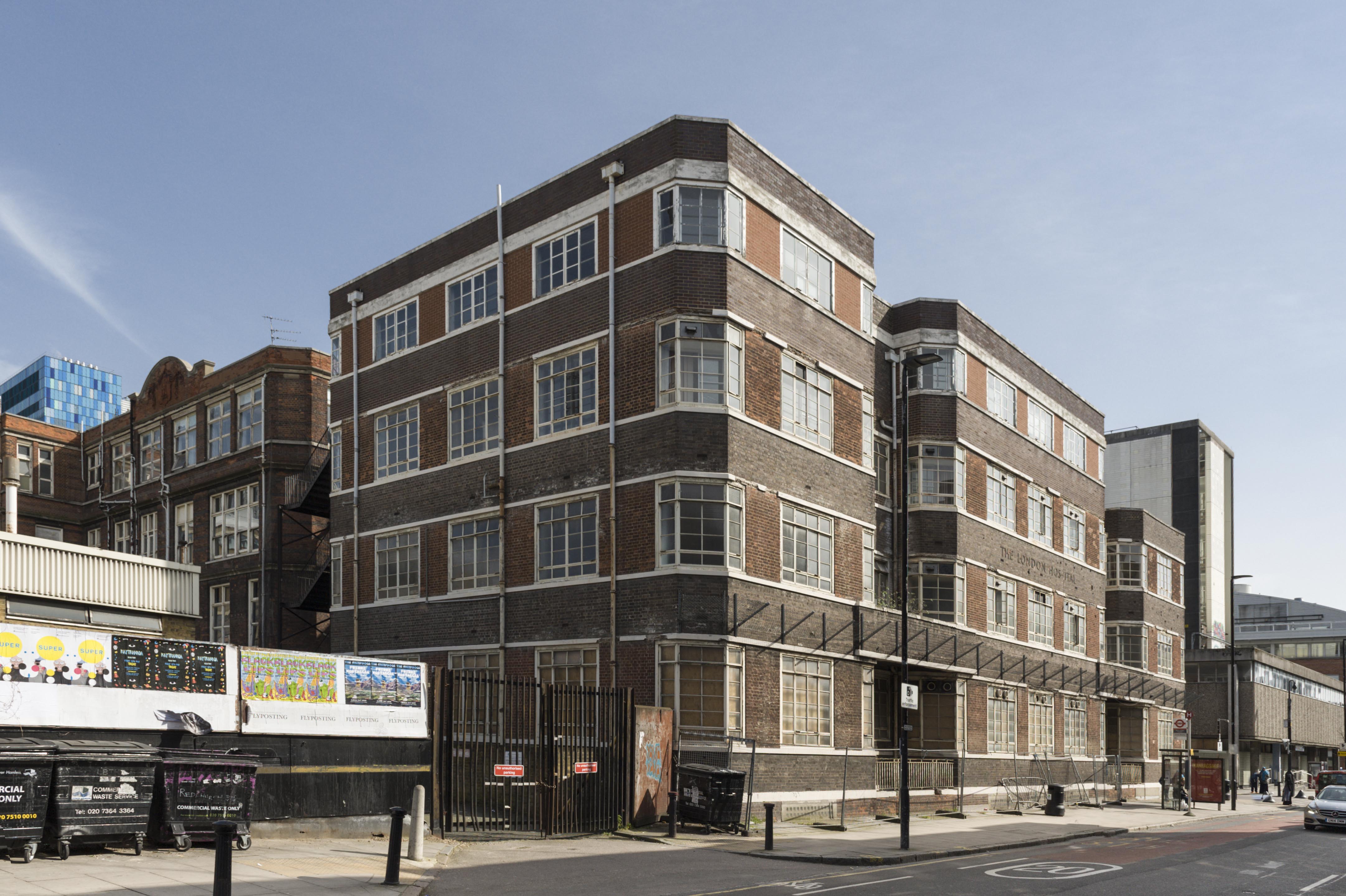 The former Outpatients Annexe from the north-east, photographed by Derek Kendall in 2016.

The pressing need to unify the Department of Physical Medicine led to the renewal of building plans in 1934. By this time, the transferral of the receiving room officers to the Residents’ Hostel averted the complication of displacing staff. The House Committee recollected that Oatley’s costly design was ‘possibly unnecessarily large and elaborate’, and ventured to select a new architect.5 A proposal to invite three architects to compete was rejected as ‘very cumbersome’, and the committee decided to approach an architectural firm with hospital experience.6 Investigations were led by a building sub- committee that included Sir W. H. Goschen, Chairman of the House Committee, and Sir Albert Stern, banker, amongst its four members. Goschen’s enquiries encouraged him to recommend Collcutt & Hamp and Adams, Holden & Pearson as suitable practices ‘well known for their hospital work’. The latter firm was also endorsed by H. A. Sandford, a consulting engineer, and was invited to draw up plans.7 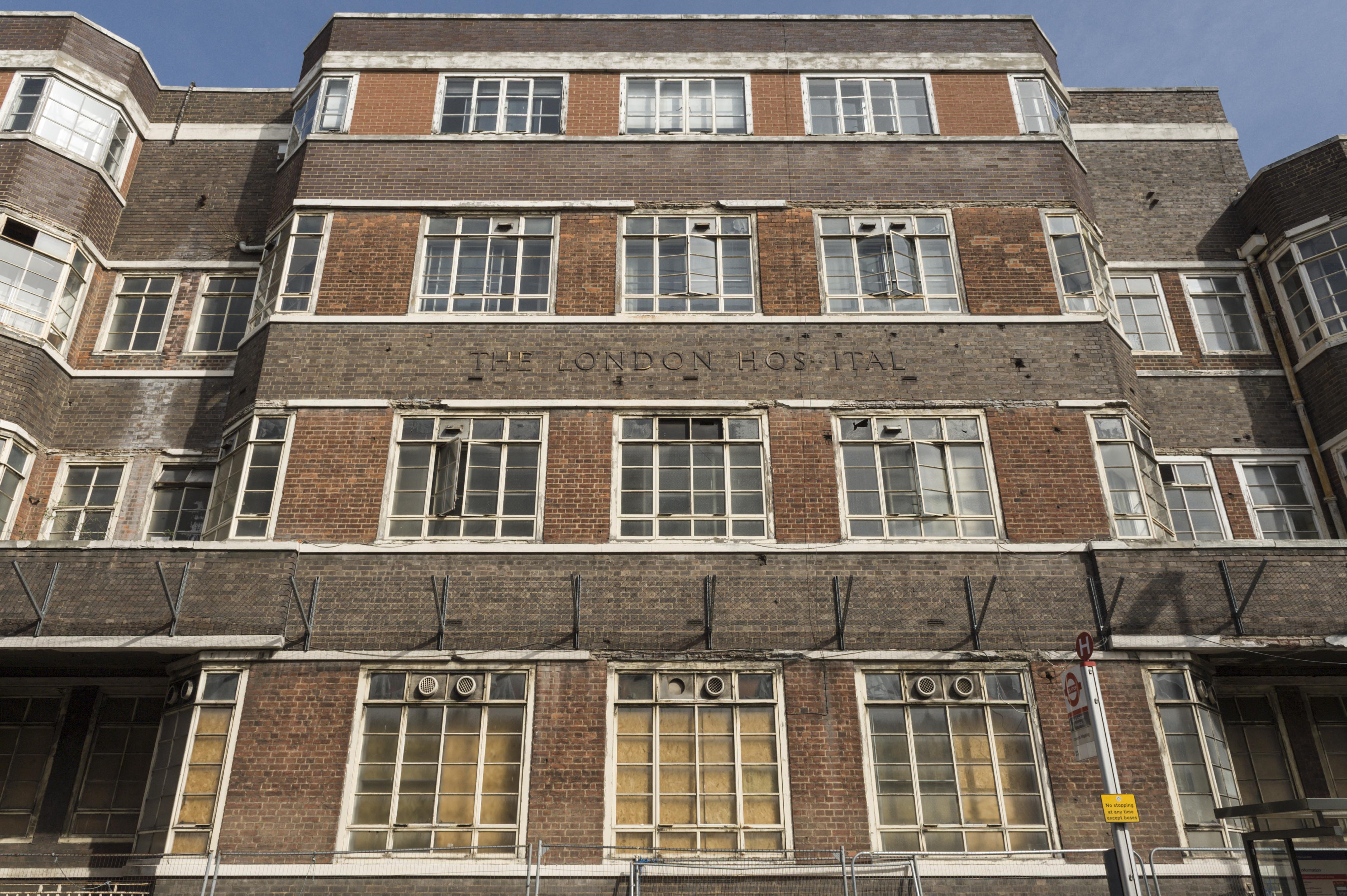 The west elevation of the former Outpatients Annexe, photographed by Derek Kendall in 2016.

Despite the rejection of Oatley’s earlier plans on the grounds of extravagance, the renewed scheme benefitted from an enlarged budget. The hospital’s ambitions for the Department of Physical Medicine had also augmented under the influence of Stern, who had visited similar departments in rival hospitals in 1930. He determined that the London Hospital was ‘far behind other hospitals’ not only in the need for an adequate massage and electrical department, but in its lack of a school of massage. Stern consequently pressed for an additional storey to be allocated to teaching. Stern’s insights were supplemented by Dr Woods’s advice concerning his department’s requirements.8

The new design was probably overseen by Lionel G. Pearson, who in July 1935 presented a paper before the Royal Sanitary Institute on ‘The Hospital of the Future’. Pearson envisaged functional hospital buildings planned along Modernist lines, or ‘resembling an athlete trained to the last ounce of flesh’.9 He promoted construction in steel, brick and concrete, large metal-framed windows, and flat roofs to provide useable spaces and the potential for upwards extension. Many of these elements were incorporated in his design for the London Hospital's Department of Physical Medicine, which possesses a bulky, functional appearance with chamfered corners, metal-framed windows, and a flat roof behind a plain parapet wall. Its exterior is enveloped by plain brick bands separated by thick concrete strings, a motif repeated elsewhere by Adams, Holden & Pearson in the 1930s, such as at the Westbury Court flats above Clapham South tube station.10 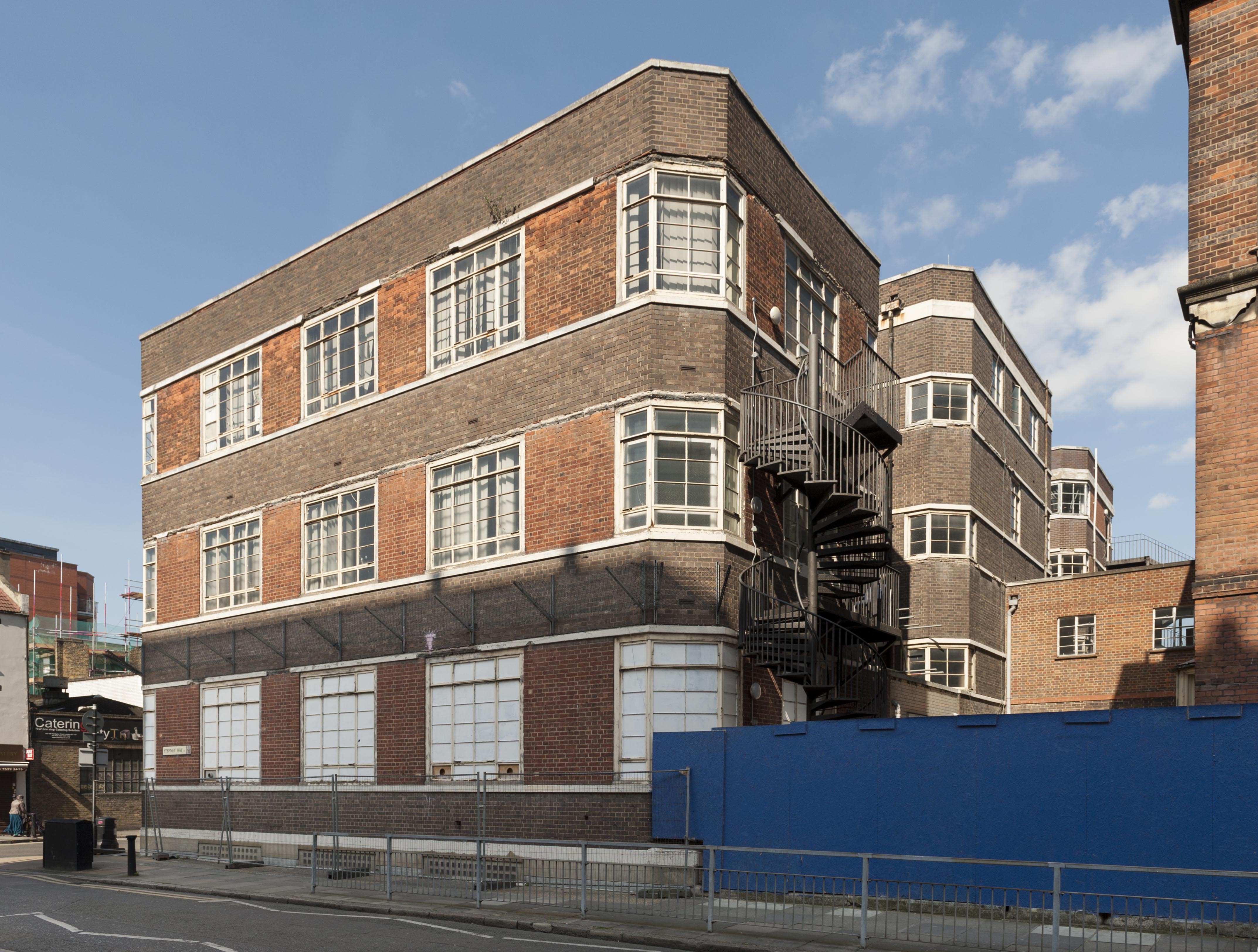 View of the former Outpatients Department from Stepney Way, photographed by Derek Kendall in 2016.

A tender of £34,484 from Prestige & Co. was accepted for the building in October 1935, and the Trussed Concrete Steel Co. were engaged as reinforced- concrete engineers. Construction was completed in the following autumn to unite the Department of Physical Medicine and provide a base for a School of Physiotherapy. The final design squeezed treatment and teaching rooms into an E-shaped four-storey block with a basement. The building was accessed directly from the west end of the Outpatients Department at basement and ground-floor levels. A basement subway provided access to a hydrotherapy pool, staff and service rooms. On the ground floor, a corridor opened into an entrance lobby with a staircase and bed lift. A central waiting hall was bounded to the west by a suite of medical staff rooms overlooking New Road. Large treatment rooms for women and men were positioned at the ends of the building, each adjacent to changing rooms and top-lit spaces for Swedish exercises. This internal arrangement was repeated on the first floor, with the exception that its treatment rooms were divided into cubicles for electrical and light therapies. The second floor comprised the School of Physiotherapy, which boasted a large top-lit gymnasium at its south end. A small library was positioned next to the main staircase, which opened into a locker room. The school contained three classrooms and a series of rooms for the teaching staff and nurses. A student common room, an afterthought devised by Pearson, was built on the third floor. The adjacent flat roof provided additional space for exercises, including respiration classes for asthmatics. It was also a popular sunbathing spot amongst students, though not without the risk of ‘soot-speckled uniforms’.11

The absence of a street entrance accounts for the building’s designation as the Outpatients Annexe. Post-war alterations include a roof extension constructed in conformity with the block’s distinctive striped exterior. By the 1970s, the basement contained the hospital’s medical records department. The building has been vacant since the hospital moved to new premises in 2012, and redevelopment seems likely.12 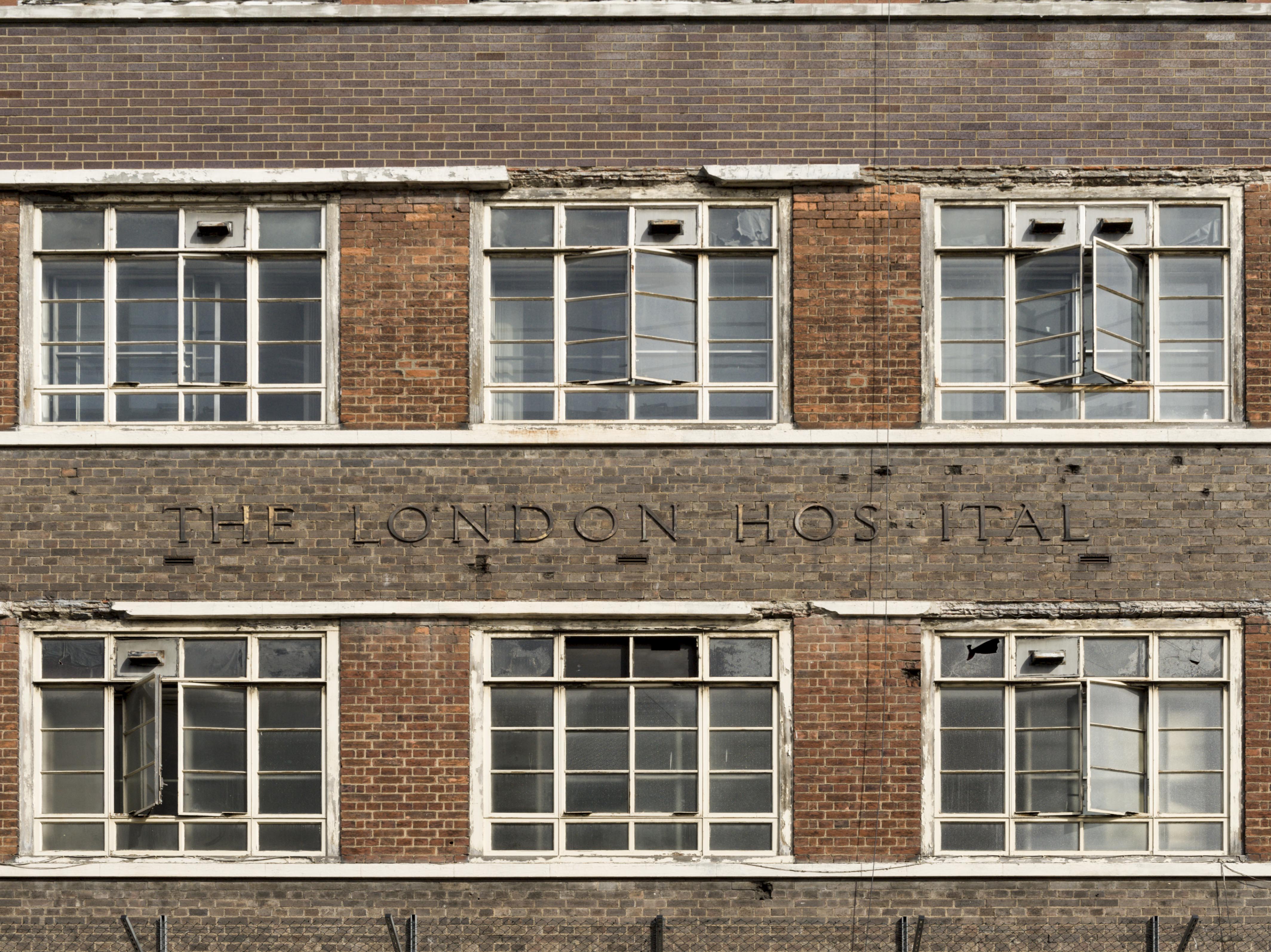 The west elevation of the former Outpatients Annexe, photographed by Derek Kendall in 2016.

Recollections of a student at the London Hospital School of Physiotherapy, 1957–60
Contributed by Amy Spencer, Survey of London on Feb. 8, 2017

Long starched overalls, high to the neck, tied with a brown tie, showing only inches of ankle. Endless buttons – a nightmare if you were late for inspection.

Carrying Gray’s home on the train – plus a few forbidden bones to study – eyed by nervous commuters.1

Late morning dissections in the medical school – followed by lunch.

Tea – hunks of French bread coated with butter, and anything else we could find to eat. Trying to find a space on the roof to sunbathe. A blissful thirty minutes. Result – very little sunshine and soot-speckled uniforms.

Waiting for exam results – hoping to stay with your own year. Results – a training which left us with a sense of purpose and capable of coping with most problems which would come our way. To new students – don’t give up you have a wonderful future. 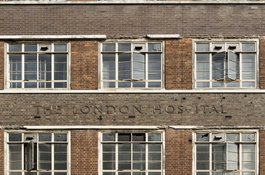 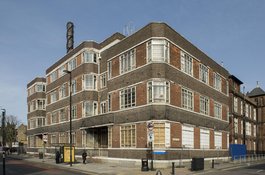 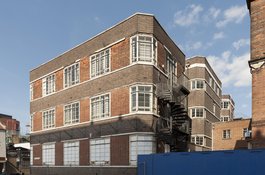 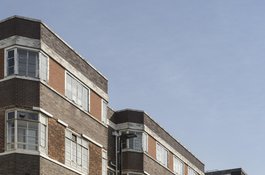 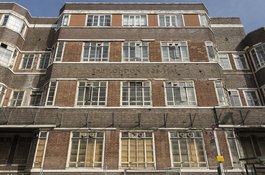 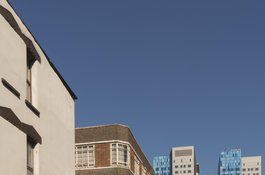