Dental Hospital and Institute of Dentistry
Back to Map

The area bounded by Stepney Way, Turner Street, Newark Street and New Road is dominated by the former London Hospital Dental Institute and Students’ Union, built in 1962–5 to designs by Stephen Statham & Associates, a little-known architectural practice. This assertive block was the outcome of an ambitious plan to unite and extend the hospital’s dental treatment, education and research facilities. Between 1945 and 1952, the dental department and its associated school tripled in size. This substantial block south of the Outpatients Department was designed to accommodate 130,000 dental patients each year and to permit a doubling of the annual admission of dentistry students to 50. A large and highly specialized Dental Institute was accompanied by a separate Students’ Union at the east end of the building. At the time of writing (August 2017), the Dental Institute has fallen into disuse, yet the adjoining Students’ Union continues as Barts and the London Students’ Association.1 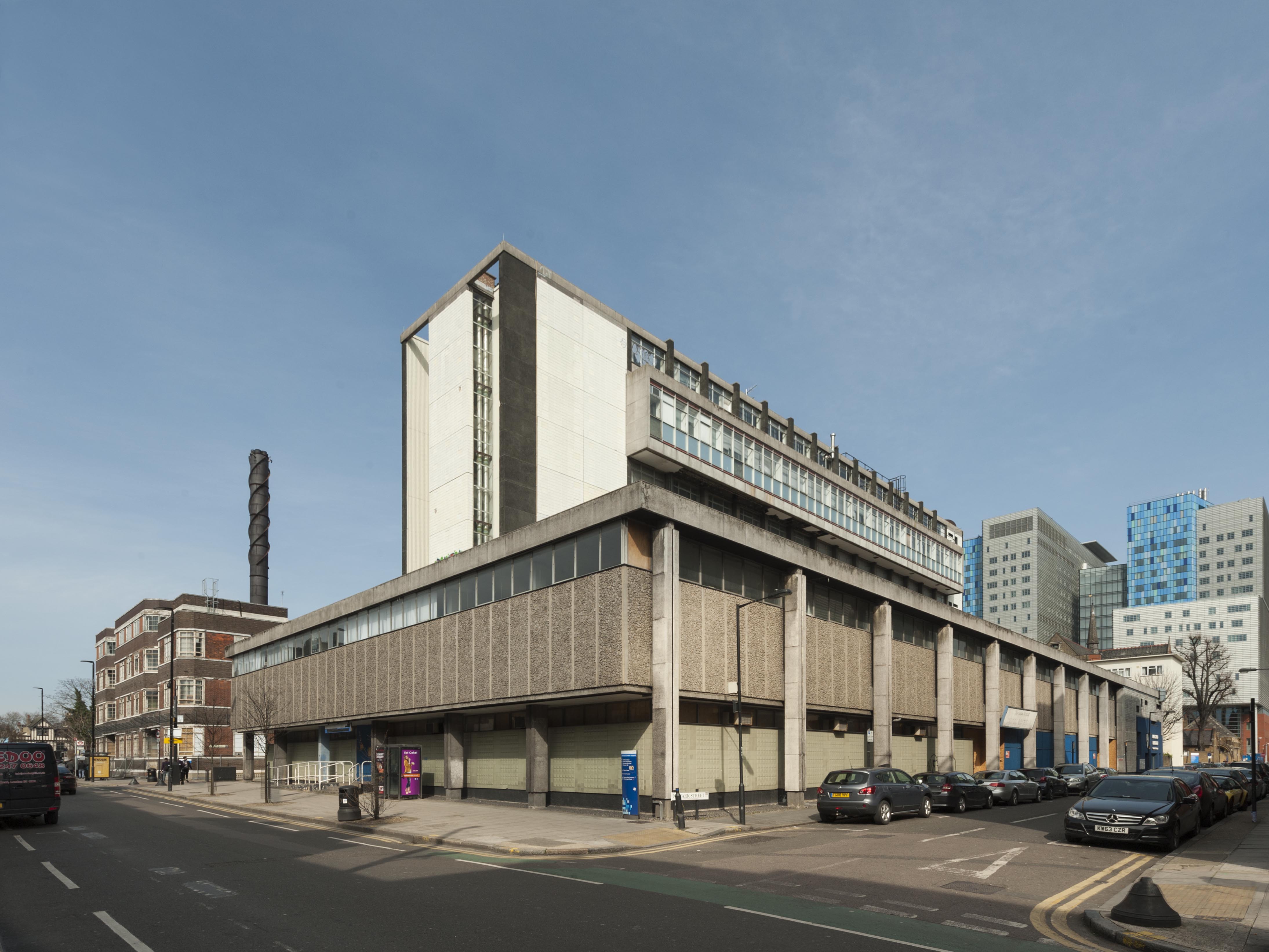 The London Hospital Dental Institute and Students’ Union from the south-west, photographed by Derek Kendall in 2016.

The planning of the block spanned approximately five years, owing partly to lengthy consultations with both the Ministry of Health and the University Grants Committee (UGC), which financed the scheme jointly. The prolonged evolution of its design may also be attributed to the building committee led by the hospital and the medical college. An initial design was submitted to the Ministry and UGC in 1957, yet the committee insisted on layout alterations after its approval two years later. The final design was developed in association with Oscar Faber & Partners, consulting engineers, and John Liversedge & Associates, structural engineers. The block was constructed in 1962–5 by Francis Jackson Contractors Ltd and a number of subcontractors.2

The Dental Institute and Students’ Union replaced three rows of early nineteenth-century terraced houses at 52–64 New Road, 1–23 Newark Street and 2–26 Stepney Way. It is a bulky concrete block formed of a podium crowned by a five-storey tower; a discordant configuration influenced by LCC restrictions on height and floor area. The podium engulfs the entire site, while the tower is limited to a narrow rectangular footprint with cantilevered projections on the third and fifth floors. The reinforced-concrete frame is partly exposed and the exterior walls clad with tiles and concrete panels. The south elevation of the Students’ Association in Newark Street is marked by window openings arranged with playful irregularity, while its north entrance facing Stepney Way was originally clad with marble.3 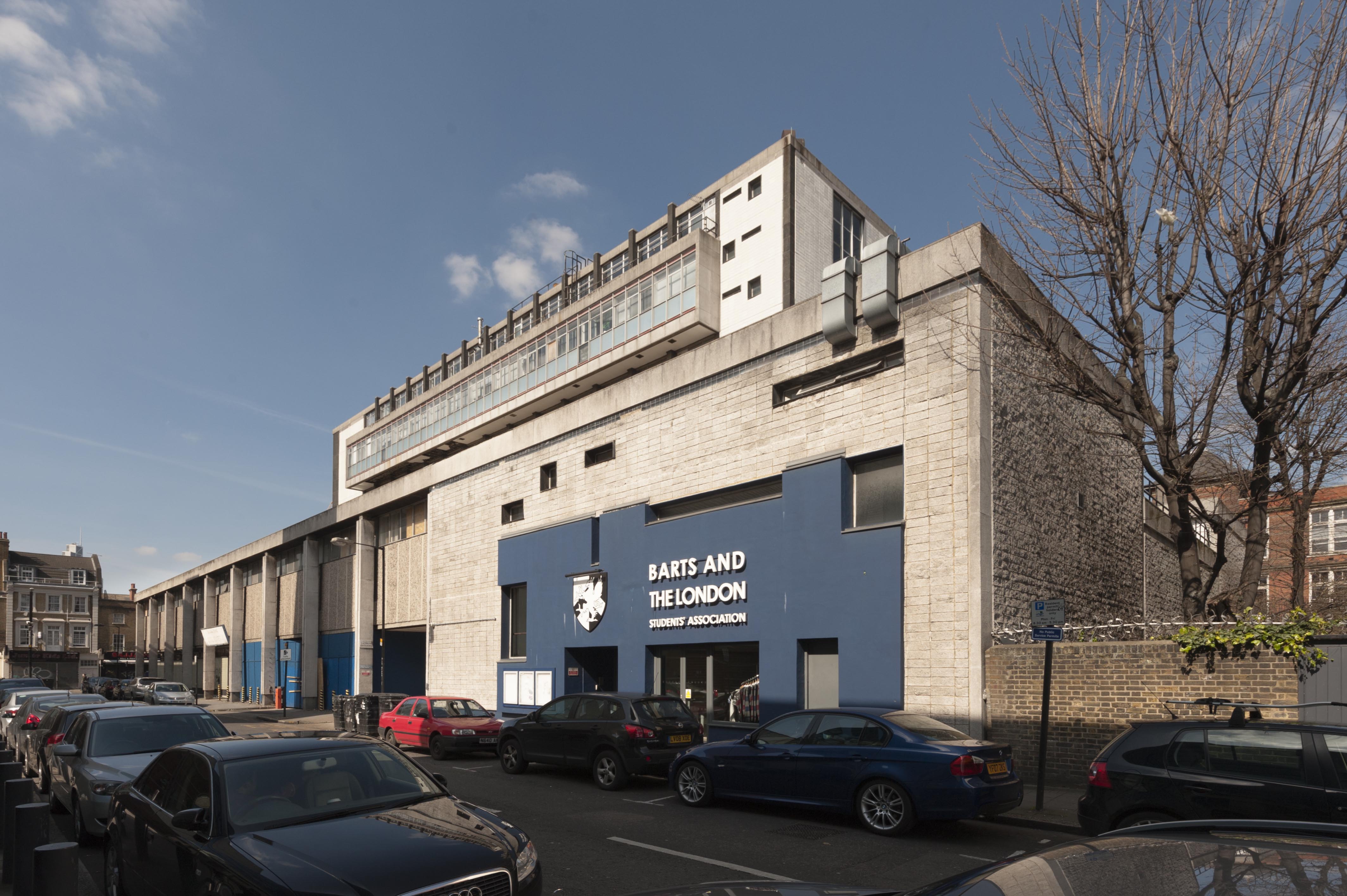 The south elevation of the Dental Institute and the Students' Union in Newark Street, photographed by Derek Kendall in 2016.

The block was divided into the Dental Institute west and the Students’ Union east, separated on the ground floor by a central car park adjacent to staff common rooms and lockers. The Students’ Union was limited to three storeys and a basement compressed into the east end of the podium. A large dining room occupied the centre of the ground floor, while the upper floors contained three common rooms, and top-lit music and games rooms. The internal configuration of the Dental Institute was highly specialized thanks to collaboration between the architects and building committee. After its completion in 1965, the institute was described triumphantly as ‘the manifestation of a philosophy of dental treatment and education translated into practical building terms’.4 An engineering workshop, a ‘hot’ laboratory and service plants were confined to the basement. The Dental Institute originally lacked a street entrance, with its principal doorway for staff and patients located next to the ground-floor car park and accessed via footpaths from Stepney Way and Newark Street. The entrance foyer was flanked by the Oral Surgery and Radiology Departments, each divided into suites by light partitions. The arrangement of the first floor was a focus for the architects and the building committee, who studiously tested models and prototypes. The result was a central core comprising a sterilising department, a waiting area, surgeries and offices, partially encircled by a treatment area containing 92 dental chairs for patients. These were arranged in four-bay clusters separated by low screens to ensure privacy.5 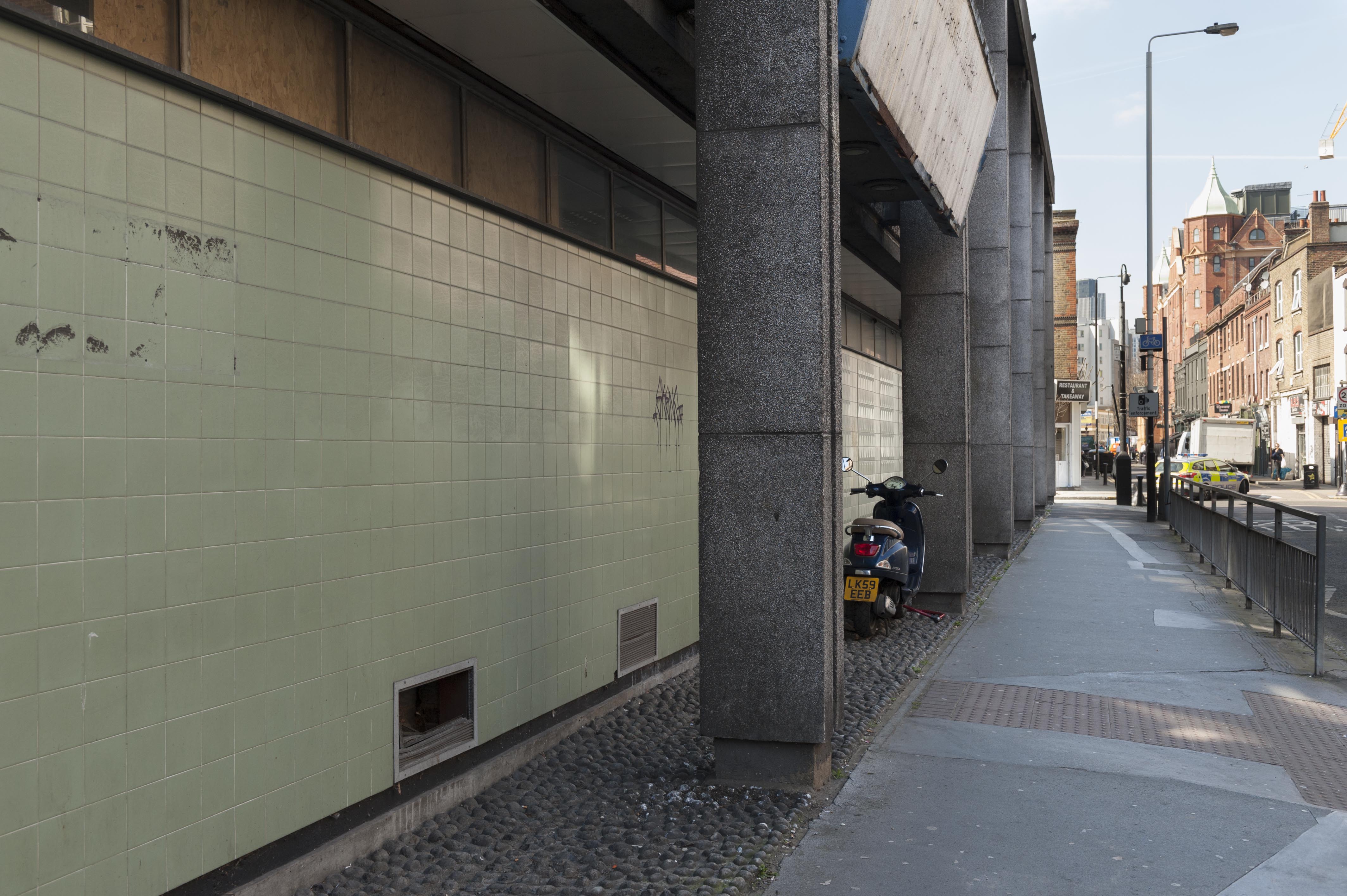 The north elevation of the Dental Institute in Stepney Way, photographed by Derek Kendall in 2016.

The narrow upper floors of the five-storey tower were largely assigned to dental education and research. The second floor contained a lecture theatre, a photographic unit and offices, while a Department of Child Dental Health was installed on the third floor. Each level followed a similar layout, with central corridors terminating east and west in lobbies containing stairs and lifts. Specialized rooms formed by light partitions flanked the corridors, benefitting from exterior glazing. An exception was the fourth-floor teaching department, which, by the inclusion of a south-facing corridor, secured a seminar room, a laboratory, and a clinic devoted to practising dental techniques on ‘phantom heads’, or mannequins. The fifth and sixth floors of the building were dedicated to research and included an animal testing facility.6

It was later remarked that when the Dental Institute opened in September 1965, the department ‘instantly foamed up and filled every corner of the building’.7 A series of alterations followed, including the insertion of a public street entrance in New Road. Plans were produced in 1978 to simplify the first-floor treatment area by replacing the grouped dental chairs with single fitted cubicles. Since the Institute of Dentistry transferred to the hospital’s newly renovated Alexandra Wing in 2014, the west end of the block has lapsed into disuse and the site has been earmarked for redevelopment.8 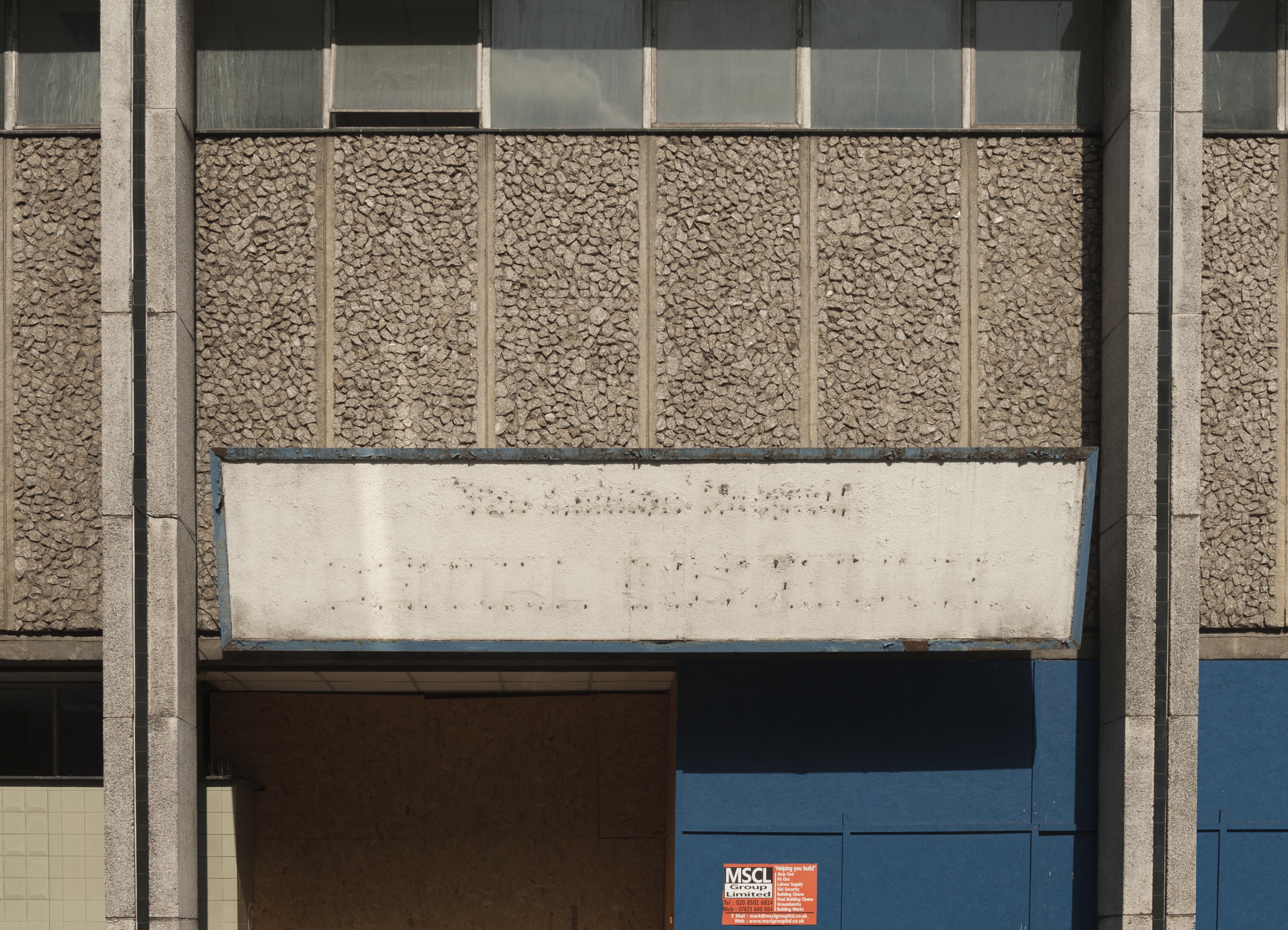 Former entrance to the Dental Institute in Newark Street, photographed by Derek Kendall in 2016.

Stepney Way - some early history
Contributed by Survey of London on Aug. 18, 2020

Stepney Way follows the course of the footpath that linked Whitechapel’s field gate to St Dunstan’s Stepney. It was formerly known as Oxford Street, perhaps in compliment to Brasenose College, which held the advowsons of both Whitechapel and Stepney from 1708. Groups of houses on the street were called Hereford Terrace, Wellington Place, Raven Terrace and Hampshire Place till 1867. The present name was introduced in 1938.1

Development this far north on the London Hospital's estate was restricted by the concern attached to preserving air circulation around the hospital, confining building plots to the street’s west and east ends. The south side of the stretch between New Road and Turner Street was built up between 1807 and 1811, when the first leases for completed buildings were granted. Henry Stevens took Nos 12–22, while smaller lots of one or two dwellings went to John Henry Frith, Benjamin Cornish and Hannah Wilson. On the north side, Robert Watson completed four terraced houses at Nos 9–15, while Robert Shearsmith followed with another four at Nos 17–23 in 1815. Nos 1–7 were taken in smaller lots of one or two dwellings between 1814 and 1819.2

The eastern stretch of Stepney Way on the hospital estate was developed in the 1820s. The Brewers’ Company leased ground for a row of almshouses that went up in 1825–6 to face St Philip’s Church across open ground. The British Oak public house, next door to the east on the south side of Stepney Way at No. 28, was taken on a building lease by Elizabeth Humphreys in 1828. Adjoining ground for a row of twelve houses had gone to John Symonds, John Jacobs, James Hellyer and Spencer Lambert between 1823 and 1826. These stood opposite two rows of eight houses between East Mount Street and Raven Street, also erected in the 1820s. The block east of Milward Street was sold in 1875 to the East London Railway Company, which demolished some houses for its railway cutting. The Oxford Arms occupied No. 43 at the corner of Milward Street.

From the 1890s the hospital acquired sites along Stepney Way for the rebuilding programme overseen by Rowland Plumbe (see p.xx). Only Nos 2–26 (south side west) and 37–49 (north side east) survived into the 1960s. No. 20 was the home of Isaac Sharp (1879–1965), a trade-union secretary and local councillor, and Martha, née Belinsky (1881–1967), both Russian Jewish immigrants. Their son, Eric Sharp (1916–1994), was born here. His business career, ranging from Monsanto Ltd to Cable and Wireless, led to a peerage as Baron Sharp of Grimsdyke under Margaret Thatcher.3

Pector's restaurant at 64 New Road
Contributed by RozinaCowan on Oct. 31, 2018

My Booba and Zaida had a restaurant at this address. Their names were Chava and Usher Pector My Dad came into the restaurant one day, saw my Mum and the rest is history.

I was born in 1949. My family lived at 18 Stepney Way and had been there from the time it was called Oxford Street. The matriarch of the family was my Booba, Sarah Steppel. My mother, her daughter Hetty, had married my father, Eugen Grunwald, in 1942. He had arrived in the UK from Czechoslovakia on 4th August, 1939, armed with a work permit. He had trained as a chef and the work permit had been granted by Feld's Restaurant on Whitechapel Road. He had lodged with my Booba and had then married the landlady's daughter. They stayed living with my Booba, who ruled the roost until her death in 1970. I attended Fairclough Street (later Henriques Street) Infant School and then followed my sister, Frances, to Rutland Street Primary School. Our shul was New Road Synagogue, where I was barmitzvahed in 1962. The family shul had been Dunk Street, but that had been bombed during the war. I was lucky enough, thanks to an inspirational Head Teacher at Rutland Street, Mrs Giles, to get a scholarship to City of London School. In 1960 or 61 my family moved to a small block of flats in Myrdle Street, when 18 Stepney Way was demolished to make room for the Dental School. I remained living there until I qualified at the Bar in 1972. My parents remained there until they died, my father in 1998 and my mother in 2002. I have many fond recollections of the area. 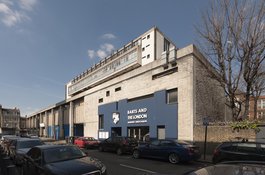 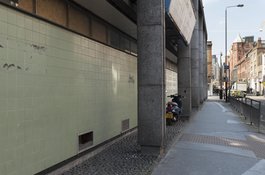 Exposed concrete frame of the Dental Hospital and Institute of Dentistry, 2016
Contributed by Derek Kendall 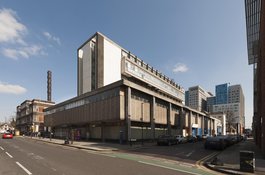 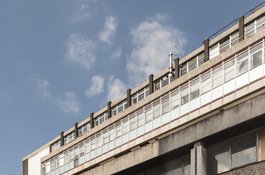 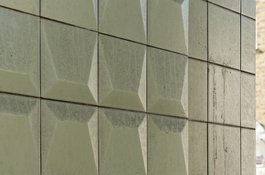 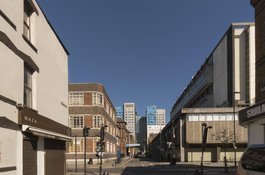 View from Fieldgate Street of the Dental Block and Students' Union, the Outpatients Annexe and the Royal London Hospital, 2017
Contributed by Derek Kendall 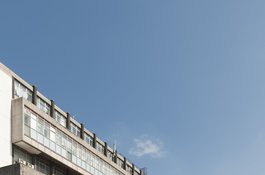 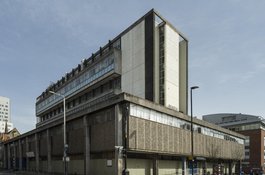 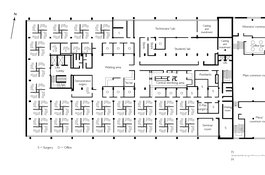 Dental Hospital and Institute of Dentistry, upper-storey plan as built - drawing by Helen Jones
Contributed by Survey of London