Magenta House
Back to Map

From Black Lion House to Magenta House, 45-85 Whitechapel Road and Greatorex Street
Contributed by Survey of London on March 29, 2017

The Whitechapel Road frontage that was formerly numbered Nos 31–95 (as far east as Greatorex Street) is unified by a story of post-war redevelopment characterised by public- and private-sector collaboration and conflict. A minor event, but a determinant of what was to follow, was the insertion into the middle of a large bombsite gap at the centre of this stretch of a modest three-storey commercial block, put up around 1960 at Nos 57–59 immediately east of the south end of King’s Arms Court. Size Yard endured and towards its end in the 1960s was briefly known as Jubilee Square. Further east Nos 69–95 and Black Lion Yard had been spared, the latter continuing as the centre of the Jewish jewellery trade. On the north side of what had been Trumpet Yard there was a late nineteenth-century two-storey stable building that had become a clothing factory and been raised a storey as 83A Whitechapel Road. To its east the Greatorex Street frontage was another bombsite.1

Extensive slum-clearance and council-house building plans of the early 1960s that centred on Old Montague Street included Black Lion Yard and were confirmed by the Greater London Council (GLC) in 1967. This gave rise to organised resistance. A petition from the Black Lion Yard Jewellers’ Association gained more than 1,000 signatures (many of them said to be those of visiting tourists) and argued the uniqueness of the market, for the style and nature of the jewellery, and, it having Jewish traditions, for trading on Sundays. These traditions were emphasised, but the place was thought by others to be a haunt of fences. In fact the yard’s occupants in the mid 1960s were mixed, with as many Muslim/Asian as Jewish names: Mohammed Zaman Qureshi (a hairdresser), Mohammed Aslam, Nathan Silver, Ava Choudhury, Solomon Granatt, Morris Elgrod, Mudabbir Hussain (halal meat shop), Leon Elgrod, Bessie Gluckstein, Mohammed Anwar (Karachi Sweets), Ghulan Mohammed Khan, Mohammed Najeeb, Netty Levine, Abdul Matin (Sylhet Stores), Mohammed Anwar, Fishberg Ltd, Maurice Levrant (Chairman of the Association, initiator of the petition and owner of  one of the seven remaining jewellers’ shops). Only 22 people were identified as living above the shops. There was an inquiry into the clearance orders after which Major Eric McArthur, Secretary of the East London Federation of Industry and Commerce, floated the idea of adapting the yard to be a food market for the many ‘Pakistanis’ working at the London Hospital and living on Old Montague Street. This was opposed by the Jewellers Association, as well as by the Race Relations Board, which thought it would tend towards segregation. Compulsory purchases were confirmed in 1968 and later that year Amanal Ali and Mohamed Bashir, both ‘Pakistanis’, died in a fire in a clothing factory in the yard. In 1970 the GLC changed tack, recommending that the site’s owners be themselves allowed to redevelop. But the jewellery trade continued to decline and Levrant shut up shop. A closure order in 1977 was followed by clearance to make way for the relocation of the Salvation Army’s Hopetown hostel, to open the way for housing development further north.2

The freehold of much of the land along Whitechapel Road had been acquired by Lyndon Properties Ltd (Irish developers). From 1977 they proposed a seven- storey office block and four-storey industrial/warehouse unit, and agreed to undertake this collaboratively with the GLC (with Tower Hamlets Council also co-operating). The scheme was agreed in 1978 with provision for a public walkway (what became the new King’s Arms Court). To guard against the developers building the offices and leaving the industrial unit unbuilt, so failing to provide the kinds of jobs that the councils sought, the GLC agreed in 1979 to buy the freehold and to sell the office site back on completion of the industrial building, which it would then acquire. However, Lyndon Properties revealed that they in fact held only a lease of 85–95 Whitechapel Road (the south-east part of the site). The GLC anyway prevailed on the developer to erect the industrial building first, to the east of Nos 57–59 obliterating the last of Black Lion Yard. It went up in 1980–1 to plans by John Spratley & Partners, architects (Martin R. Warne, job architect). Of three four-storey blocks, linked by staircase bays that were originally open, it was clad in pinkish brick under a mansard with Thrutone blue asbestos cement roof cladding. There were sixteen industrial units and the plans were revised to incorporate shops at either end. It opened as the Whitechapel Technology Centre (65, 75 and 85 Whitechapel Road). Among early tenants were SDM Computer Services and Tower Hamlets Advanced Technology Training. By 1988 the Centre (sometimes the Whitechapel College of Technology) was run by London Industrial PLC and used to construct and repair computer equipment. The staircases were enclosed with glazing in about 1989 and in 2015 the building was painted black and renamed East London Works. It accommodates a range of businesses, including some architectural firms.3

Lyndon Properties saw through the other western part of their project in 1982–3, again employing John Spratley & Partners as architects for the seven-storey speculative office block (with ground-floor shops) that is Black Lion House (No. 45). Its sleeker if bulkier Modernism included polished marble and brown metal cladding.4

Behind these buildings there remained a sizeable empty plot. This was used as a car park, but the Greatorex Street end was built on in 1989–90 by London Industrial PLC. Magenta House, 85 Whitechapel Road, was a four-storey block for offices and light industry, designed by Architects Group Practice.5 It was short-lived, replaced in 2011–12 when the rest of the car park was also built on for student housing, retaining the name Magenta House for iQ Student Accommodation. This development comprises three five- and six- storey blocks north of a gated passage, for 187 bedrooms with shared living and dining spaces, designed by Aros Architects for Capitalise Assets/Watkins Jones. There are white rendered elevations above granite plinths (a graffiti deterrent) and with irregularly arrayed bronze-coloured aluminium windows. Another part of the development was the bookending of the Technology Centre by identical metal-clad four-storey shop and office buildings, that to the west replacing Nos 57–59, that to the east on a previously open plot on the Whitechapel Road/Greatorex Street corner. In 2017 the shops house Quiznos Sub sandwich restaurant (west) and Sunnamusk Arabian perfumes (east). In 2020 Black Lion House is being raised by three storeys to be a 280-room hotel (Hyatt Place London City/East), and extended to the rear with a single-storey office pavilion. This is being done for Resolution Property with the Berkeley Capital Group, to plans by Buckley Gray Yeoman architects, with Galliford Try Building Ltd as contractors.6

45 to 85 Whitechapel Road - early history including King's Arms Court and Black Lion Yard
Contributed by Survey of London on March 29, 2017

The original Black Lion House (on the site that was later that of 37 Whitechapel Road) was with adjacent properties held in the 1760s by Paul Johnson, a ropemaker, and then, in the 1790s, by his relative James Exeter. James Davenport, a surgeon instrument maker, was at the site of No. 33 in 1790 and the Windmill public house was at that of No. 41 early in the eighteenth century.1 Between what became Nos 43 and 45 was the entrance to Size Yard, a builder’s yard with four or five houses. These and others nearby (seven in total) were destroyed by fire in 1783. Edward Colebatch, a builder, was probably responsible for reconstruction; in 1790 he had a workshop and other premises here.2 The builders’ yard passed to Joseph and James Little by 1810, then to Thomas Little. There was also sugar-refining in Size Yard from 1808 to the mid 1820s. After another huge fire in 1873 that fed on Little’s stocks of timber, there was extensive rebuilding. The Whitechapel Road frontage was redeveloped in 1884.3 From 1894 what became No. 47 was Isaac Abrahams & Sons cigar factory, destroyed in the Second World War.4

In the early eighteenth century, the King’s Arms public house was at the site of Nos 55–57, about where King’s Arms Court now meets Whitechapel Road. Under it was the entrance to Coles Alley (later King’s Arms Court). In the 1770s the King’s Arms had a skittle ground, a brewhouse (with a malt shop, loft and cooler over the passage), a millhouse and three houses, extending back to the Cock and Key public house at what ended up as 52 Old Montague Street.  William Menish (d.1813, age 79) held all this property by 1770 and extended his tenure with a 99-year lease in 1779. A chemist, Menish was later identified as a ‘sal-ammoniac manufacturer’, having patented the production of sal ammonia by a sulphate process in 1792, for use by jewellers and stained- glass makers, possibly also in foodstuffs. Menish was manufacturing hartshorn (ammonium carbonate), probably for medicinal purposes, at 111 Whitechapel Road in 1805, in which year he sublet his Coles Alley premises to John Burnell, a horner of Old Montague Street. At this point, John Warner had a foundry on Coles Alley.5 The King’s Arms public house retreated to the west side of the court entrance (No. 57) and William and Henry Clayton, drapers, held sway at the site of Nos 53–55 from a rebuilding of 1847 to 1890–1 when those premises were adapted to be Tee-To-Tum Tea Stores, a café and club for the Tea Planters’ Association, with A. H. Thompson as the architect.6

Black Lion Yard was present by 1674, probably formed earlier in that century. It was entered between what became Nos 75 and 77, the eponymous Black Lion public house being on the east side up to the 1770s but apparently no later. The yard was humbly built up, extensively by 1680 and solidly with as many as fifty small houses by 1728 when it accommodated a molly house (a place for gay men and transvestites to gather) owned by Jonathan Muff (aka Miss Muff) where nine ‘male Ladies’ including Muff were arrested, sex between men then being a capital offence. A small court off the west side towards the south end was an abortive stump of what had been intended to be a larger development that was to have been called Crowe’s Court. Confusingly, there was a Red Lion public house on the east side of Black Lion Yard by 1750 up to about 1900. John Chapman, the victualler there in the 1830s was also a surgeon’s instrument maker. By this time the ownership of property hereabouts was fragmented. In 1891 the Census recorded 264 people residing in Black Lion Yard, said in Booth’s survey to be a mix of Irish and Jewish. In 1903 a synagogue was built behind what later became No. 14 (half-way along on the east side), the work being done for A. Cohen to plans by P. Cornish. Around this time the small two- to four-storey shophouses that lined Black Lion Yard began to become a centre of the Jewish jewellery trade.7

In 1723–5 John Bartholomew, a bricklayer, and Robert Abbott, a carpenter, both of Whitechapel, built a 32ft-front house with a workshop close to Black Lion Yard. It was first occupied by John Cordwell, a framework knitter.8 There was a break in the building line between Nos 83 and 85 (present until the 1970s) that marked the entrance to Trumpet Court, another seventeenth-century development of some 20–25 houses.9 From the site of No. 61 east to the corner with Great Garden Street there were piecemeal rebuildings, Nos 61, 63, 67, 69 and 89 all being replaced in 1848–53, Nos 91–95 at the corner in 1886–7 (following the widening of Great Garden Street) and Nos 85–87 in 1925.10 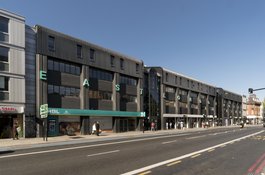 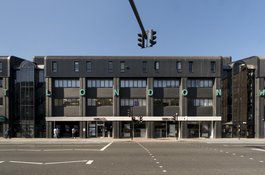