There was a sugarhouse on Church Lane’s east side opposite Colchester Street (later Manningtree Street) by 1769, when it pertained to James Greenhow. It passed to Davey & Hounsom, John Doorman and Thomas Hodgson up to 1831. North of where John Street (later Assam Street) was formed in the early nineteenth century, there were livery stables, possibly built around 1772 with six houses when the manor of Stepney ceded freehold possession of two acres on Church Lane’s east side to Samuel Bull and John Thompson Bull. The Fir Tree public house was at the south end of the east side by 1760, adjacent to a site later taken for John Furze’s brewery.1

Plain three-storey brick mid nineteenth-century buildings replaced the eighteenth-century sugarhouse. Dining rooms at No. 12, run by Alfonso Pappalardo in the 1930s, were held by Narian Singh from the early 1940s to the early 1950s; this was among Whitechapel’s earliest Asian-run restaurants. Next door, No. 14 was the Hindustani Markaz (Indian Centre) in 1944. John Perkins, a cork merchant and manufacturer, had preceded at No. 14 from about 1840 into the twentieth century. He was building in 1848 and again in 1880 when a two- storey warehouse was reconstructed after a fire, with R. L. Curtis & Sons as architects. At No. 16, two second-floor rooms above Alice Romanoff’s tobacconist's shop were taken in 1900 for the Russian Free Library, moving from 29 Whitechapel Road. These heavily used premises, run by Alexei Teplov here up to 1904 with extensive holdings of Russian books and journals, were described in police reports as a rallying centre for Russian revolutionaries in London. In the mid twentieth century Bonn & Co. Ltd had a large biscuit warehouse behind Nos 16–32.2

To the east of these buildings and immediately south of the churchyard there was a timber yard by the 1790s, opening off newly formed Union Street. Here Mountford Street was formed in 1846–51, laid out as a dogleg cul-de-sac with twenty-two two-storey houses. On the north side of the Union Street corner (south of the rectory garden) a warehouse of 1855 was rebuilt in 1883 as G. Page & Son’s boot factory and warehouse, J. W. Brooker, architect. After the Second World War Buck & Hickman took this site and the Mountford Street houses that had survived bombing were cleared.3

The present building was part of a residential and retail development for Ballymore Properties. A first scheme of 1997 by CZWG Architects and seen as an extension of the Aldgate Triangle scheme to the east was superseded. The block was built in 2000-2 to plans prepared by Michael Squire and Partners, architects, with Robert Bochel as job architect. The White Church Lane site took one of two long five-storey blocks of flats with balconies to the rear. There is grey facing with projecting half-dormers that step up, a colourless echo of Ralph Erskine’s higher-profile and contemporary Millennium Village on the Greenwich Peninsula. 4

My grandfather Harry Kleiman, and then my father, Alfred Kleiman, had a woollen merchant’s shop at 28 White Church Lane from before World War 2 to the mid-1960s when my father relocated the business to the West End. I have vivid memories of spending time there during school holidays in the 1950s.

My father, Mr Plunkett and Dorothy
Contributed by paul2 on March 1, 2018

Inside my grandfather's shop at 28 White Church Lane there was a long wooden counter running down the left hand side. Behind it, running right down and along the wall, were shelves stacked with large bales of woollen cloth that were woven in the mills of Yorkshire.

My grandfather had retired by the time I used to visit the shop. My father ran it, assisted by Mr. Plunkett (never knew his first name, it was always ‘Mr. Plunkett’). The doorway at the back of the shop led up some rickety stairs to the small office, where the secretary Dorothy could be found (always ‘Dorothy’, never knew her surname). The thing I remember most about that office was the large telephone switchboard - the classic one with all the wires and plugs. I used to happily spend hours playing with it. Thinking about it now, I’m not even sure it was connected to anything, but might have been left over from the previous occupants.

Both my father and Mr. Plunkett were experts at cutting the measured cloth in a straight line using a large pair of shears. I still have them: 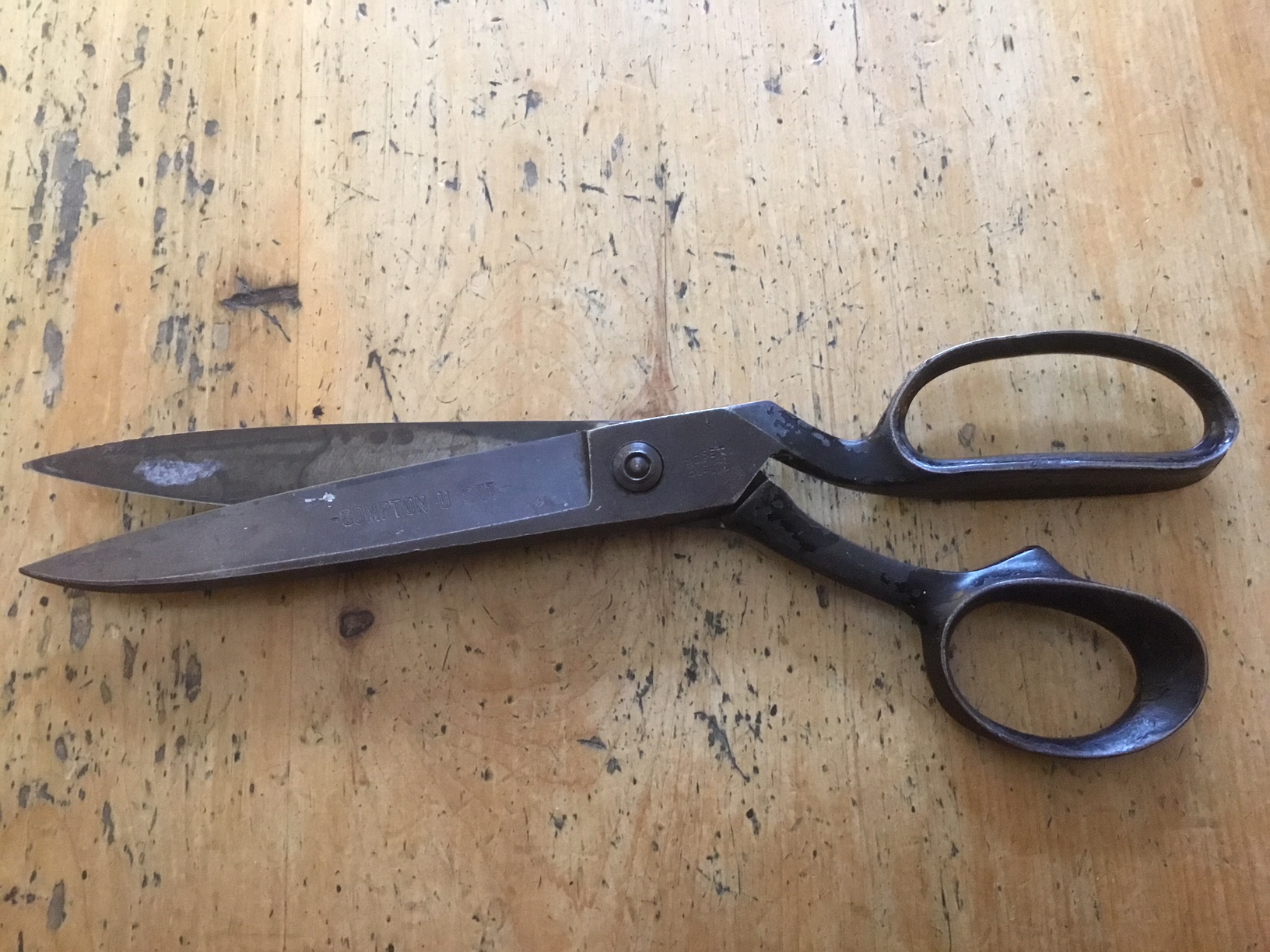 Just along the street from the shop there was a gap between the buildings which I’m pretty certain was bomb damage.

The neighbourhood was, then, a very Jewish neighbourhood. I remember there was a constant stream of people coming into the shop. Sometimes to buy, sometimes to just say hello and chat.

The photos here - http://www.dailymail.co.uk/news/article-2101018/Rabbis- rags-rainy-Whitechapel-Stunning-photos-celebrate-Jewish-life-post-war-East- End.html - capture a lot of what I remember. My father could well have been in some of those photos. 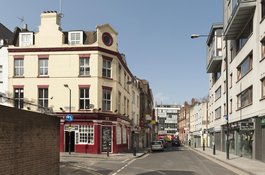