The site at the corner of Commercial Road and Back Church Lane formed part of Benjamin Masters’ and later Samuel Gower’s landholding in the eighteenth century. A few small buildings, possibly a cooperage, may have been present by 1731, but the site was probably mostly used as commercial garden ground and only developed on Joel Johnson’s building leases from 1758. Occupants in the 1760s and ’70s included, inter alios, John Man, possibly a Mansell Street carpenter.1 In 1764 a new building was being run by Evan James as the Statute Hall, an employment agency for domestic servants, a measure perhaps of the perceived supply of such labour in Whitechapel. It only lasted until 1768, when James consolidated the business in Tottenham Court Road.2 Thereafter its cellars and a large warehouse at the corner with Back Church Lane were used by William and later Samuel Read, Whitechapel High Street distillers, and by the Bullock family of the Swan Brewery in Osborn Street. A row of nine cottages, Statute Hall Court, had been built running south from Church Lane by the 1790s.3 By 1818 the freehold of the whole site was held by Robert Campbell of Blackheath (1738–1828), who owned the white-lead works in Buckle Street established by his father-in-law, Sir James Creed. Occupants included a straw-bonnet maker and a house painter, there were extensive stables, a wheelwright’s yard, a building formerly ‘the auction mart’ and thirteen small houses. The former Statute Hall was occupied by oilmen and tripe boilers.4 The site was acquired in 1868 by the MBW for the Commercial Road extension. The building line was set well back for development in 1873–4 on an eighty- year lease by the Improved Industrial Dwellings Company, which also had a smaller site opposite, identically developed. Morrison Buildings South was effectively two conjoined five-storey blocks of the same old-fashioned type as devised by the Company’s founder, Sydney Waterlow, and his builder–contractor, Matthew Allen. With fifty-four flats, these buildings included workshops, possibly in the basement.5 Morrison Buildings South survived wartime damage to be acquired in 1961 by Palaville Ltd, a subsidiary of London Merchant Securities (LMS), the company run by the East End-raised property developer Max Rayne; this was a then rare foray away from the West End.6 Permission was secured in 1967 for a six-storey warehouse and showroom building on the site, but subsequent applications shifted to a more mixed scheme including offices. Morrison Buildings South was not demolished until 1975 when construction began on what was occupied by 1980 as purely an office building, permission for the planning change reputedly having been secured by the developer’s promise to pay for conservation work at Christchurch, Spitalfields. The six-storey building was in the Brutalist-Expressionist commercial style of the period, faced in prefabricated textured concrete panels, chamfer-edged with tapering window aprons; the top two floors to the rear were in a mansard. Principal occupancy was as an employment office, latterly JobCentrePlus. With the rise in the attractiveness of the City Fringe to investors and a reduction in the number of job centres, the building was slated for redevelopment by Derwent London, created in 2007 when Derwent Valley acquired LMS and its property subsidiaries (including Palaville), by then run by Rayne’s son Robbie.7 A project for a nineteen-storey block of 417 student rooms, to help meet the ‘massive under-supply of accommodation’ for students in Tower Hamlets, was approved in 2010. A twenty-one-storey scheme had been refused in 2009 on grounds of height. The site was sold to Generation Estates and the Carlyle Group and cleared in 2013. The new building went up in 2014–15 with Buckley Gray Yeoman as architects, Wates Construction Ltd as main contractor. It opened as Pure Aldgate, run by Pure Student Living, a subsidiary of Generation Estates/Carlyle, which then sold the building, along with all its other Pure sites, to LetterOne Treasury Services.8 With its tower near the corner, the building has massing similar to that of Nos 52–58, and it steps down on Commercial Road to meet its neighbour’s podium. However, the architects eschewed otherwise locally prevalent blandness. The façade, inspired by, inter alia, the texture of basket-weave, and David Walker’s One Coleman Street (2002–7), is articulated by precast concrete frames reflecting but not part of the structure, which project and recess alternately creating a distinctive pinking-shears-cut profile. These frames contain aluminium-frame windows and thin strips of tile, terracotta in colour for the main buildings and cream in separating elements between the tall and lower blocks. The effect is eye-catching and makes this less massy than neighbouring buildings. The ground floor houses student reception and communal areas on its deep east side, and a unit for retail or office use on the west side. Further student communal areas, a cinema room, gym and residential rooms are on the first floor. There is a students’ ‘sky lounge’ with an outdoor area on the nineteenth floor and further roof gardens on the lower blocks. The student rooms are mini-studios, the smallest 175 square feet, or double units with shared kitchen and bathroom, from 340 square feet. From 2017 student rooms were made available in summer months as Pure City Stay Aldgate, short- term holiday lets. In 2018 the building became iQ Aldgate after the student accommodation provider iQ acquired Pure Student Living.9 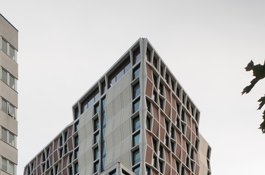 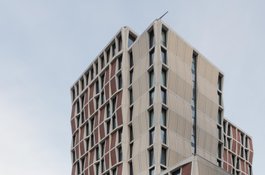